Writer of nearly 2,800 Star columns has turned some of them into a book 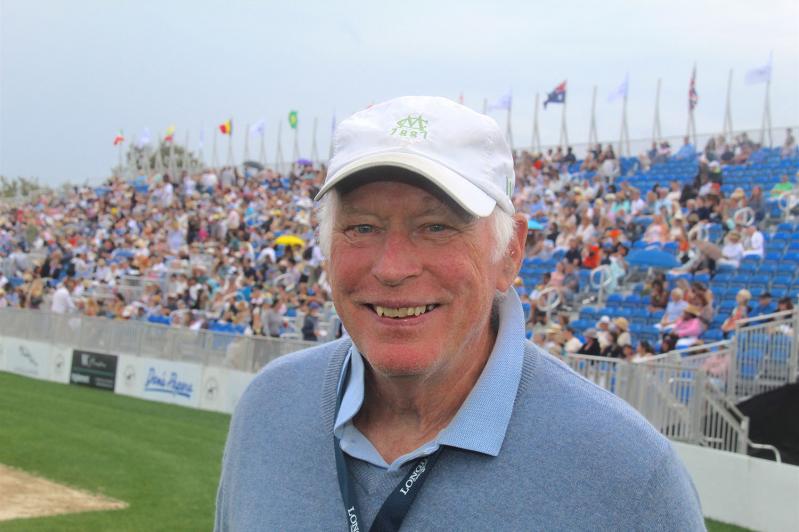 Jack Graves, seen here at this year’s Hampton Classic, is a longtime columnist and sports editor at The Star.
Durell Godfrey
By Christine Sampson

Jack Graves usually sits down to write his East Hampton Star column, “Point of View,” each Wednesday without a predetermined subject in mind.

“Was it de Kooning who said, ‘I see the canvas and I begin’? I do think it’s an advantage to not have anything definite in mind,” Mr. Graves, a fixture at this newspaper since Oct. 15, 1967, said in an interview this week. “Then you become too focused.”

But he did focus on one particular project during the Covid-19 pandemic, when, like many, he involuntarily found himself with too much free time: collecting the best of his columns into a new book, “Essays From Eden.”

Mr. Graves is a storyteller who often waxes philosophical — “those thoughts you have at 4 a.m.,” he said. He’s also frequently inspired by his wife, Mary Graves, who is “a lot of fun to write about.” She sometimes previews his columns before he files them, and she edited “Essays From Eden.”

“We’re good copy. We talk and laugh all the time,” Ms. Graves said this week.

Included in the book is one of his more controversial pieces, titled “Back to the City,” from February of 1987. Somehow, that winter, East Hampton was packed “just like summer,” Mr. Graves said. The column is (in)famous for the line “back to the city, scumbags,” right at the very bottom.

“You couldn’t get into the movies. You could hardly move, and everybody was nasty and beeping their horns,” he recalled. “I got the urge to be nasty back. . . . I got hate mail for six weeks straight.”

Most of his columns, though, are of a friendlier, wittier, more sophisticated variety. One of his favorite topics to write about is “the American spirit,” perhaps in an effort to preserve it.

“I’m really quite interested in that,” Mr. Graves said. “It’s just awful to think that it might be dying — that kind of can-do, all for one, one for all” attitude.

And sometimes he’ll be inspired by his golden retriever, O’en, the goodest of good boys, whom he calls “an avatar, an exemplar.”

“He embodies the American spirit. He’s open to everyone; he’s not prejudiced. He has a good sense of himself but he loves others. . . . O’en is a great democrat — lower-case democrat.”

His “Point of View” column affords Mr. Graves the opportunity to write outside of his sports beat, which he took on some 42 years ago after many years covering town board meetings and other news. “Frankly, it keeps me young in spirit,” he said. “I still like watching the teams. . . . It’s been great fun, and it still is. Mary thinks I have too much fun sometimes.”

Mr. Graves is an avid reader of many “really terrific essayists,” including Michel de Montaigne, his favorite, as well as famous speeches, like Abraham Lincoln’s. “You read them and they get into you — not so much what they say, but how they say it.”

Making a book out of them was Kathy Kovach’s idea. The Star’s former production manager, Ms. Kovach laid out pages of text that had been checked over numerous times by Mr. Graves and Ms. Graves and by Isabel Carmichael, one of The Star’s tireless, sharp-eyed proofreaders.

Robert Lipsyte penned the foreword, calling Mr. Graves “a gift from another time.” “Essays From Eden” has also been endorsed by, among many notable folks, Mike Lupica and Tom Clavin.

“Jack Graves has long been a colorful and wise chronicler of life on the East End, and this collection is a delightful reminder of what a magical place it is,” Walter S. Isaacson, the author, journalist, and university professor, wrote.

Mr. Graves’s book, which is self-published, can be bought at BookHampton, at East Hampton Indoor Tennis, or in The Star’s Main Street office for $20. On Saturday, Nov. 27, at the East Hampton Library, he will read from its pages and sign copies from 4 to 5 p.m. And “Point of View,” of course, continues each week in The Star’s editorial pages.

“Most of the columns in the book I’m rather proud to have written,” Mr. Graves said. “For the most part, I think the tone is good. Not that it’s cavalier, but it’s light. I had been signing a few books ‘sportively yours.’ Then I looked that up, and the second definition was ‘lustily yours.’ I’m now signing it ‘lightheartedly yours.’