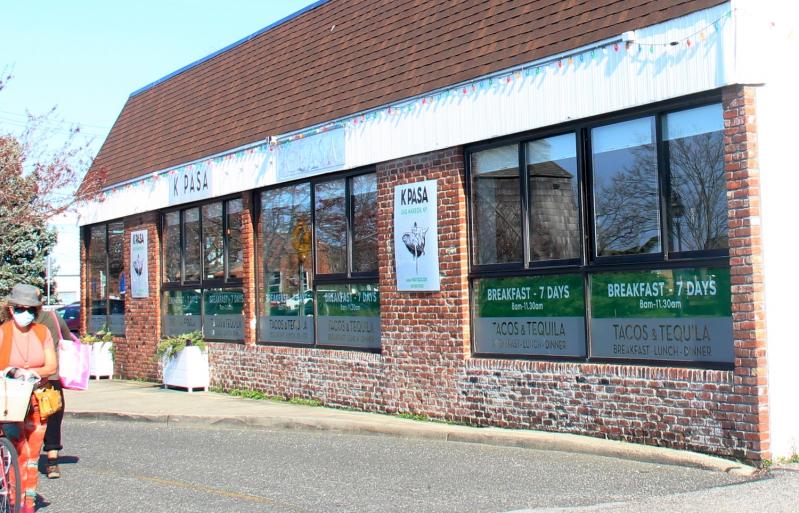 The building at 2 Main Street in Sag Harbor has become a key part of Bay Street Theater's plan to reshape the area of the village adjacent to the parcel on which it plans to build a new theater.
Durell Godfrey
By Jamie Bufalino

A group of investors has purchased 2 Main Street in Sag Harbor Village, home to the K Pasa restaurant and other businesses, and is seeking to have Southampton Town purchase the building with community preservation fund money, according to Mayor James Larocca and Lisa Kombrink, the town's C.P.F. manager.

The building has become a key part of Bay Street Theater's plan to reshape the area of the village adjacent to the parcel on which it plans to build a new theater.

Last fall, the theater announced that it had purchased the site of the Water Street Shops building, a parcel next to John Steinbeck Waterfront Park, for the new theater, and that Friends of Bay Street, a nonprofit organization, would develop the property and finance the project.

During a presentation of the architectural renderings of the new theater in April, Adam Potter, the founder of Friends of Bay Street, said the theater planned to buy 2 Main Street, "remove the building, expand the park, and create unbelievable views down Main Street."

At a presentation in May, he made a clarification, noting that a separate group of investors, not Bay Street or Friends of Bay Street, was seeking to buy 2 Main Street and sell the property to the town. If the deal is finalized, he said, "this company will likely lose money," but the investors were eager to see the land used as an extension of Steinbeck Park.

At a village board meeting on Sept. 14, Mr. Larocca announced that the building had been sold. Rose Cheng, the owner, had sold it to a limited liability company called 2 Main Street L.L.C., he said. Ms. Kombrink later confirmed that the company is seeking to have the property purchased by the town.

Mr. Larocca, who had helped former Mayor Sandra Schroeder acquire the land for Steinbeck Park in 2018, said he was pleased to see that the new owners of 2 Main Street are following through on the promise to use the property as an extension of the park.