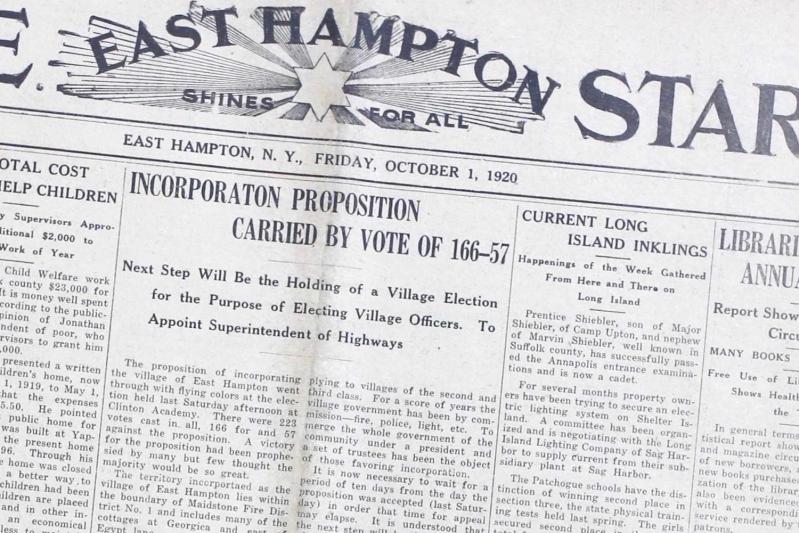 "Incorporation Proposition Carried by Vote of 166-57," read the headline of a story in the Oct. 1, 1920, issue of The East Hampton Star, a few days after residents voted to form a new Village of East Hampton. (Note that The Star was published on Fridays in 1920!)
By Jamie Bufalino

When East Hampton celebrates the 100th anniversary of the village's incorporation this weekend, it should raise a toast to summer visitors, without whom the milestone would not have been reached.

Back in 1920, "it was the summer residents who pushed for incorporation," said Hugh King, the village historian and grand marshal of Saturday's centennial parade. "People began to realize the town wasn't going to push for improvements in the village, because it had too many other areas to worry about. The summer residents weren't stupid, they realized that by incorporating you'd get better roads, water, fire protection, and more."

The question of whether to incorporate had been put up for a vote three years earlier, and it was defeated by a slim margin. By the time the vote was held on Sept. 25, 1920, at Clinton Academy, however, public opinion had shifted. "Judging by the present public expression the proposal will pass this year by a large majority," a writer for The Star predicted in a front-page story that ran the week before the vote.

Because the election was held one year after the 19th amendment to the Constitution was ratified by Congress, it provided the women of East Hampton their first opportunity to vote, according to Mr. King.

The second vote for incorporation resulted in a landslide, with 166 people voting in favor of it, and just 57 against. Even The Star was surprised by the lopsided result. "A victory for the proposition had been prophesied by many but few thought the majority would be so great," the newspaper noted in a report on the outcome. "The need for a more central form of government has been felt for some time by the progressive element of the town, including many summer residents," the piece said. "For a score of years the village government has been by commission: fire, police, light, etc. To merge the whole government of the community under a president and a set of trustees has been the object of those favoring incorporation."

A few weeks later, village residents elected Jonathan Baker as the village's first mayor (or president, as the position was then known), and J. Edward Huntting and Edward M. Gay as trustees. "All of the officers elected are prominent business men of the village and we feel sure will prove capable of managing the village affairs," said The Star.

The village's centennial celebration, delayed by a year because of the pandemic, will start tomorrow at 11 a.m. at Village Hall with a blessing of the village by local religious leaders, and the placement of various objects in a time capsule. Talks about the history of the village will be held at 2 p.m. in Herrick Park, and a black-tie gala will be held at the Maidstone Club at 7 p.m. Tickets cost $350. The village's annual fireworks display, which had been postponed due to a hurricane forecast in August, was to be held at Main Beach on Friday night but was cancelled due to weather.

On Saturday, there will be a children's fair with carnival rides starting at 9 a.m. in Herrick Park. A parade down Main Street sets off from near Guild Hall at 11 a.m., with 25 organizations marching in it. A music festival follows from 2 to 9 p.m. in Herrick Park. Food from local restaurants and food trucks will be on hand during the festival.

On Sunday in Herrick Park, a classic car show will be held at 11 a.m. Those who want to register their own cars for it can do so at northforkcruisers.org. A "Maidstoners vs. Bonackers" softball game follows at 4 p.m. The East Hampton Fire Department will grill hot dogs during the game, with proceeds supporting the department.