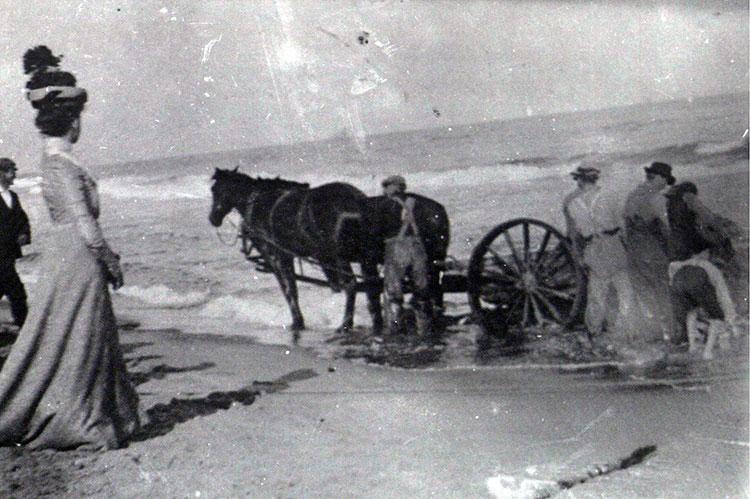 This photograph showing haulseiners working with horses, taken from the C. Frank Dayton Photograph Collection, seems like the perfect image to mark Labor Day weekend and the final days of the summer season. It shows laboring fishermen, with a crew of at least five men and boys gathered around a horse-drawn cart apparatus with wagon wheels, working in surf up to their ankles. The beach where the photo was taken and the people photographed are unknown.

This picture captures the labor of fishing crews here in the days before four-wheel-drive vehicles, offering a remarkable ancestor to the images from about 80 years later taken as part of the efforts to document the baymen's way of life. Those more modern ones, like the photos from "Men's Lives," the Peter Matthiessen book, show baymen working along the beaches with nets being pulled in with pickup trucks, similar to the way the horse and cart worked.

The fashionably dressed woman to the left in the photo not only helps estimate a date with her style of dress, but she also shows the contrast between many summer visitors and the local workers. The woman's dress has a style of sleeve and a lack of bustle that were popular between 1900 and 1910. A more elegantly dressed man strides toward her and the fishermen, his white collar and suit suggesting a similar social disparity with the jacketless fishermen.

The juxtaposition of the well-dressed couple, seemingly at the beach simply to stare at the water, and the laboring fishermen speaks to the social and financial disparities that still feel relevant to many in the community today.