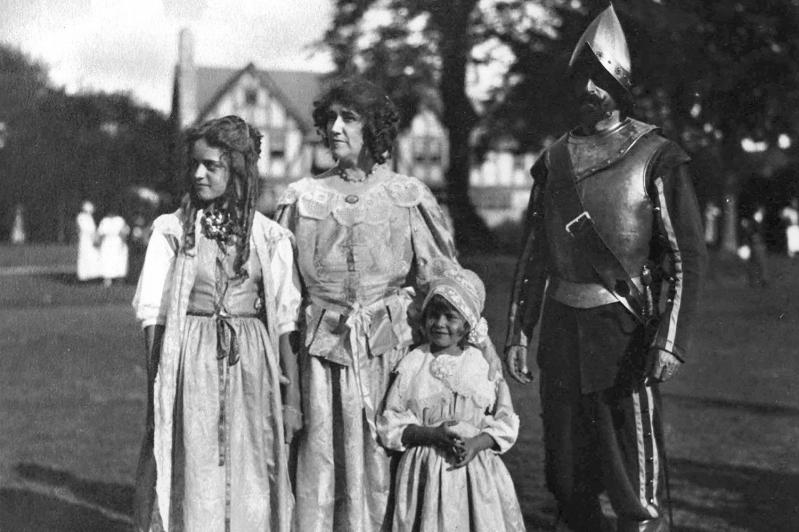 Next week, East Hampton Village begins its belated centennial celebration of the village's incorporation. Inspired by the 1920s while planning the events for this anniversary, the village also looked at many of the Town of East Hampton's large anniversary events, such as the 350th anniversary celebration in 1998. One of the earliest town anniversaries we have photographs from is the August 1924 pageant for the 275th anniversary of the town.

The East Hampton Star noted the "striking contrast" created by the Gardiner family's more lavish clothing compared to the drab Puritan style clothes of others in the scene. Winthrop's costume included a plumed helmet and a decorative breastplate. His wife wears silk, and at least one of the daughters is described as wearing rose taffeta.

Many of the other people in the pageant also portrayed their ancestors or family members. The pageant was clearly a community-wide effort; the Aug. 8, 1924, Star coverage almost reads like a list of all local residents' names.

Perhaps even more fascinating than the pageant is the photographer, outdoorsman, and author Harold McCracken (1884-1983), who took this image. He was later known for his expeditions to Alaska and his work with the Buffalo Bill Center in Wyoming. McCracken's adventures read like an Indiana Jones story, with accounts of filming while attached to the wing of a biplane, and encounters with bears. It's hard to imagine how he ended up documenting the East Hampton 275th anniversary pageant in 1924, but his photographs of the pageant, including one of Jeanette Edwards Rattray dressed as a representation of America, truly conveys McCracken's skill as a photographer.