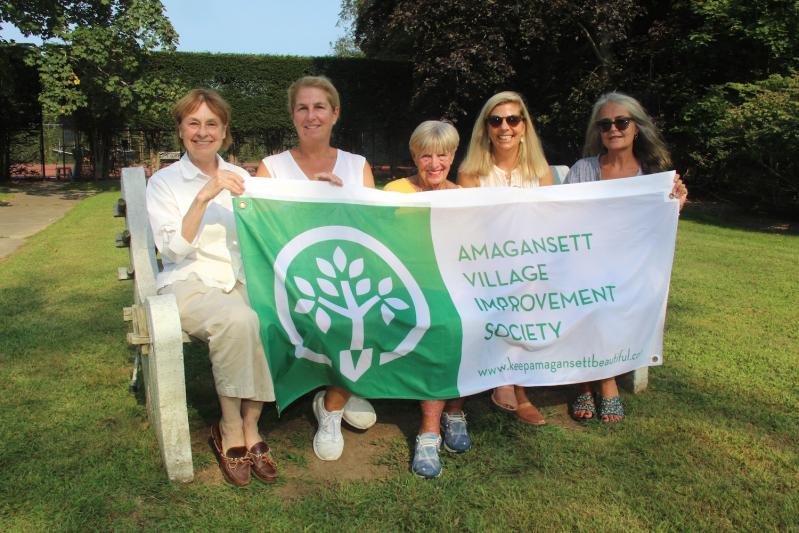 The society stated as its objectives: "The improvement of the roads, sidewalks, cemeteries, parks, and greens of the said Amagansett and vicinity, and for the improvement and advancement of the welfare and the best interest of said village of Amagansett."

As it marks its 100th anniversary, AVIS demonstrates a remarkable continuity. Now, as then, the society constitutes a committed group that cares deeply about its unassuming hamlet and wishes to preserve its inimitable charm and beauty.

The group maintains the hamlet's triangles, planters, benches, trees, flagpole, and flower boxes, and lines Main Street with flags at the appropriate holidays. In partnership with the Amagansett Fire Department, the society decorates the tree on the green at Christmastime, dispatches Santa and Mrs. Claus to meet with children, and organizes carol singing up and down Main Street.

The society grants scholarships to the hamlet's students, and offers free tennis lessons to children and adults at the John Day Jackson Memorial courts, at Main Street and Atlantic Avenue. Recently, the group conducted a cleanup of the Long Island Rail Road station, and it celebrated the start of summer with an ice cream social at Miss Amelia's Cottage.

"We just keep doing what we're doing," Joan Tulp, the society's co-president, a member of its board for more than 50 years, and the hamlet's unofficial mayor, said last week. In June, AVIS honored Ms. Tulp with the dedication of a tree and plaque at the tennis courts. She is "the heart of this hamlet," Cathy Peacock, her co-president, said at the dedication. "She loves Amagansett, and she never wanted it to change. . . . She's been the guiding light and an activist ensuring that any changes were things that benefited the community, that were a positive force."

"Of all the boards that I've ever been on, this is the best," Ms. Tulp said, gathered with fellow members last week at the Amagansett Beach Association, where a parking space is reserved for her car (license plate GANSETT, of course).

"We've never stopped doing what we do," said Michael Cinque, "whether it's trees, Main Street, tennis, flags, planters." The Christmas tree lighting, he said, "is such a really neat thing that gets everybody in the holiday spirit. That's always been our thing. Now, we've pulled it together with the merchants on Main Street, which has really made it a neat community thing."

Miss Amelia's Cottage, the Amagansett Life-Saving and Coast Guard Station, Miankoma Hall, and the Amagansett Library are among the buildings that existed in 1921 and, 100 years later, still stand, noted Hugh King, East Hampton Town's historian and town crier. Many others remain, repurposed, on Main Street, a testament, he said, to the continuity represented by AVIS.

The society was formally incorporated in 1937, and its aims and purposes were broadened to include "the preservation of historical objects, the gathering and dissemination of information concerning the early history," according to "Amagansett: Lore and Legend."

"The by-laws and constitution were again changed in 1948 to give men full membership." In her 50 years as a director, said Ms. Tulp, there has always been at least one man on the board. (Robert Hillman, she thinks, was the first.)

The group "has been instrumental in getting action taken to brick the area in front of the business establishments in the village; in having sidewalks laid; in having electric lines laid underground along Bluff Road; in getting the Long Island Rail Road to paint its station and to landscape its grounds," the book adds.

At around seven years' tenure, "I think I'm one of the newer members," said Victor Gelb, the society's treasurer, who with his wife, Cam, owns the 434 on Main bed and breakfast. "We wanted to join because we were new to the community, and it seemed like a great way to get to know people and get involved. I think what we do for the hamlet is very important. The entranceway to Amagansett is lined by our trees, and we maintain them, and replace them when needed."

The Deborah Light Triangle, the Abrams Landing Triangle, and the Howard Purcell Triangle, designed by Charlie Whitmore and Sons, and the Joseph Hren Triangle designed by Groundworks at Hrens in East Hampton, "are beautiful and add to the visual presence in the hamlet," Mr. Gelb said.

The Bayberry, too, is generous in helping with the hamlet's landscaping needs. "They love Amagansett as we do," Ms. Tulp said. "They're willing to help us any way we can."

The Covid-19 pandemic made the society's annual Summer Splash party and fund-raiser impossible to hold this year ("Definitely next year," Ms. Tulp said), but the society has managed nonetheless, thanks in part to the 2020 sale of Lyle Greenfield's eye-catching 1960 Nash Metropolitan convertible, which graced the lawn in front of Amber Waves, the hamlet's farmers market, for a while. The Amagansett resident donated the proceeds to AVIS.

Residents interested in joining the society can visit keepamagansettbeautiful.com. "We're very happy and proud of what we do," Ms. Tulp said.