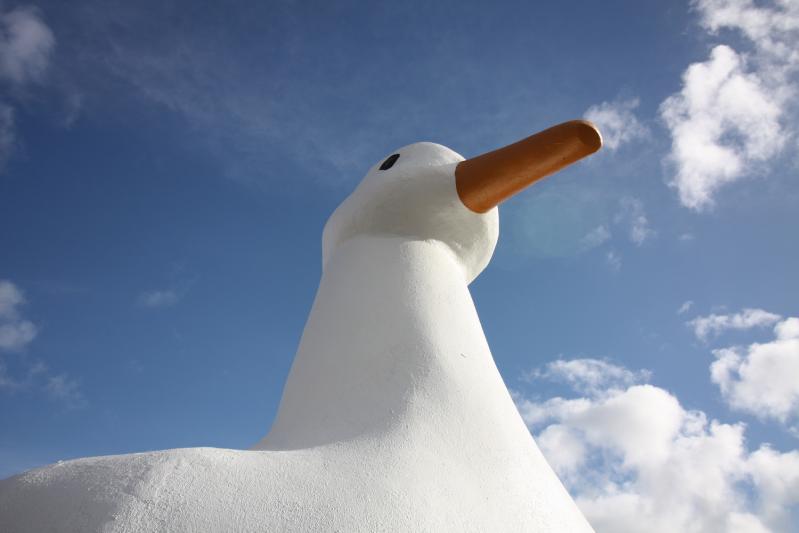 The Big Duck has reached a milestone recently, and the birthday wishes flowed.
Durell Godfrey
By Nancy Eastman

The Big Duck is a nonagenarian.

Although the life expectancy of a duck in the wild is 8 to 12 years, a big one from Long Island has managed to stay afloat until the age of 90. The Big Duck, located in Flanders, has been a Southampton landmark and legend since it was built in 1931. (Just to clarify, this one is made of concrete, it does not quack, and it has a store inside it.)

At the end of July, the Friends of the Big Duck, a nonprofit formed to preserve its history, threw it a birthday party. The on-site event included a raffle, games, a "quack-off," and an appearance by the folk singer Caroline Doctorow, who wrote an anthem to the duck, "Big Duck Ramble," which she performed at the party. Southampton Town Supervisor Jay Schneiderman was there as well; he read a poem about the landmark in celebration of its 90-year milestone.

Mr. Schneiderman spoke about his feelings toward the Big Duck in a recent interview. "Its identity is tied so much into the identity of the East End, so it's hard to imagine life without it. You think of the East End, you think of the Big Duck. I have all of these childhood memories of it, with all of the ducks in the field, too. There's something nice about seeing it always there."

In 1931, Martin Maurer built the 20-foot-tall duck and used it as a poultry shop at the entrance to his leased duck farm in Riverhead. Duck farms were common on the East End then, and "Long Island ducklings" were deemed a delicacy on high-end restaurant menus, much like Wagyu beef or Dover sole today. Maurer's business became a rapid success, not only because of the popularity of Long Island duck at upscale establishments, but also because it is pretty much human nature to spot a 20-foot-tall concrete creature by the side of the road and pull over to check it out.

With his business booming, Maurer decided to buy his own farm in Flanders, to which the Big Duck would relocate.

Mr. Schneiderman put it this way in his poem:

In Riverhead the Big Duck stood

For several years of glory

But that was just the start

With the Collins boys' design,

He began to build the duck

Out of wood, cement and wire

A fresh white coat of paint

An orange bill, the perfect size

And taillights from a Model T

"I studied the Big Duck in an architectural history course in college in Ohio," said Tom Edmonds, now the executive director of the Southampton Historical Museum. "The architect Robert Venturi wrote about it in his well-known book 'Learning from Las Vegas,' published in the early 1960s. I was, of course, shocked to see it the first time I drove by 20 years later."

"The East End, and the world, are lucky to have this imaginative icon preserved which can easily be seen by everyone. It's not the Taj Mahal -- but almost."

In the 1980s, Maurer's farm was sold to a developer, who cared nothing about anything having to do with the Big Duck. He planned to demolish it until, in 1987, two residents of Sands Point, Kia and Pouran Eshghi, saved it, purchasing the duck to donate to Suffolk County.

For 20 years the duck stood tall in Sears-Bellows County Park, Riverhead, until returning to Flanders in 2007, where it has been ever since. It currently serves as the gift shop of the Long Island Duck Farming Exhibit and Museum. Though the Big Duck has encountered numerous evictions, near demolitions, and hardships, it has managed to remain standing tall for nearly a century, a beacon to tourists and a landmark to Long Islanders.