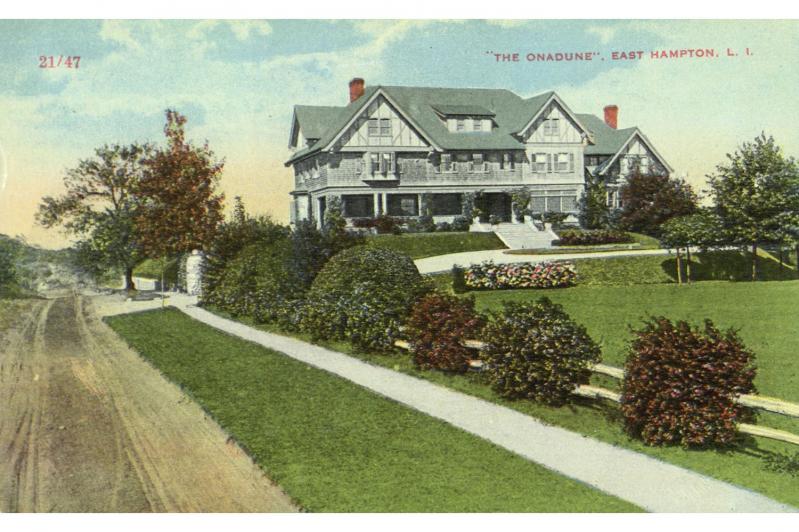 This postcard from the Harvey Ginsberg Postcard Collection shows a street view of the Onadune residence, a property at the corner of Georgica Road and the Crossways. The name Onadune is fitting since the estate's prime location on top of the dune gives it ocean views above neighboring residences.

The three-story house was commissioned in 1903 by its first owner, Sara L. Johnson, the wife of Servetus F. Johnson, a New York Stock Exchange member. She hired a local architect, John Custis Lawrence (1867-1944), to design the cottage and George A. Eldredge as the builder. This property marked the fourth residence designed by Lawrence for Mrs. Johnson.

On Aug. 22, 1903, the couple hosted a housewarming party with many summer colony residents in attendance. Refreshments were served, and Miss Harriette Cady performed on the piano. The East Hampton Star reported on the party in its Aug. 28, 1903, issue and pronounced the Johnsons' cottage "one of the most pleasantly located and costly residences in town," describing it as "Elizabethan in style" with "many handsome gables."

Mrs. Johnson rented the cottage to many people over the following years, including John D. Rockefeller Jr., who stayed there in 1907. Mr. and Mrs. E. de Clifford Chisholm frequently stayed there with Mrs. Johnson, before eventually purchasing the property by 1933. In the late 20th century, Onadune was updated and restored.