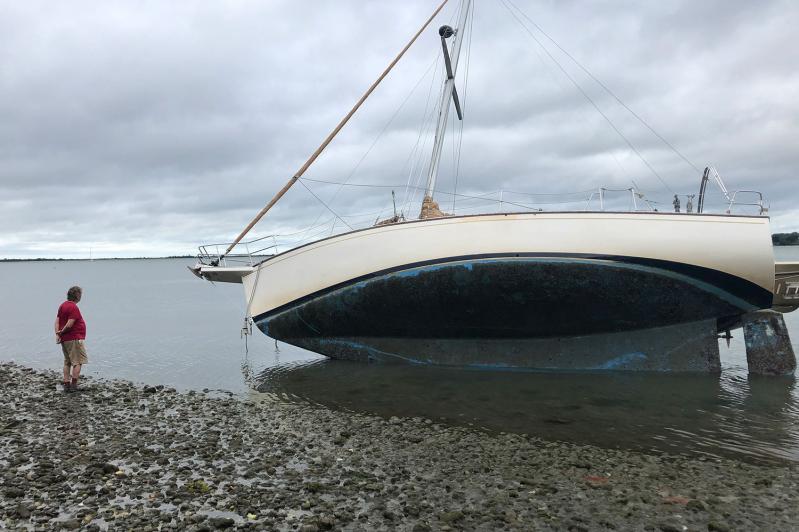 A large sailboat was pushed ashore on Three Mile Harbor on Sunday after Henri blew through, but generally there were minimal reports of damage across the East End.
Rocky Taylor
By Carissa Katz

Watching Henri gain strength late last week as it barreled toward Long Island, East Enders braced themselves for a possible direct hit from a Category 1 hurricane late Saturday or early Sunday, but by the time it arrived, its path had shifted to the east and it had been downgraded to a tropical storm, sparing the Twin Forks.

Even before New York State and local municipalities had declared a state of emergency, people here were preparing for the worst, emptying grocery store shelves and gas pumps, securing boats or pulling them from the water, filling bathtubs and checking flashlights as they contemplated what PSEG-Long Island warned could be 7 to 10 days without power.

Harvey Bennett, owner of the Tackle Shop in Amagansett, was so worried about a prolonged power outage that he gave away most of his frozen bait to customers passing through his shop on Friday. "We were supposed to get smacked big time, and I thought the odds were high the power would be knocked out for a long time," he said late Sunday. "Trust me, the last thing you ever want to deal with is rotten squid."

At the Hampton Classic grounds in Bridgehampton, where a veritable city of large tents was erected last month in preparation for the eight-day horse show, workers began the process early Friday morning of taking down 18 huge stabling tents and another 40 large tents. Crews dismantled 1,600 horse stalls, stacking their walls on the ground and lashing them together so they wouldn't blow away. The largest tents were dropped in place and lashed to the ground.

By Tuesday afternoon, most of the tents were back up. Crews were still reassembling the stables in advance of the show's Sunday opening, said Shanette Barth Cohen, executive director of the Classic. It was a massive effort, made more challenging by the fact that the show is already "a little short-handed in some areas." All concerned are still looking forward to this year's show, she said, even if they may be "a little more exhausted than we usually are" by the time it kicks off.

Seacoast Enterprises Associates, which owns four marinas on Three Mile Harbor, was taking Henri very seriously on Friday and urged boat owners to do the same. As the forecast worsened on Saturday, Peter Mendelman, president of the company, reached out again, warning captains to prepare for two to four inches of rain, tides three to five feet higher than normal, and "water up over the bulkheads." "Do NOT walk through seawater to get to your boat or to clubhouses," he warned. "You may get electrocuted." Seacoast shut down its electrical supply to the docks on Saturday night.

Not wanting to risk losing valuable equipment, "We pulled all our traps out ahead of time, we pulled the boats out," said Nat Miller, a Springs bayman. "It's fishing, it's part of what you do. This is what people don't understand: We live in the Northeast, we get hurricanes. . . . If this storm hit us like it was tracked the night before, we would be in trouble. But we lucked out."

Off the water on Saturday, as news sank in that the storm was headed our way, lines at gas stations were a dozen or more cars long. In Sag Harbor, the police department had personnel directing traffic at the stations on either end of the village. Several stations, including the Wainscott Speedway, were out of gas by Saturday afternoon.

"We had less-than-predicted storm surge at the astronomical high tide. That could have been a problem," East Hampton Town Supervisor Peter Van Scoyoc said. "But because it passed to the east of us, it was the back-quadrant winds that kept the tide to a minimum."

With memories of Irene, which hit the East End as a tropical storm in August 2011, leaving thousands without power for days, and of Hurricane Bob 20 years before in August 1991, which caused even more damage and took a path similar to the one projected on Friday for Henri, officials here readied for a major blow, both literally and figuratively.

"Our emergency preparedness planning and long-term operations plans kick in and the police, Marine Patrol, Code Enforcement, highway, and parks all step up and prepare for their roles in handling severe weather events," East Hampton Town Police Chief Michael Sarlo wrote in an email on Tuesday. "Working closely with Bruce Bates, the emergency preparedness coordinator for the town, and tying in the fire districts as well as the village, we were staffed and ready to go for the worst-case scenario."

Beaches were closed to swimmers on Saturday and Sunday and lifeguards on Saturday warned people to stay out of the water, even as expert swimmers and surfers rode the massive surf. "The dangerous storm surf was probably one of our most significant risks for this storm, and we want to take as many preventative measures as possible to avoid a tragic accident, as we have had in the past on the beach," Chief Sarlo said.

When frantic customers called GT Power Systems in Wainscott on Friday worried about the status of their permanently installed generators, "we calmed a lot of people down," said Gerard Turza Jr., one of the company's principals. "Our trucks were full of parts, extra batteries, rain gear, we had full tanks of fuel. . . . As a generator company, we have so many different contingency plans." Luckily, none of them were required.

"It's better that people are a little intimidated by the storm, because they'll prepare and stay in and be a little smarter about it," Mr. Turza said.

"This was a bit of a wake-up call," Mr. Van Scoyoc said, and a reminder to have supplies like "water, batteries, extra gasoline on hand this time of year so you don't have to rush around last minute."

In terms of aftermath, while there was some coastal erosion, "We actually might have gained sand in places," Mr. Van Scoyoc said. There appeared to be more sand at the end of Mile Hill Road on Northwest Harbor, for example, and Councilman David Lys told the supervisor that in downtown Montauk sand had apparently been pushed up onto the beach, which came as "welcome news." That did not seem to be the case in places on north-facing coastlines, Mr. Van Scoyoc noted.

In Three Mile Harbor and in Montauk Harbor, a few boats broke loose, but all told, most people agreed the East End had been very fortunate. "It was another good dry run for everyone to make sure we are all working together and on top of the potential issues," Chief Sarlo said.

Mayor Larsen, a former village police chief, agreed. "It was a good drill."