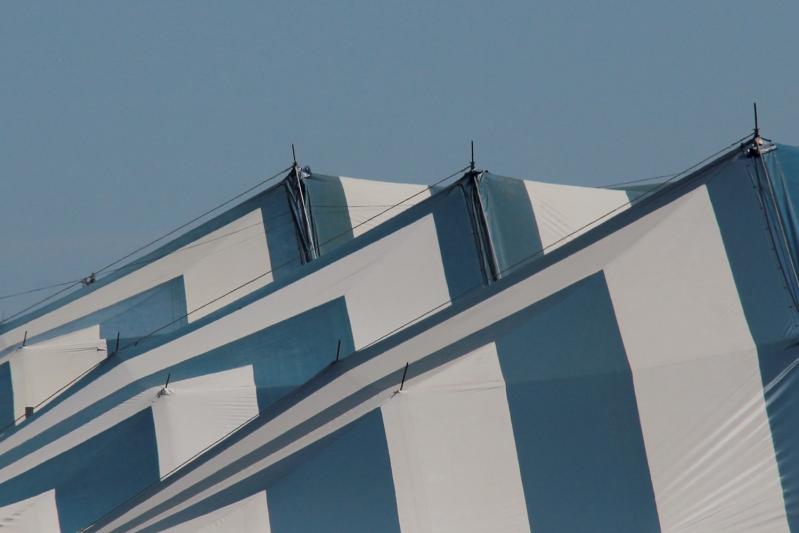 The Hampton Classics tent "mini-city" has been set up in Bridgehampton since July.
Durell Godfrey
By Carissa Katz

With the start of the Hampton Classic Horse Show just nine days out and a city of 58 large tents already set up on the showgrounds in Bridgehampton in preparation for the show, organizers announced on Friday that they are taking down all the tents and horse stables as Hurricane Henri barrels toward the East End.

"With the hurricane set to hit, we really have no choice but to take down everything,” said Shanette Barth Cohen, executive director of the Hampton Classic, in a notice on Friday afternoon. "Safety concerns trump all, and we are initiating this plan immediately and will then regroup to get everything back in place for our opening next weekend."

The Classic has 1,600 horse stalls set up in 18 tents, 40 additional large tents for boutiques, V.I.P. seating, and more, and dozens of smaller tents.

"I’m so appreciative of the amazing staff and crew who have been building our ‘mini-city’ since late July, who are now dismantling everything, and are at the ready to rebuild," Ms. Barth Cohen said. She noted the coincidence that Henri is threatening on the 10-year anniversary of Hurricane Irene, when "we had to do the same thing except that Irene came on our opening weekend and caused us to start three days late, the only time we’ve ever delayed the start of the Classic."

The Classic, set to run from Aug. 29 through Sept. 5, draws more than 1,500 horses, riders of all ages competing in 200 hunter, jumper, and equitation classes, and some 50,000 spectators. Like so many other large events, it was canceled last year because of pandemic concerns.