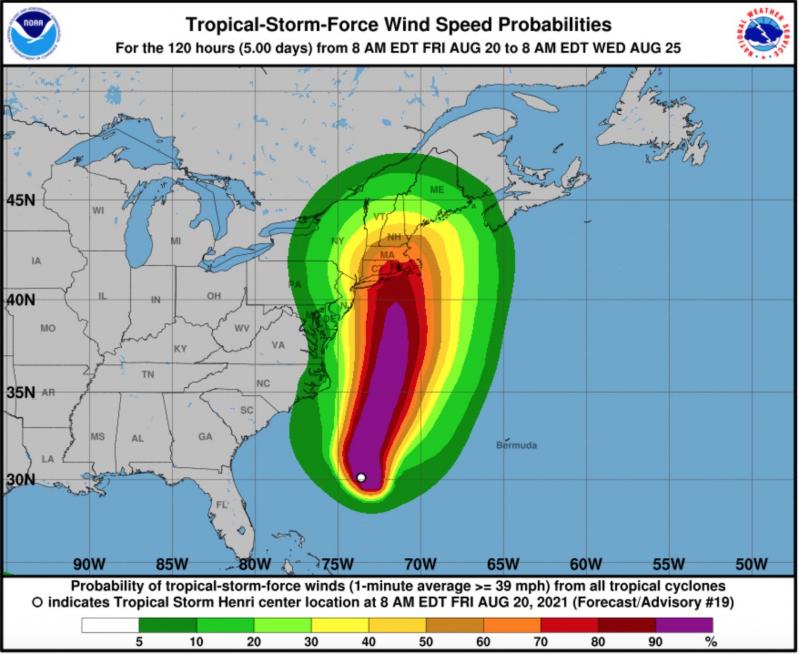 Winds and heavy seas from Hurricane Henri are expected to reach Long Island late Saturday, well before the storm itself makes landfall sometime on Sunday.

If possible, boaters should pull their vessels out of the water before the storm makes landfall, “just to be safe,” said Ed Michels, East Hampton Town’s chief harbormaster.

In an 11 a.m. advisory, the National Hurricane Center in Miami reported that Air Force Reserve reconnaissance planes had reached the storm during the morning and observed that it was poised to strengthen. Uncertainty about the actual path Henri will take remained, however. Hurricane winds are expected to extend far from the center and tropical storm winds well beyond that.

“This thing keeps changing so drastically every couple of hours,” Mr. Michels said. “I guess we're going to have to wait until tomorrow to get a closer track, but if you're worried, haul it out, or have the marina haul you out.”

The National Hurricane Center said that storm conditions on eastern Long Island were possible as early as 8 p.m. on Saturday with Henri's eye passing just east of Montauk Point at about 8 p.m. Sunday, diminishing in strength slightly, then moving inland on Monday and Tuesday.

The extent of erosion along the ocean and bay beaches will depend on when the worst of Henri reaches eastern Long Island. The evening high tides around the full moon on Saturday and Sunday were already forecast to be the highest in August, well above normal. At their peak late Sunday, ocean waves were forecast at 10 to 15 feet and higher offshore.

Mr. Michels said that if Henri reached the shoreline as a tropical storm, “that might help a little bit. Some people have issues with the surge, or the wind or rain. There are different problems caused by each one of them.”

“We have a 47-foot motor lifeboat and a crew that will be manning it,” he said. “We are a heavy-weather station, so we're capable of going out in some pretty rough weather. There is a chance that it will be out of our response parameters, but I'm predicting that will just be for a short period of time.”

Officer Schaffer echoed Mr. Michels’s concerns. “Make sure boats are securely tied to docks and that small craft like kayaks and canoes are pulled further from the shore. The Coast Guard often starts searching for a missing person when those are floating around in the water,” he said.

In a message to customers, Peter Mendelman, the president of Sea Coast Enterprises, which operates several marinas and ship's stores at Three Mile Harbor in East Hampton, called Henri a "serious" hurricane and recommended that boaters double-up on dock lines and place protective fenders alongside hulls.

A fireworks show that was to be held by the Devon Yacht Club in Amagansett on Saturday at dusk was canceled; the East Hampton Fire Department had not announced a decision about its own fireworks show at Main Beach in East Hampton Village, but on Friday morning appeared ready to proceed with the show.

The anticipated strength and path of Henri was similar to the track Hurricane Bob took in August 1991. Developed from low pressures of the atmosphere near the Bahamas, Hurricane Bob struck the Northeast including Long Island on Aug. 18, 1991. It left thousands of companies and residences without power.

Bob caused an estimated $4.5 million in losses to East Hampton and Sag Harbor boaters alone. With the hurricane changing course and hitting several states, it left over a $1 billion in damage.

With Reporting by Conor Hogan and Christine Sampson