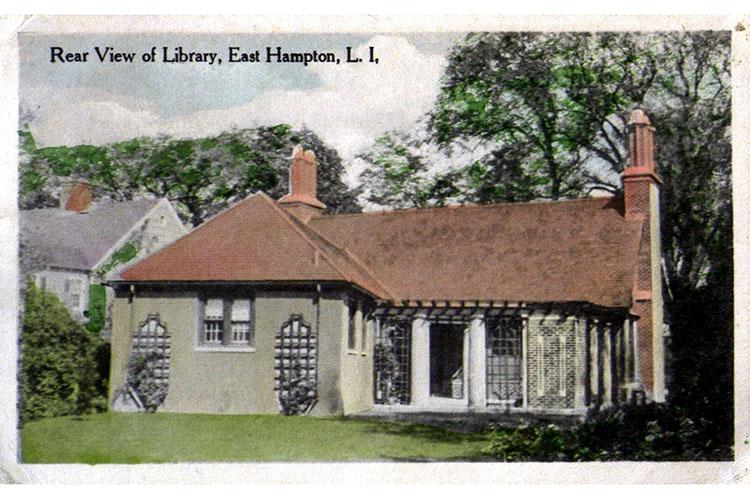 In honor of last weekend's Authors Night event, which returned to the East Hampton Library's lawn, this postcard shows the rear view of the library. This view is undated, but it shows the library as it appeared between the building's initial 1912 construction and the 1930 expansion, which created the Bendheim Room for library board meetings and the Long Island Collection. Authors Night attendees on Saturday could see the Bendheim Room and children's wing from the tent; however, this postcard shows how the building looked before the addition of those sections.

The early plans for the East Hampton Library from Aymar Embury II (1880-1966) included a porch and "formal garden" area off the porch, which connected to the stack room, reading room, and entrance hall. The East Hampton Star described the garden in 1912 as a "formal garden where shrubs and trees of many varieties surround a pretty grass plot, [with] seats, where one may sit and watch . . . the fountain."

During the 1930 expansion, the library's gardens were redesigned by Ruth Dean (1889-1932), Aymar Embury's then-wife, a famous landscape architect. Today, our library wraps around two separate courtyard areas with gardens. Ruth Dean's gardens included decorative benches that were later moved into the adult courtyard. The library gardens continue to have roses, as they had under her design. Our children's courtyard is currently undergoing its fourth renovation, creating an outdoor space for programming that's safe for children.

None of those new areas are visible in this postcard, which demonstrates how the library evolved with the community. In this postcard, another house appears practically on top of the library to the left edge. This building was known as the Purple House and is no longer standing. However, the library's distinctive tile roof and Tudor-inspired brick chimneys remain visible today.