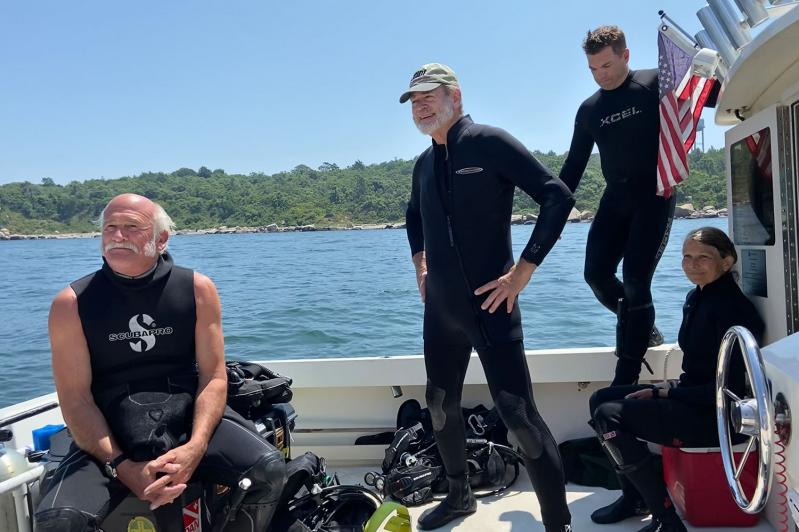 "They want you to know they are not divers, they are scientists who dive," said Louise Harrison, the New York natural areas coordinator at Save the Sound, speaking in reference to four members of InnerSpace Scientific Diving, wetsuit-clad scientists, somewhere beneath the surface of the oxygen-rich waters just off Plum Island.

The only other significant study of these waters, conducted in 2019, was smaller in scale, revealing a big opportunity to study rare coral, anemones, and an eelgrass meadow.

Plum Island, famous for the Plum Island Animal Disease Center, has a rich history and habitat that do not end at the high tide line, said Ms. Harrison. "Knowing about the island's overall biodiversity helps us understand the valuable natural heritage from which we all benefit, in ways we know and countless ways yet to be understood," she said.

Bill Lucey, Save the Sound's Long Island Soundkeeper, was volunteering as captain on one of the dive's staging boats. He flew a red and white flag to signal that there were divers beneath the surface. The crew had gone under seven times that morning, he said, each dive lasting somewhere between 45 minutes and an hour.

Once he was back aboard the boat, Steve Resler, owner of Innerspace Scientific Diving, gave a landlubber's tutorial for underwater data collection. Ten to 30 feet beneath the surface, he and his team rely on a tool called a transect. The 1-meter-by-1-meter, picture frame-like square is used to literally delineate the area on the ocean floor that the diver is sampling. Inventory is all the silt, sand, pebbles, boulders, and organisms within the bounds of the tool.

Perpendicular to the island, "the random quadrat placements along given transect lines, multiplied by the numerous times they conduct this same type of sampling, gives a good idea of what the overall bottom looks like in terms of what lives there and in what percentages and in what kind of habitat," Ms. Harrison explained.

The divers, of course, record what they see within each transect, using underwater paper, pencil, and pantomime.

Dave Winkler spoke about teamwork refined over years of working together with fellow divers Dan Morelli, Janet Klemm, and Mr. Resler. When Mr. Resler taps his temple underwater, for example, that means he already knows a species that the two divers have encountered. They grab what they cannot identify on the spot.

Mr. Morelli explained that there is visibility of about five to six feet in front of a diver in those waters, and that most specimens, even the brightest of yellow sponges, lose their color at about 12 feet. Holding a sample around three inches from his face, he said, he can make out some of an organism's particulars.

"If we removed everything in those quadrants, we'd be out there for a month," Mr Resler said.

He was excited about this follow-up to the 2019 study, unaware of anyone else doing anything like it. Thousands of new star corals growing in a different area were among the brand-new finds of this study, which will require months of above-water analysis before findings are published.

The area has "everything we like," Mr. Marelli said with a smile: not a single piece of plastic in sight and teeming with fish.

Many samples were taken, said Ms. Klemm, but not a lot of each, and they were not hauling up anything substantial, so as not to disrupt marine life.

In about 60 sample bags, Mr. Resler estimated there were anywhere from 300 to 500 specimens from "tiny things you can barely see to large things including rocks with things growing on them."

Ms. McCormack said that much of her work so far has extended into the night after the dives. Time is of the essence to preserve the sea life in alcohol. She noted that in her work pressing algae on paper, the drying process can change how the specimen looks, making genetic identification sometimes a back-and-forth process.

As a fun fact, she shared that if a name is invented for a supposedly new organism that then turns out to be one that already is catalogued, the new name is "sunk" and can never be used for scientific nomenclature again.

The project would not be possible, Ms. Harrison said, without the generosity of donors and volunteers including captains like Mike Bady of the Captain's Table, who reached out after hearing Ms. Harrison discuss the project on the New York Fishing Podcast.

In 2020, preservationists scored a major victory in their efforts to prevent Plum Island from being auctioned off to private developers. Reversing a decision made in 2008 when Congress scheduled the decommissioning of the Plum Island Animal Disease Center and sale of the island to fund the building of a new biodefense facility in Kansas, federal lawmakers in December passed a bill formally taking such an auction off the table. The island is home to more than 500 species of animals and plants, including many that are threatened or endangered, as well as the historical Plum Island Lighthouse and Fort Terry.