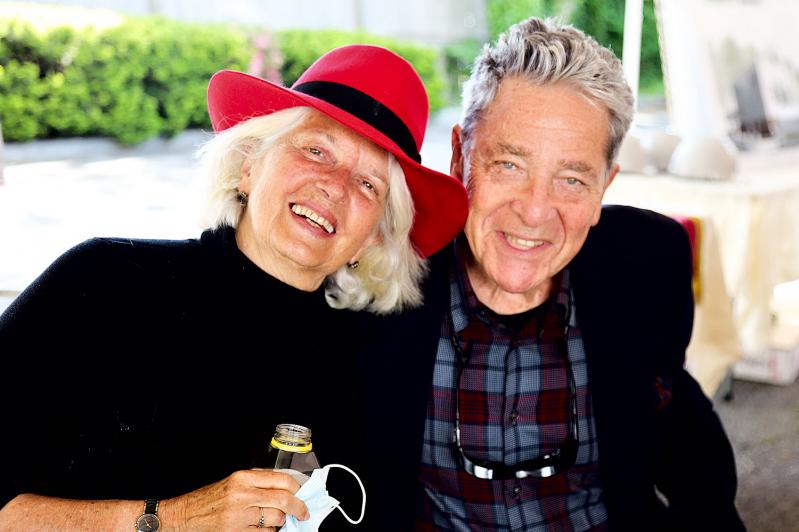 Now he's been recognized for dynamic leadership in the 2021 16 Over 61 Awards from the Marlene Meyerson J.C.C. Manhattan Wechsler Center for Modern Aging in partnership with The Forward, the Jewish online news outlet.

At age 87, Mr. Rosen has many strings to his bow. Perhaps the one most recently strung was his recovery from a life-threatening case of Covid-19. In particular, he has distinguished himself for contributing to the Jewish community by starting and running a 501(c)(3) nonprofit, staffed by volunteers who helped more than 400 Jewish emigre scientists get jobs in their fields after moving to the United States from the former Soviet Union.

He also co-wrote a book, "Career Renewal," with his wife, Celia Paul. Their aim was to help people with Ph.D.s manage their careers. His nomination for the 16 Over 61 Awards owes in part to his leadership at Temple Adas Israel in Sag Harbor and at a Manhattan synagogue.

Ms. Paul mentioned that among her husband's achievements was starting a Jewish humor group. At Temple Adas, he is co-chair of the membership committee, recruiting and welcoming new members.

The busiest, most challenging time in his life, Mr. Rosen said, was the period when he was writing a doctoral thesis on "antiprotons in primary galactic cosmic radiation."

At the same time, he had been helping his wife to "raise two energetic young children (Lisa and Danny)" while "simultaneously planning a trip to the Institut d'Astrophysique in Paris." There he worked as a visiting scientist specializing in nuclear astrophysics and cosmic radiation. Mr. Rosen worked on classified military and national defense matters at a prominent think tank and at Los Alamos National Laboratory, site of the Manhattan Project.

As an educator, communicator, and research scientist, Mr. Rosen said he relies on his wife in everything he does. "I wake up every morning to the nicest smart person — and the smartest nice person — I have ever met. . . . She is responsible for my living a robust and productive and healthy life, and thriving until today — at 87."

He shared that his wife likes to say, "To know Steve — his elan vital and joie de vivre — is to be his friend."

Projects in woodwork and welded sculpture from found objects are a big part of his life now. And he has loved his work "as a physicist, educator, author, lecturer, songwriter, humorist, and career consultant to lawyers, doctors, and scientists."

His new book, "Out on a Limb," features essays that appeared in The East Hampton Star.