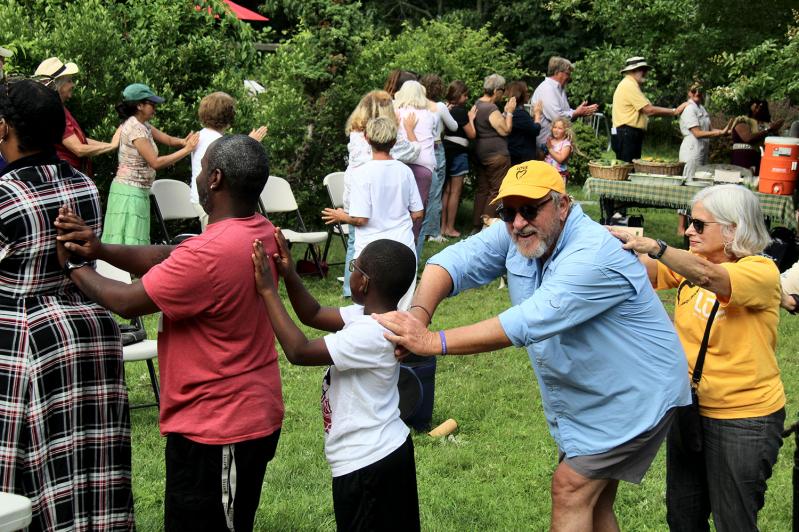 As part of East End Interdependence Day celebrations in Bridgehampton on Sunday, people took part in a welcoming circle at the Unitarian Universalist Congregation.
Durell Godfrey
By Zoe Lubetkin

While people across the country celebrated Independence Day on Sunday, many gathered in Bridgehampton to celebrate their interdependence at a multi-location event focused on unity and food justice.

It was "a huge success," Nia Dawson, an organizer, said of the event dubbed East End Interdependence Day. It featured live music, talks by community members, an open mike, and catered food at five locations on the Bridgehampton-Sag Harbor Turnpike -- the Unitarian Universalist Congregation, the Bridgehampton Child Care and Recreational Center, the Children's Museum of the East End, the South Fork Natural History Museum and Nature Center, and the First Baptist Church of Bridgehampton.

The celebration opened on the lawn of the Unitarian Universalist Congregation, where the Rev. Kimberly Quinn Johnson, Ms. Dawson, and Denise Silva-Dennis, a Shinnecock Nation elder and educator, spoke. The multigenerational crowd mingled on the lawn, while off to the side, a table from Canio's Books in Sag Harbor showcased readings on interdependence and race theory. At another table, there were locally grown cucumbers and summer squash. Near the parking lot, Jon Snow of Sagaponack led a demonstration on compost.

"This event is about how we nourish our bodies, our spirits, our relationships, and community," Ms. Johnson said in her welcome address to a crowd of around 40 people.

Participants walked, drove, or took a bus between the five locations, each chosen specifically for "what it means . . . and contributes to our overall community," Ms. Dawson said.

After Ms. Johnson's welcome, Ms. Silva-Dennis spoke of the interdependence within communities and the interdependence between the Shinnecock people and the land, alternating between Algonquin and English. "It is so much more than land to us," she told the crowd. "It's part of our blood, part of our bones, part of our ancestors." She concluded by singing a short song in Algonquin. She attended Interdependence Day because "representing the land that we are on" is important, she said, adding that the Unitarian congregation has been "tremendous allies" to the Shinnecock people in their efforts "to promote peace and understanding."

"We've all turned to ourselves," Ms. Silva-Dennis said, but the fact is, "we need each other."

Caroline Doctorow sang a short acoustic set, choosing songs that "everybody knows," and encouraging everyone to sing together.

At the Bridgehampton Child Care and Recreational Center the lawn was decorated with bright posters by children about Black history and Juneteenth. Bonnie Michelle Cannon, the center's director, welcomed visitors and spoke of the necessity of food justice in education. "If I'm hungry, I'm not thinking about learning," she said. "I'm thinking about eating."

Attendees traveled onward to the Children's Museum of the East End, where Escola de Samba Boom surprised participants with live music, and then to the South Fork Natural History Museum, before concluding at the First Baptist Church of Bridgehampton. Whereas the first locations were more focused on community activity and information sharing, the last location felt the most like a celebration to Ms. Dawson, who is already thinking ahead to next year's event.

"We've got a blueprint now," she said. Next year, organizers will look to add more musical acts and to expand attendance. "We set out a goal as a committee, not that numbers were our objective," she said. "It was to unite people . . . and it was better than I could've imagined."