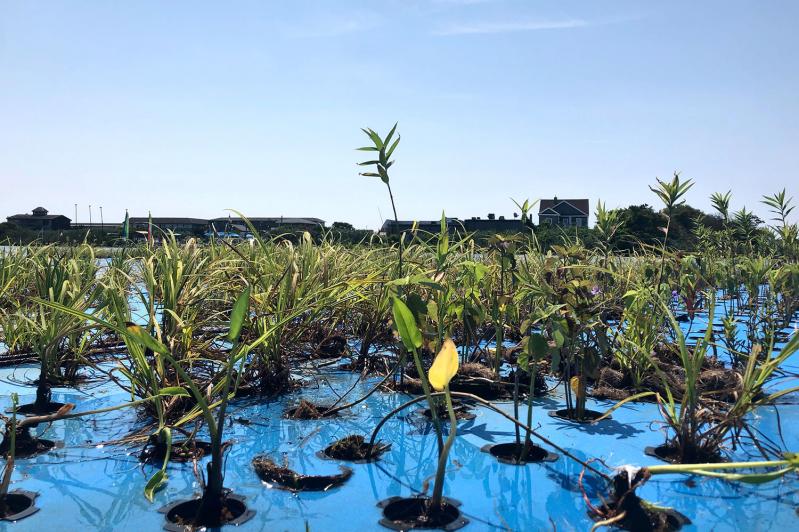 Some of the seven thousand plants that Concerned Citizens of Montauk placed on three floating wetlands in Fort Pond were displaced in a recent storm, but others are flourishing.
Zoe Lubetkin
By Zoe Lubetkin

After two months of nutrient-gobbling, the floating wetlands in Montauk's Fort Pond are healthy, if a little rattled by Tropical Storm Elsa earlier this month. The storm's strong winds flipped several of their corners and caused some of the 7,200 plants to fall from their plastic holders.

Kate Rossi-Snook of Concerned Citizens of Montauk was alerted about the dislocated plants and kayaked to the wetlands last Thursday to fix them.

The floating wetlands, installed by C.C.O.M. on May 15, have been partially monitored and cared for by paddlers on the pond and local businesses like Puff 'n' Putt, according to Ms. Rossi-Snook. "There's a sense of ownership within the community," she said. "They want to see it be a success."

The environmental group and a robust team of volunteers installed the wetlands to decrease harmful algal blooms, which Fort Pond has suffered from for years. The group chose eight species of native plants of varying heights. There are two tall flowering species, three varieties of medium grasses, and one short flower, medium flower, and short grass, all selected for their ability to remove excess nutrients and contaminants. The wetlands, accessible only by boat (often kayak), are seasonal. They will be removed in mid to late October, and a resident on the pond has offered property as a place to store them for the winter months.

Although Ms. Rossi-Snook said she was "expecting it to be bigger by now," the pilot project, and especially the community's response to it, has been "amazing." She visited sixth graders in Montauk who were excited about the project, asking "really engaged, amazing questions," she said. Other residents have been calling C.C.O.M. members to update them on misplaced plants, or righting the plants themselves. "My biggest takeaway is the sense of community ownership . . . it's really tangible," Ms. Rossi-Snook said.

C.C.O.M. will host a virtual talk on Wednesday from 4 to 5 p.m. focusing on the floating wetlands' remediation and installation. Ms. Rossi-Snook and Steve Beeman of Beemats Floating Wetlands will discuss the project. Preregistration is required, and more information is at preservemontauk.org/publications/webinars.

A Holiday Gift for Surfers and Beach Lovers
Holiday Lights Go On at the Lighthouse Saturday
Covid Vaccine Clinic at St. Luke's
END_OF_DOCUMENT_TOKEN_TO_BE_REPLACED