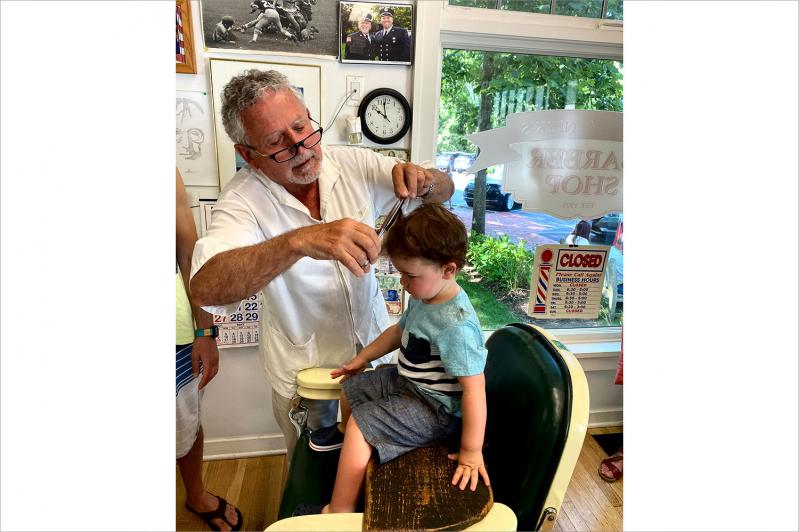 While getting his first haircut at Vinnie's Barbershop in Amagansett, 2-year-old Weston O'Brien sat on a wooden booster seat that had been used long ago in the Amagansett barbershop owned by his great-great-grandfather Pete Rana.
Tim O'Brien
By Jon Kuperschmid

A first haircut is a rite of passage for kids. Parents watch with pride as youthful locks hit the ground, a symbol of growing up. For the O'Brien family, however, their grandson's first haircut had particular meaning.

"My 2-year-old grandson had his first haircut yesterday at Vinnie's Barber Shop in Amagansett. Not very interesting, I realize," said Tim O'Brien of East Hampton, but "here is the part I do think is interesting: I learned from Vinnie years ago that the wooden booster seat," used by children, "came from Pete Rana's barbershop, which preceded Vinnie's barbershop in Amagansett many years ago."

Here's the kicker: Mr. O'Brien's grandson, Weston O'Brien, is Pete Rana's great-great-grandson. "Weston's father and mother traveled from their home in Nassau County so Vinnie could provide his first haircut while he was seated in the booster seat from his great-great-grandfather!"

Joanne O'Brien, Weston's grandmother, is Pete Rana's granddaughter. "My grandfather, Pete Rana, was the barber in Amagansett for many years. Vinnie still has the bench that my grandfather used for the little boys getting their hair cut," Mrs. O'Brien said. "We were so grateful to Vinnie for doing such a wonderful job making Wes feel comfortable on his big day. It was so special for us that Wes got to sit on his great-grandfather's bench."

Pete Rana was born in an apartment above the barbershop. After serving in the Navy, he trained as a barber in New York City and worked next to his father in the Amagansett shop. He met his wife, Virginia Meyer, at the Marinello School of Beauty in Manhattan, and the couple moved into the apartment where he'd been born. Together, they founded the Charm Beauty Salon adjacent to the barbershop. Today, Vinnie Mazzeo upholds that legacy.

"I took the barbershop over in 1975, and the booster seat was there when I arrived," Mr. Mazzeo said. Vinnie remembers watching his own childhood barber, Marty Trunzo, cut hair. "Watching Marty in his barbershop made me think this isn't a bad profession. He's inside, he's talking to people, he's got A.C. in the summer and heat in the winter. I thought, you know what, maybe I'll give that barber thing a try."

And quite the successful try he gave: There was an hour's wait time at Vinnie's on Weston O'Brien's big day.

Mr. Mazzeo says kids have their own take on the wooden booster seat. "They say, 'Oh wow, that's really old!' or 'Do I have to sit on that?' " to which Vinnie responds, "Yes, you do!"

"You know, it is a little hard on their butts, but it works!"