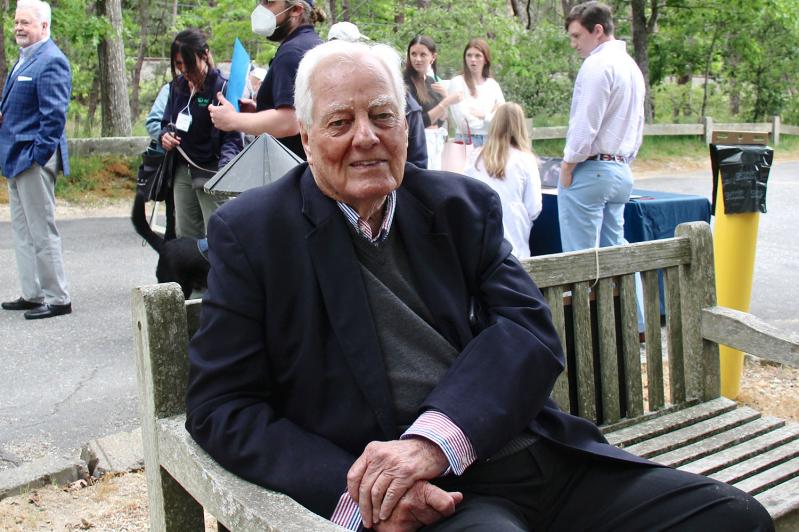 A generous gift from Richard Wells McCabe of East Hampton will allow for the transformation of the ARF campus with a new, energy-efficient, Forever Home with 40 kennels and an 8,400-square-foot indoor training arena.
Durell Godfrey Photos
By Bella Lewis

Fitting for the occasion, it was Smoochie the dog who officially broke ground Friday on the new home of the Animal Rescue Fund of the Hamptons. No shovel was needed — Smoochie was specially trained to dig the first hole herself.

Made possible largely by a generous gift from Richard Wells McCabe of East Hampton, the project will transform the ARF campus with a new, energy-efficient, Forever Home with 40 kennels and an 8,400-square-foot indoor training arena.

"I like to think that ARF was founded 50 years ago, and this is for the next 50," said Scott Howe, ARF's executive director.

In selecting the right paws for the groundbreaking job, he found "lots of our dogs dig, but not all of them would dig on command . . . in front of so many people. We used a lot of freeze-dried chicken treats and, in the end, Smoochie was the star." He said that she likes people more than treats, so they had to first let her mingle with the crowd.

"We wanted to celebrate a project we've been planning since 2012. The design and evolution and fund-raising all came together in the last couple of years," Mr. Howe said.

The new space — including the Richard Wells McCabe Welcome Center — will allow ARF's programs to fire on all cylinders. Sometimes it proved challenging to find training space in the winter, and even then, the spaces used were often not designed for dogs. Designed by the Bacon Group, ARF's Forever Home also entails (pun intended) a ground-up renovation of the existing kennels with new meet-and-greet rooms for adopters, outdoor exercise areas, space for its pet food pantry, and a retail and lobby area. There will also be an environmentally friendly cleaning and waste system.

ARF's ongoing renovation campaign has a goal of $32 million. Mr. Howe said the construction is estimated at $13 million, while the rest will go to operations, reserves, and endowments. Information on supporting the organization is online at arfhamptons.org.

"I put a lot of thought and effort into how ARF operates and how they treat animals," Mr. McCabe said in an email to The Star. "I feel a lot of emotion for how animals are cared for and treated, and I believe ARF has the same approach."