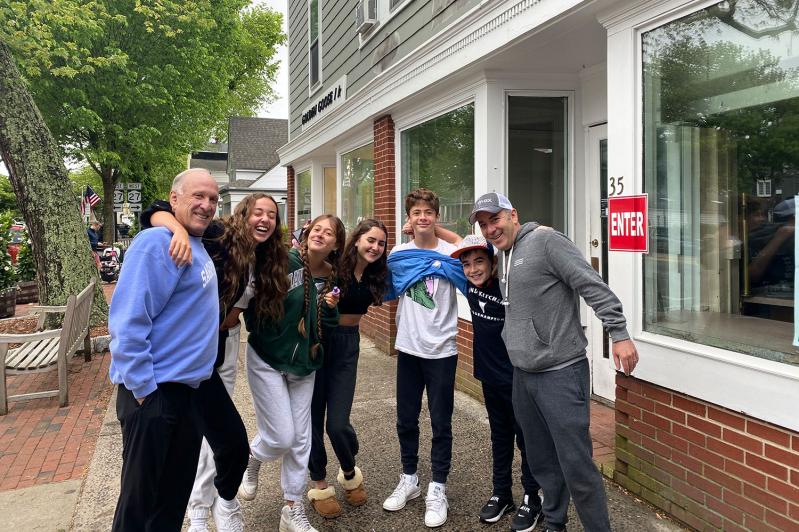 The Miller family, including, from left, Ken, Lindsay, Jolie, Chloe, Max, Benji, and Marc, reminisced about Scoop du Jour while standing in front of its former storefront on Newtown Lane on Monday.
Jamie Bufalino
By Jamie Bufalino

With the recent departure of Scoop du Jour, the East Hampton Village commercial district may be facing a summer without an ice cream shop for the first time in 26 years, and residents of all ages are dripping with dread.

In December, Lori Chavez, the owner of Scoop du Jour, announced that the shop was closing because of a drop in customer traffic during the pandemic. "We just couldn't do it with the Covid restrictions. We're a volume store," she said. "We need the volume, and we just didn't have it." Ms. Chavez, who also operates Big Olaf's ice cream shop on Long Wharf in Sag Harbor, cited the challenge of operating a business in East Hampton Village. "Rents are crazy, and expenses are high," she said.

A "for lease" sign was placed in the store's window the month it closed, and it has remained there ever since. The 910-square-foot space on Newtown Lane is owned by Donald Zucker, a real estate developer who also owns the building that contains the East Hampton movie theater.

"I'm surprised it closed down because there was always such a huge line," said Devon Blum, who was walking down Newtown Lane on Monday with her friend Avery Dimig. "I used to go there all the time," said Ms. Dimig. "It was always so good. You have to go to like Montauk to get ice cream now, or Buddhaberry in Sag Harbor, but that's not ice cream, it's just frozen yogurt."

"How do you feel about Scoop du Jour?" Linda Fisher asked her 6-year-old grandson Theo, who had been a daily customer. "Sad," he replied.

"I thought it was lie, I couldn't believe it," Jonathan Gold, a mint milkshake fan, said of the store's departure. When he would visit Jennifer Gold, his aunt, "I would go two to three times a week," he said. "Now I just go to the supermarket and get a pint."

The shop did have detractors. "I don't miss it in the summer because the lines were too long," said Kenny Gross, who prefers the ambience at Moo Moo's East Hampton Ice Cream Shop on North Main Street. "Scoop du Jour was always too much of a scene, Moo Moo's is a very nice place."

Mostly, though, it is sorely missed. Some long for the frozen treats. "I'm devastated without it because they had that phenomenal low-calorie yogurt," said Ms. Gold. Others wax nostalgic about the other goodies available on site. "I miss Dreesen's doughnuts, and I miss that it was a local store," said Sherri Donghia. And nearly everyone is in disbelief that there's no longer a full-fledged ice cream shop in the heart of the village.

"I think that an ice cream shop is essential for Newtown Lane, and I think it's heartbreaking that it's been forced to go," said Valerie Smith, the owner of the Monogram Shop a few doors down. Although Scoop du Jour brought a lot of potential customers into the village, "it's not even about whether it does or doesn't affect my business, I just think everybody is entitled to an ice cream cone."

Ms. Smith has been proactive about trying to find a replacement. "I've spoken to a number of different people who have expressed interest in trying to put something in there that will continue the ice cream and doughnut tradition, but so far nobody has been able to put it together," she said.

Alan Patricof, an investor and "a big hot fudge sundae person," said it's a big disappointment for kids, including his grandchildren, to not have an ice cream shop in the village, so he has contacted a few local store owners, and offered to round up investors. "They're frightened by the rent and the lack of available labor," he said.

Scoop du Jour had been "the centerpiece of nightlife" in the village, he said, and without it, foot traffic could plummet. "The village clearly needs a more vibrant activity level beyond Gucci and Loro Piana," he said. "If East Hampton becomes a town of luxury stores and art galleries, the activity level is going to go down."

Based on pure enthusiasm for Scoop du Jour, the Miller clan, including dad Marc Miller, his children, Chloe, Lindsay, Jolie, Max, and Benji, and grandad Ken may be the most likely people to bring an ice cream shop back to Newtown Lane. Marc was on the phone seeking to rent the space on Monday. As he was dialing, his children were reminiscing about the ice cream, the doughnuts, and even the shop's coin-operated arcade horse. "It's been our family's favorite since we were born," said Chloe.