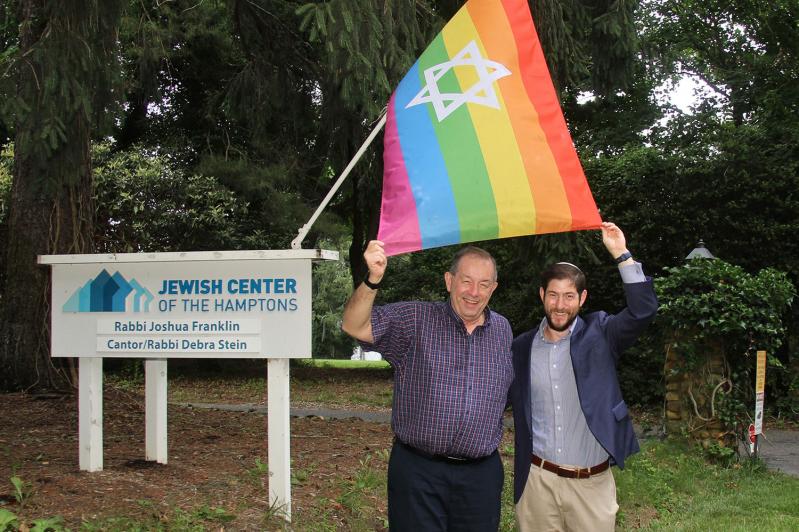 The Very Rev. Denis Brunelle of St. Luke's Episcopal Church, left, is teaming up with Rabbi Josh Franklin of the Jewish Center of the Hamptons, right, for a Pride-themed Shabbat service on Saturday.
Durell Godfrey
By Zoe Lubetkin

Pride Month, celebrated in June each year since 1970 in response to the Stonewall uprising in New York City in June of 1969, celebrates the L.G.B.T.Q.+ community and brings attention to its needs. On the South Fork, that attention might come through an interfaith service, a safe space for teens, or a health care center that prioritizes the needs of L.G.B.T.Q.+ people.

A rainbow flag flies in front of the Jewish Center of the Hamptons, which is holding a Pride Shabbat service on Saturday at 10 a.m. The Very Rev. Denis Brunelle of St. Luke's Episcopal Church will speak at the service. According to Rabbi Josh Franklin of the Jewish Center, Reverend Brunelle brings an interfaith aspect to the Pride celebration. Moreover, he said, hosting Mr. Brunelle, who is gay, allows the community to "honor him and his spiritual journey and the part of his identity that has so influenced his path."

Each year, the Jewish Center tries to bring speakers who may have different perspectives or backgrounds to address the community. Speakers at celebrations like the Pride Shabbat "elevate the conversation as to how we can . . . honor our members and understand their experiences," Rabbi Franklin said.

Rabbi Franklin and Mr. Brunelle often work together on interfaith programming; the two faith leaders are teaching a class called Big Questions this summer. This year, however, is Mr. Brunelle's last year serving the East Hampton community, and his upcoming retirement gives the interfaith Pride Shabbat even more significance. As well as a celebration, the event will ensure that "his story becomes a part of our collective narrative," Rabbi Franklin said.

It's important that L.G.B.T.Q.+ individuals feel a sense of belonging in the religious community, Rabbi Franklin said. "Being inclusive, it's a process . . . not just a word on our website."

National data emphasizes the need for inclusivity, especially among younger generations. According to Pew Research Center, acceptance of L.G.B.T.Q.+ individuals in the United States rose from 51 to 72 percent between 2002 and 2019. By contrast, however, a 2018 report from the Human Rights Campaign reported only 26 percent of L.G.B.T.Q.+ students feel safe in their schools, and only 5 percent said that their teachers and school staff are supportive.

This means many students do not feel accepted or comfortable coming out in their school settings, so access to outlets outside of school or home is crucial. A Sag Harbor L.G.B.T.Q. support group was dissolved during the pandemic due to social distancing, which made meeting in person impossible. Adrian Stivala, who led the youth group, explained that using Zoom to meet from home was "not just unappealing, but unviable." It presented challenges and induced anxiety, especially if youth were not out to their parents or did not have safe situations from which to join the meetings, he said.

Pre-pandemic, the group of about a dozen young people met at the Hamptons L.G.B.T.Q. Center at the Old Whalers Church in Sag Harbor. It functioned as a space to socialize, which can be a rarity. Post-pandemic, the future of the group is uncertain, although the need for these safe spaces is tangible, Mr. Stivala said. The positive response of the youth community when provided with supportive events and spaces is tangible, too. Mr. Stivala recalled a Drag Bingo Night the group put on in January 2020, which had an unexpectedly high turnout. "Word of mouth really did reach far," he said.

Mr. Stivala wants to reconvene the support group. Youth who are interested in taking part can contact him at [email protected].

The recent opening of the Edie Windsor Healthcare Center last month, named in honor of the late marriage equality activist Edith Windsor, supports another aspect of the L.G.B.T.Q.+ community on the East End -- their medical experiences. The center is Long Island's first comprehensive health center geared toward this population. Robert S. Chaloner, chief administrative officer at Stony Brook Southampton Hospital, said its goal is to be a "safe, accepting, secure environment."

The community reaction has been "very, very positive" to a center that is "very needed," according to Mr. Chaloner. He said the biggest challenge so far has been getting the word out.

Mr. Stivala also encountered this problem when promoting the youth support group, saying it is sometimes difficult to reach a community that can be hidden, not comfortable coming out, or wary of discussing personal details.

To gauge the needs of its clients, the Edie Windsor Healthcare Center created an anonymous survey about health needs. The survey can be accessed at stonybrookmedicine.edu/LGBTQ/survey.