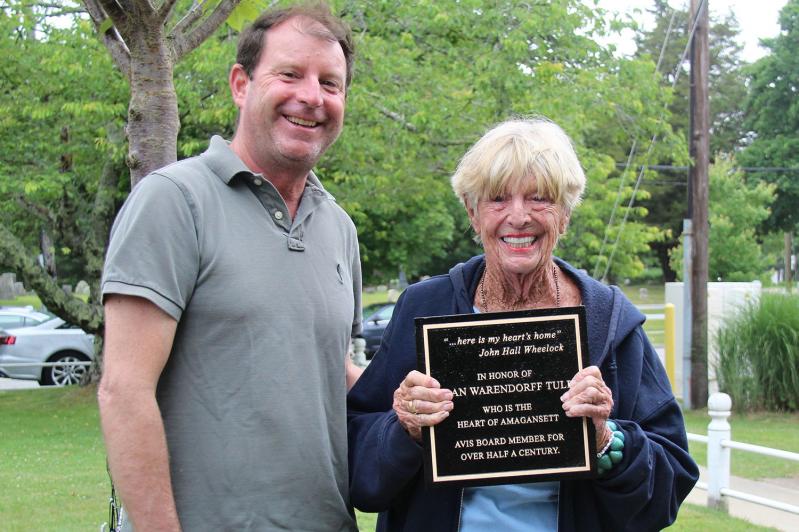 Joan Tulp, with her son Jamie Tulp, was honored by the Amagansett Village Improvement Society on Monday.
Durell Godfrey

The Amagansett Village Improvement Society honored Joan Tulp, a board member for decades and the hamlet's unofficial mayor, on Monday with the dedication of a tree and plaque at the society's tennis courts at the corner of Main Street and Atlantic Avenue.

The plaque, at the base of the cherry tree, features the words "Here is my heart's home" from "Noon: Amagansett Beach" by the poet John Hall Wheelock. "In honor of Joan Warendorff Tulp who is the heart of Amagansett, AVIS board member for over half a century," it continues.

The quote is appropriate, said Cathy Peacock of the society, "because she is the heart of this hamlet. She loves Amagansett, and she never wanted it to change. . . . She's been the guiding light and an activist ensuring that any changes were things that benefited the community, that were a positive force. She's also been the heart and driving force of AVIS for over half a century."

Ms. Peacock asked what the hamlet would be without Ms. Tulp's unstinting devotion to the society. "She's an inspiration to all of us, to remember we can't do it all, but whatever we can do, we should do. I don't think there's anyone in Amagansett, or even the whole environment, that isn't a friend of Joan's. She never has a cross word or says anything mean about anyone. . . . We love Joan, and we wish her well for another 50 years in AVIS."

The guest of honor was toasted with champagne and cookies. An emotional Ms. Tulp, her son Jamie Tulp at her side, thanked her colleagues in the society. The event came as a surprise, she said.

A native of Rockville Centre, she worked as a model in Paris, a secretary in Belgium, and a columnist and candidate in Brooklyn. As a member of the West Brooklyn Independent Democrats, she once sought the office of female district leader, an elected position charged with an assembly district's oversight of the county committee. Eleanor Roosevelt and Senator Herbert H. Lehman endorsed her candidacy in person.

Ms. Tulp arrived in the hamlet in 1950. "I got off the train and fell madly in love with Amagansett," she told The Star in 2019, on the occasion of her 90th birthday. She has been a year-round resident for around 27 years, and she has also been active in the Amagansett Citizens Advisory Committee, the East Hampton Food Pantry and East Hampton Healthcare Center, and the Ladies Village Improvement Society.