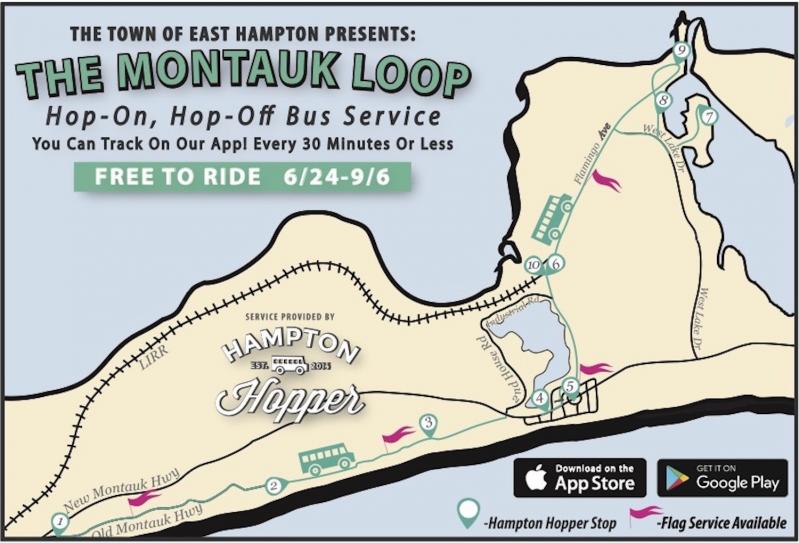 The Hampton Hopper is adding a new route linking East Hampton Village and Montauk, with a stop in Amagansett.
By Christopher Walsh

The Hampton Hopper, a seasonal bus service serving Montauk that was suspended during the pandemic last year, will resume service as soon as Thursday, with an expanded service territory.

The East Hampton Town Board voted last Thursday to approve use of up to $100,754 in budgeted and surplus money to pay for the service. It is to run from 10 a.m. to 10 p.m., seven days a week through Labor Day, Sept. 6. Service will begin no later than Saturday, according to a statement issued from Town Hall. A schedule will be posted on the town website, ehamptonny.gov.

Bus driver positions are available, and those interested have been asked to visit hamptonhopper.com for more information. Two buses will make regular stops at 12 Montauk locations from Hither Hills State Park to downtown, the Long Island Rail Road station, and the dock area.

The Hopper is adding a new route linking East Hampton Village and Montauk, with a stop in Amagansett, funded by Stony Brook Southampton Hospital and a suggested fare that was still to be determined as of Tuesday. That bus will operate Wednesday through Sunday from 11 a.m. to 6:55 p.m.

The Hopper debuted in 2018 and was deemed a success, with ridership increasing the following year. State grants that initially covered a large portion of the costs were not available this year. A limited service, underwritten by Stony Brook Medicine, had been planned for this summer until arrangements were made by the town for the full shuttle service.

"By offering this free shuttle, we advance our goals of reduced emissions, fewer vehicles on the roadways, and lesser demands for parking," Supervisor Peter Van Scoyoc said in a statement.