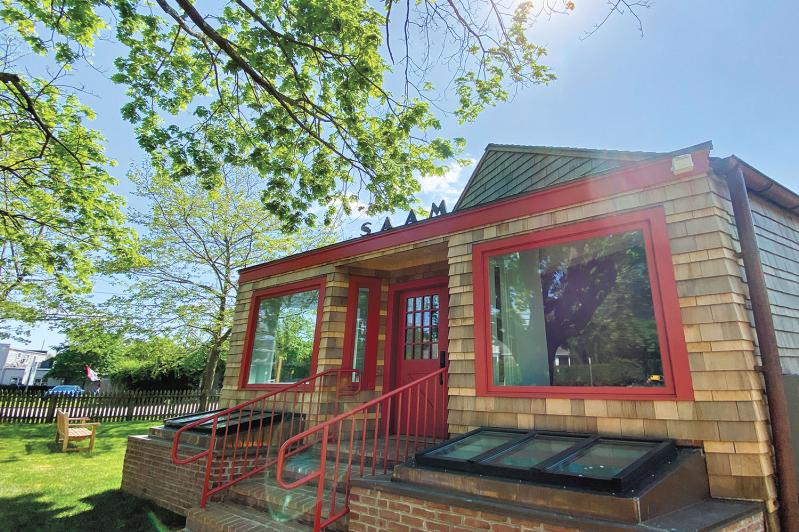 The Southampton African American Museum will have its grand opening on Saturday.
By Mark Segal

Seventeen years ago, Gloria Cannon had an idea, to preserve “The Barbershop,” a longtime Southampton gathering place for Black East Enders. On Saturday, Juneteenth, after years of planning, fund-raising, construction, and a few setbacks, her vision will be realized with the grand opening of the Southampton African American Museum at 245 North Sea Road, the site of the former barbershop built by Emanuel Seymore in the 1940s.

Saturday’s events will begin at 11 a.m. with half-hour timed guided tours of the building and its inaugural exhibitions, “Grooming a Generation: A History of Black Barbershops and Beauty Parlors” and “African American Art from the Private Collection of Peter Marino.” Pre-registration, at saamuseum.org, is required for the tours.

A performance by HALO, the first quartet of African-American singers to compete in major international barbershop competitions, will take place at 1 p.m. A panel discussion on the history of Black barbershops and beauty parlors will follow at 2:30. Barbecue from Heart and Soul catering and music by Certain Moves Trio, the museum’s house band, will round out the day’s events.

Panelists include the keynote speaker, Quincy Mills, associate professor of history at the University of Maryland, College Park; Georgette Grier-Key, executive director of the Eastville Community Historical Society in Sag Harbor, and the professors Jennifer Anderson and Mark Chambers. Brenda Simmons, the museum’s executive director and co-founder with Gloria and Bonnie Cannon, will moderate the discussion,

Gloria Cannon’s dream was to ensure that both Seymore’s legacy and that of “Fives,” a restaurant and juke joint built and owned by Arthur Robinson, be recognized. “Fives” was the other establishment where local residents who were part of the Great Migration found a safe haven.

The building was designed, restored, and renovated by the Southampton architect Siamak Samii. More information can be found on the museum's website.