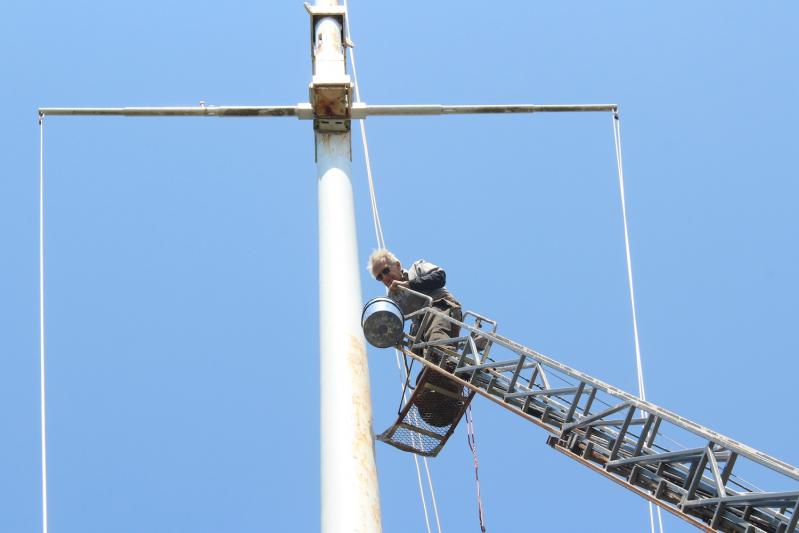 Steeplejack at work: Just in time for Memorial Day, the Amagansett flagpole got a cleaning and a fresh coat of white paint this week, with David Midgette, 81, handling the high-up task with surprising ease.
Durell Godfrey
By Irene Silverman

Long years ago, upon our coast a ship was wrecked
The mast was raised upon the village green
And from it waved a glorious flag
An eagle, spread, bedecked its top,
Against the sky a golden sheen. . . .

The poem "The Amagansett Flag" was read aloud to an appreciative crowd of some 200 residents of the community on May 30, 1950, at the dedication of a new and, so ran the lines, "stronger pole, being fashioned out of steel." The "wrecked ship" was the Bessie C. Beach, a three-masted schooner bound from St. John's, Newfoundland, to Philadelphia, which came ashore off Napeague in a fierce storm in December 1913.

The 32-year-old ship broke up, though her six-man crew, along with her topmast, was saved. A team led by Capt. Herbert N. Edwards of Amagansett salvaged the 45-foot wooden spar, which he then presented to the hamlet to become part of a flagpole. The Men's Brotherhood erected it in May 1914, in a prominent location on the village green between the firehouse and the railroad station.

This week, with Memorial Day fast upon us, what was known by 1950 as the "Liberty Pole" in honor of those who served in World War II is getting a cleaning and a fresh coat of white paint, courtesy of the Amagansett Village Improvement Society. The steeplejack doing the work, David Midgette of Medford, was planning to ascend the 120-foot pole in a crane on Tuesday, barring strong winds, with the assistance of his helper, Herb Peetz, who'd already cleaned the rust from the lower pole and painted it from the yardarm to the ground.

The golden eagle that "bedecked the top" of the original flagpole blew off in the 1938 Hurricane. Kenneth Wessberg, a future mayor of East Hampton Village, acquired it some 30 years later and displayed it at his hardware store — the Golden Eagle — for decades. (Many people assumed the store was named for the eagle, but not so: It got its name from a shade of Dutch Boy paint.)

Mayor Wessberg died long ago, but his son, also Ken Wessberg, has the eagle still, in his East Hampton garage. "It's huge," he said this week from Florida, where he's just bought a house. "It has a four-foot wingspan." It's about time the eagle went to a good home, he said, and he has promised to donate it to the Amagansett U.S. Life-Saving and Coast Guard Station Museum upon his return here. "It should go back to Amagansett," he said.

Over the decades, A.V.I.S., which is celebrating 100 years of service to the community this year, has replaced the National Bird several times, each time to little avail. Mr. Midgette, who took one eagle down with a broken wing, explained the problem: "You have to put the eagle higher than the pole, of course, [but] you get an updraft and [the eagle] catches on the pole."

High winds whip not only the flag and eagle but also the weathervane and halyards. "Flags are torn to shreds in from two to three months," A.V.I.S. lamented in its 1972 report to members. "Halyards must be replaced every two to three years. We are still seeking a positive means to secure the directional markers on which our eagle rotates."

In 1971, when a broken eagle was found to be too damaged for repair, it was replaced at a cost of $1,175. A new one today, according to the society, would run about $14,000, "not including mounting and securing." There has been no eagle atop the Liberty Pole for years, a situation that A.V.I.S., despite the costs, is determined to rectify, especially as it marks its centennial. In its most recent annual report, the society wrote that "we are researching across the United States to replace the eagle."

As for the Amagansett flagpole, its future, like its new coat of paint, looks bright. The family of Iantha McMahon, a legendary algebra teacher at both Pierson and East Hampton High Schools, who died in March -- a week before her 102nd birthday -- has just established in her memory a fund for maintaining the pole, which is within walking distance of the house where she lived on Old Montauk Highway and of the one around the corner on Atlantic Avenue where she was born. That same Captain Edwards who saved the topmast of the Bessie C. Beach was Iantha Edwards McMahon's uncle.