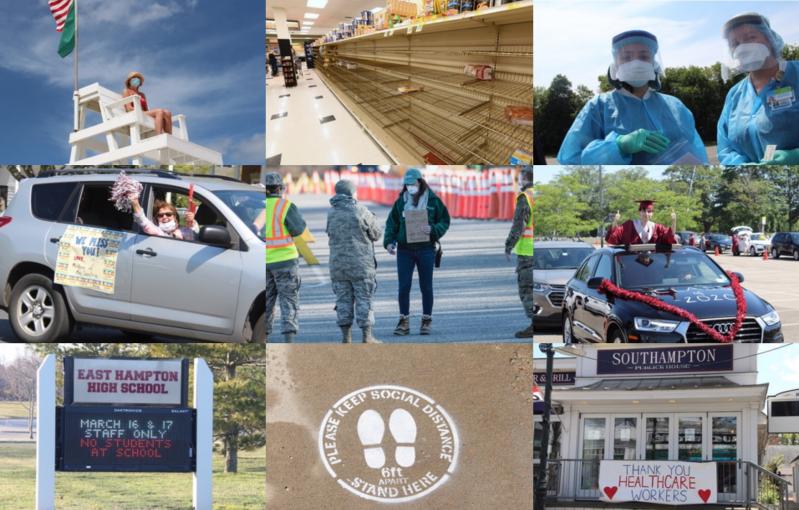 Scenes from the earlier days of the Covid-19 pandemic.
Durell Godfrey, Doug Kuntz, and Christine Sampson Photos
By Bella Lewis

Missing movie theaters, getting used to masks, a six-foot sixth sense, the words "these uncertain times" -- what sounds like the most basic Covid starter pack to us now will one day sound outrageous to others, a storytelling opportunity that the East Hampton Library tapped with its initiative the Pandemic Project.

The seed for the idea was planted when Dennis Fabiszak, the library director, noted that the library had "no public record of what was going on in the community in 1918 during the Spanish flu."

Considering the library's large Long Island Collection's local history archives, Steven Spataro, head of adult reference, and Andrew Visconti, a memoir-writing professor and liaison, developed Mr. Fabiszak's observation into a plan for an archive documenting the experience of East Hampton residents living life, or as much of it as possible, during Covid.

Mr. Spataro explained that in using a software called Memria, which virtually collects first-person accounts, participants go through a series of prompts to record audio or video of themselves answering questions that speak to just what "these uncertain times" look like. Those interested can also call the library and set up an in-person interview.

"One hundred years from now, someone can look back and say that was my great-grandfather or that was my mother and this was what she experienced in that time," said Mr. Visconti, whose memoir-writing classes at the library have been in high demand over the past three years.

His journalism background and memoir expertise allowed him to think about which questions would be most probing and yield the fullest answers. Mr. Visconti said it was a group effort among library staff to collect questions, but the problem was not coming up with them, it was whittling them down.

Mr. Spataro said that the Memria marketing team and creator Louis Bickford also observed in a Zoom meeting that, in their experience, too many questions can discourage people and answers can get lost in the shuffle.

So as not to overwhelm the interviewees, the options were shoehorned into five lines of inquiry that avoided redundancy and combined multiple questions where possible. Anyone who uses the Memria software will be guided through making an account and then prompted to answer the following five questions.

1) What is your name, age, and in which hamlet do you live?

2) How would you describe the experience of living through a pandemic?

4) What is the first thing you'd like to do when the pandemic is over?

5) Which activities kept you company during the many months of isolation?

In a test video, Mr. Visconti interviews Mr. Spataro in the library courtyard. His answers paint a familiar picture of quarantine. Through the eyes of a student, however, learning about Covid in a textbook, say, it is precisely those familiar details -- that he and his wife sometimes went for two walks in one day, that they finally got to organizing their record collection -- that may bring a hazy picture of the past into focus for future generations.

Mr. Spataro and Mr. Visconti said they would love to get at least 500 participants and perhaps even put together a video loop to show the community. Mr. Fabiszak hoped as many residents and employees of local businesses as possible would participate. An email campaign, press release, and Mr. Visconti conducting man-on-the-street interviews will get the ball rolling, they said.

The library is set to begin sharing the link to its Memria page today, beginning the process of collecting stories after running a few in-house tests. Not only technical tests, said Mr. Visconti, to make sure the formatting is easy to use, the buttons clear, but also to get a sense of "what kind of stories we will hear back; it would be wonderful if we could get answers that capture something special about the community."