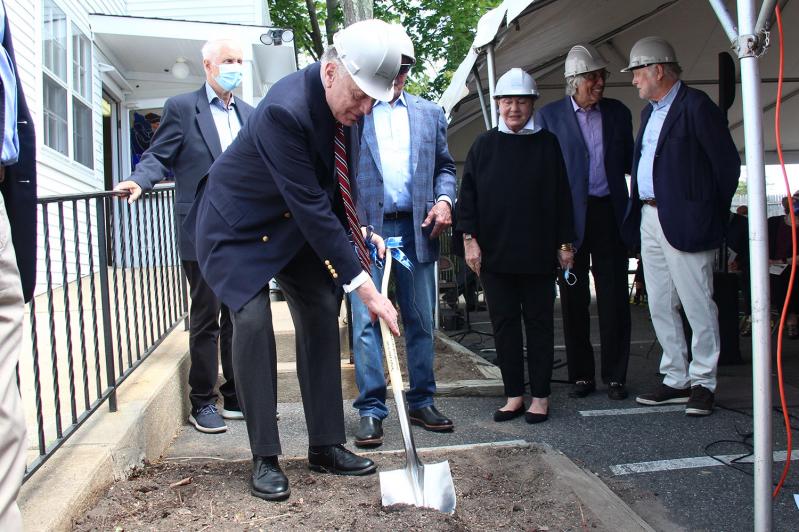 Ronald Lauder, a philanthropist and member of the family that established the Estee Lauder company, helped Temple Adas Israel break ground on renovations that will lead to new Hebrew school classrooms named in honor of Mr. Lauder and his wife, Jo Carole Lauder, pictured center.
Durell Godfrey
By Christine Sampson

A resounding "Mazel tov!" rang out at Temple Adas Israel on Sunday morning as members of the synagogue -- the oldest one on Long Island -- gathered to break ground on a $7 million renovation and expansion project, including the building of the Ronald and Jo Carole Lauder Center for Jewish Education.

Sunday was an especially important day for Jews, the holiday of Shavuot, which commemorates the giving and receiving of the Torah, and Rabbi Dan Geffen got tears in his eyes as he considered the importance of the celebration.

"The sages teach us . . . to know where you come from and where you are going," he said. "From past to present to future, may we only go from strength to strength."

The renovation will preserve the 123-year-old sanctuary while increasing seating in the community hall for High Holy Day services. Also on deck is the rebuilding of the lower-level classrooms and multipurpose areas, which will become brighter and more versatile; adding an elevator for handicapped access, and upgrading the temple's technology infrastructure and storage space. The construction is expected to take 10 to 12 months. The overall footprint of the property is not expanding, though the new elevator and entryway will take up some spaces in the current parking lot.

What became clear Sunday was that the planned renovation is one of those it-takes-a-village kinds of projects. There were words of thanks for the Lauder family and to Eileen Moskowitz, the temple administrator; to Leah Oppenheimer and Shelly Lichtenstein, the former and current Hebrew school directors, respectively; to Breanne Matloff, who managed the fund-raising; to the board administration and members, and to many others. Rabbi Geffen also thanked the Old Whalers Church and the Cormaria retreat center for hosting Temple Adas Israel's offices and events while the renovation is underway.

"A 'l'chaim,' if I had a glass, to each and every one of you," Rabbi Geffen toasted.

To Roger Matloff, a temple board member, Sunday's celebration was both literal and symbolic.

The Lauders, of the Estee Lauder cosmetics company fame, are philanthropists known throughout the world for supporting Jewish education and culture, for building schools and establishing scholarships. Locally, they were instrumental in bringing Rabbi Geffen to the Sag Harbor synagogue. Mr. Lauder, a former American ambassador to Austria and the current president of the World Jewish Congress, began his remarks with a moment of silence to acknowledge the recent surge of deadly violence in Israel and Gaza. In the distance, church bells could be heard ringing as the congregants observed silence.

Mr. Lauder said that "synagogues like this" are the future of Judaism.

Myra Peskowitz relayed a message sent from Israel by Rabbi Geffen's predecessor, Rabbi Leon Morris, on the renovation. "May it create an environment for more friendship, for more study, for more prayer. May it expand our connection to God, to Torah, and to one another," Ms. Peskowitz read.

Alan Leavitt, who is co-president of the temple's board of directors, said that when he looks at the building, "What I imagine are toddlers playing in a classroom; preschoolers learning Hanukkah songs; children shaping dough to make challah; grade school students learning to speak, read, and understand Hebrew; students preparing to read from the Torah at their bar mitzvahs, and our high school students preparing for a birthright trip to Israel."

Suffolk County Legislator Bridget Fleming offered a "whoop, whoop!" in gratitude for the Covid-19 vaccine, without which Sunday's in-person celebration might not have been possible. She also lauded the temple for its commitment to social justice. Sag Harbor Mayor Kathleen Mulcahy offered her congratulations and good luck as well.

For Jordana Sobey and Dr. Steven Sobey of Sag Harbor, whose two children will be in Hebrew school in person at the temple next year, the upcoming changes are welcome.

"I'm really excited about the renovations that the temple is taking on," Ms. Sobey said this week. "I look forward to their bar/bat mitzvahs in a few years in the new and improved space."

In keeping with the theme of education and celebration, Nathiel Egosi, who has been a member of Adas Israel since he was a young boy, offered a history of the synagogue. Before the turn of the 20th century, he said, its founders endeavored to create a place of worship for Jewish immigrants who'd arrived in Sag Harbor seeking work at the watchcase factory. Mr. Egosi, who owns the Sag Harbor Inn, explained that there have been several additions and renovations over time, but that each time the synagogue underwent a transformation, including in the late 1970s and mid-'80s, "it was because a small group of passionate and devoted members cared deeply about the temple's future and how best to serve its next generation."

Mr. Egosi's father, Charles Egosi, had been instrumental in seeing those renovations through, but Nathiel Egosi acknowledged Sunday that they will be replaced by the new construction. "The efforts that we have made to enrich our community and build a strong congregation will not be lost. In fact, this was the purpose of the building all along."