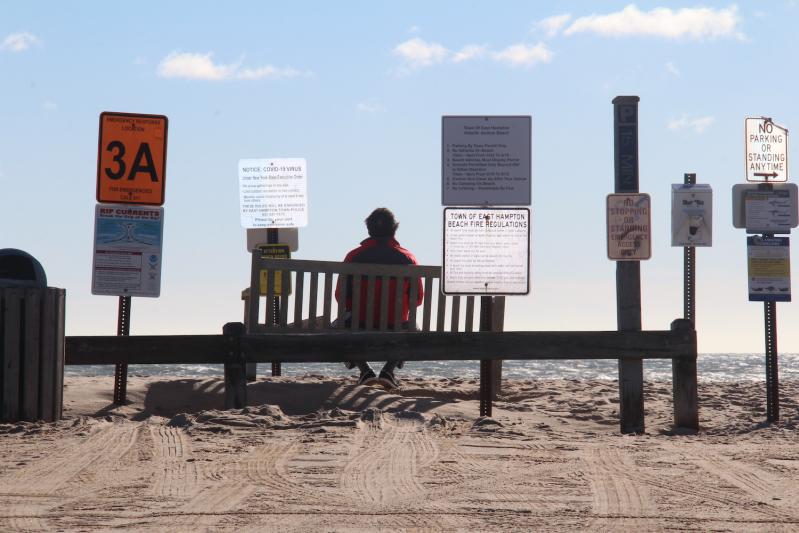 "If you're pulling up to have your lunch, those signs are right in front of you," said Michael Diesenhaus.
Durell Godfrey
By Irene Silverman

At Monday night's virtual meeting of the Amagansett Citizens Advisory Committee litter and signs were on the table, or, more precisely, on the hamlet's roadsides and beaches. Following a lengthy presentation by a Montauk woman whose company makes an app that points you to the nearest trash can, there was talk of the town's adopt-a-road program, which, said Supervisor Peter Van Scoyoc, lists all the roads currently adopted on the East Hampton Town website and is "incredibly easy" to join.

"It's ridiculous, the things people put in the road," the supervisor said. "TV sets, palettes, sofas — I'd love to catch them." The town has a single employee assigned to "all-day pickup," he said, "but it's an ongoing problem." He suggested that members of the committee organize a roadside cleanup, preferably before Memorial Day.

Dana LaCarrubba, whose family has lived in Amagansett since the 1920s, blamed the profusion of "No" signs at Indian Wells Beach for an increase in littering there. The town should "rip out" the signs, she said. "If it looks nicer, people might treat it nicer."

Michael Diesenhaus agreed. "If you're pulling up to have your lunch, those signs are right in front of you," he said.

Mr. Van Scoyoc defended the signs as necessary, "but lo and behold," he added, "they get vandalized. People don't always behave well. If you have a better solution, I am very happy to engage with you and get that done."

Jaine Mehring, who was attending her first advisory committee meeting, spoke up about her Beach Hampton neighborhood and about the ever-increasing number of home sales there and elsewhere in town — 23, she said, in the Amagansett Lanes alone between Jan. 19 and March 21, based on newspaper reports. "I think we need to start advocating," said Ms. Mehring, a financial consultant who has lived here full time since February 2020. "How many times do you walk by a house and think, wait, how did that get built?"

"Houses at three, four, five, six, seven thousand square feet are inconsistent with the character of many of our Amagansett neighborhoods," she continued, "like the Lanes, like Lazy Point. Maybe we haven't been as strong as a neighborhood as we could have."

Mr. Van Scoyoc concurred, to a point. "We see it in the incredible increase in [community preservation fund] money," he said. "Seventy million! At the same time, properties [for town acquisition] have become so expensive."

In other news of the hamlet, the reconstruction of the municipal parking lot behind Main Street has been completed in time for the summer season. There are some 185 spaces total, 109 of them marked by white lines and limited to two-hour parking; 45 marked by yellow lines and good for 24 hours; 13 within green lines and limited to 30 minutes, and 11 within red lines where cars can park for up to 72 hours. The remainder are blue handicapped spots, good for two hours wherever they may be, including one within the three-day zone.

Also, taxicabs and vehicles for hire — Uber and Lyft, for example — may no longer park in the lot except when dropping off or picking up fares, and trailers cannot be parked there overnight. "Way to go!"  Michael Cinque, whose business, Amagansett Wines and Liquors, backs up to the lot, told Mr. Van Scoyoc as the meeting ended.