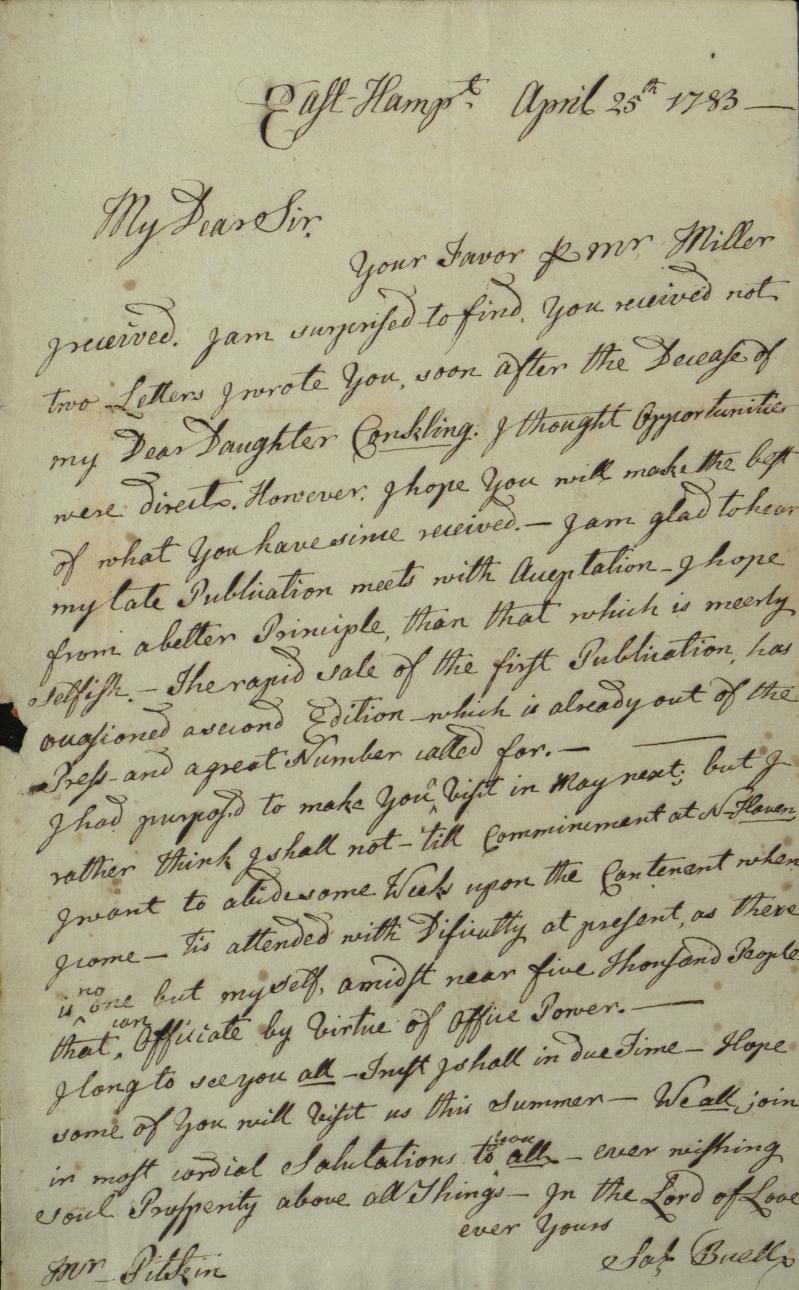 Two hundred and thirty-eight years ago, on April 25, 1783, the Rev. Samuel Buell (1716-1798) wrote to his friend Elisha Pitkin of Hartford, Conn., reflecting on mail and travel difficulties. He also discussed the popular public demand for his own most recent publication, which was actually a funeral sermon he preached for his daughter Jerusha Buell Gardiner Conkling (1749-1782) at the Church of Christ in East Hampton (the present-day Presbyterian Church), where he was pastor.

In his letter, Buell glosses over this loss, perhaps because he addressed it elsewhere.

Two of Buell's letters to Pitkin apparently were lost, as Buell writes, "I am surprised to find you received not two letters I wrote you soon after the Decease of my Dear Daughter Conkling. I thought opportunities were direct. However, I hope you will make the best of what you have since received."

Buell was pleased to hear that his sermon prompted contemplation from his friend, but he hoped his friend's focus was not "merely selfish."

It's hard to imagine such demand for a funeral sermon today, but Buell's publication included letters from Jerusha along with an account of her life. The letters Buell selected reveal that Jerusha spent time in Connecticut, probably as a "refugee" from occupied Long Island during her widowhood.

Buell tells Pitkin his plans have changed, and he won't be visiting his friend "May next," explaining that he's the only clergyman left and "at present there is no one but myself amidst some five thousand that can officiate by virtue of Office Power."

It's worth noting that churches were targeted during the British occupation of Long Island, and an 1809 biography of Buell claims that he was the only clergyman within 40 miles during the Revolution.

Buell writes that he will wait to visit Pitkin until commencement at "N. Haven," presumably a reference to New Haven's Yale University, where Buell attended divinity school. It's not clear if Buell ever did "abide some weeks upon the Cont[i]nent," as he humorously wrote Pitkin, but this letter reveals just how much the reverend was able to "make the best of" the sorrows of his life.