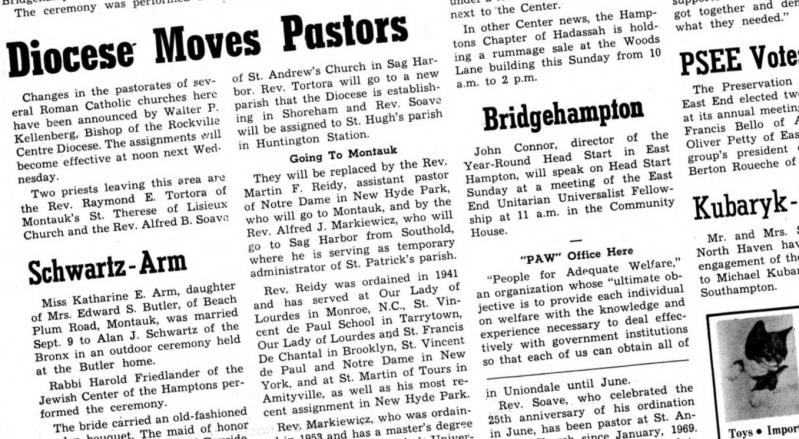 An article in the Sept. 20, 1973, issue of The East Hampton Star announced the reassignment of the Rev. Alfred B. Soave from St. Andrew in Sag Harbor to St. Hugh's parish in Huntington Station. Mr. Soave, who died 1999, is the subject of 14 Child Victim Act lawsuits.
The East Hampton Star
By Carissa Katz

The Roman Catholic Diocese of Rockville Centre, which oversees parishes across Long Island, has released a list of over 100 clergy accused of sexual abuse while serving in the diocese, including some who had not previously been identified. Eleven of the clergy on the list served on the South Fork from the late 1950s through as recently as 2000.

The list, which is included in the diocese's bankruptcy court filings, names priests who served at Most Holy Trinity in East Hampton, St. Andrew in Sag Harbor, St. Therese of Lisieux in Montauk, Sacred Hearts of Jesus and Mary in Southampton, Queen of the Most Holy Rosary in Bridgehampton, and the Villa Maria convent in Water Mill.

All 101 of those named are men against whom a diocesan review board has determined that the allegations of abuse were credible, those "against whom an allegation of abuse was made" through an Independent Reconciliation and Compensation Program, or those on whose behalf the diocese "made a payment in settlement of such allegation," according to the filing. The Diocese of Rockville Center established the Independent Reconciliation and Compensation Program in 2017 to, in its words, "provide a confidential mechanism for survivors to be heard" and "to receive compensation and some measure of healing and justice."

"This list is not exhaustive," according to the filing. Many of the names on it were already known. Some of the former priests have been convicted, served prison time, and are living as registered sex offenders. But in cases where a settlement was reached and criminal charges were not filed, the names may not have been made public prior to the April 15 filing.

"The diocese had never put out its own list about who credible claims were on and who they had paid out settlements on," said Patrick Stoneking, an attorney in the Manhattan office of Jeff Anderson and Associates, which is representing some 100 people with claims against the diocese. "When they settled, the names disappeared." This list changes that, although it still may not be complete, Mr. Stoneking said.

Being included on the list in the bankruptcy filing "is a tremendous admission by the diocese that that person did something terrible," Mr. Stoneking said. "It's a very strong admission, and that's never happened before in the diocese. . . . It's saying more than they've said before."

The document names the credibly accused priests and lists the locations and dates of their assignments and the locations where the abuses were alleged to have occurred.

The diocese "has not previously published a list because of ongoing investigations, privacy issues, as well as potential legal considerations," Sean P. Dolan, its director of communications, said in a written statement. Further, he said, "The inclusion of any name does not represent an admission of guilt on the part of the accused. We continue to pray that the entirety of our efforts throughout the I.R.C.P. and Chapter 11 processes will offer some measure of healing and reconcilia-tion to the survivors of clergy sexual abuse."

The Star reported in 2019 that Sag Harbor's St. Andrew parish was one of some 170 around the state named in a widespread sex abuse complaint brought by people who alleged they were abused by clergy as children. According to that complaint, William Burke and Alfred Soave, both of whom had served at the parish, "used their positions as priests to groom and to sexually abuse" one plaintiff when he was between the ages of 8 and 14. Mr. Soave was at St. Andrew from January 1969 to September 1973, according to the bankruptcy filing. Mr. Burke served at St. Andrew from June 1974 to January 1975. Mr. Soave, who died in 1999, is the subject of 14 Child Victim Act lawsuits. Mr. Burke, who died in 1995, is the subject of six.

Mr. Soave is alleged to have abused children in the 1970s at St. Andrew and at parishes he served in before and immediately after his time in Sag Harbor. His accusers said he abused them at church, on retreats and field trips, at a North Haven beach, on a trip to Shelter Island, at a parish high school, and at his house. His postings in the diocese date from St. Dominic in Oyster Bay in 1948 to at least the late 1980s, when the diocese listed him as rector of St. Pius X Preparatory Seminary. He also served at that time as pastor emeritus at St. Hugh of Lincoln in Huntington Station and on the diocese's priests personnel board.

Mr. Burke's posting with the diocese began at Queen of Peace in Kew Gardens in 1946 and also continued through the late 1980s. In addition to alleged incidents while at St. Andrew, he is said to have abused children at St. Lawrence the Martyr Church in Sayville in the early 1970s, at his house in Hampton Bays, in his car, and on beach trips. He served at St. Lawrence immediately before being posted to Sag Harbor, according to the bankruptcy filing.

Father Peter Allen, a well-liked priest who was at Most Holy Trinity in East Hampton from September 1979 to June 1987, was accused of abuse at Sacred Heart Church in Cutchogue, where he was posted from 1990 to 2006. His time with the diocese began in 1971 at St. Lawrence in Sayville. After learning of the allegation, the diocese put him on administrative leave in December 2006, according to BishopAccountability.org.

When Father Allen left Most Holy Trinity, the Rev. James C. Miller stepped in as associate pastor in July 1987 to temporarily take his place. The year before, he had been a chaplain and counselor at St. John the Baptist High School in West Islip, one of three locations where he is alleged to have sexually abused children. He served in six other apparently short-term posts in the diocese between 1990 and 1997, according to the bankruptcy filings, before returning to the South Fork to serve as a temporary administrator at St. Therese in Montauk from October 1998 through October 2000.

A month after Reverend Miller left Most Holy Trinity, in September 1987, the Rev. James J. Bergin arrived to take on the role of associate pastor at Most Holy Trinity. He is alleged to have abused at least two boys at St. John the Evangelist in Riverhead, where he served for seven years immediately before his time in East Hampton, and at St. Pius X Preparatory Seminary in Uniondale and St. Francis de Sales in Patchogue.

According to a database compiled by Jeff Anderson and Associates with information from the Official Catholic Directory, BishopAccountability.org, and the public record, "both allegations were reported to diocesan officials in approximately the early 1980s." Mr. Bergin admitted to abusing one of the boys "and subsequently turned himself in to the diocese for treatment." The diocese settled one of the abuse claims.

Mr. Bergin was assigned to East Hampton well after the diocese was made aware of the claims against him, which date at least to the early 1980s, with victims reporting abuse not only at St. John the Evangelist and St. Pius, but also at Cedar Point County Park in East Hampton, on skiing and camping trips, and in three other parishes, among other locations, according to the filing.

His postings with the diocese spanned from 1961, when he was chaplain at Camp Molloy in Mattituck, until his time at Most Holy Trinity. He was there at least through 1991, and it was his final assignment with the diocese, according to the bankruptcy filing.

Aside from Mr. Soave, Mr. Burke, and Mr. Bergin, the only other priest on the list whose victims claimed abuse here on the South Fork is Daniel Babis. He was a chaplain at the Villa Maria convent in Water Mill beginning in 1956, and that is one of several locations in the diocese where he was accused of committing abuse. He was also said to have abused youth on beach trips, at private homes, at motels, and at a church in Lynbrook where he served for 10 years from shortly after his time at Villa Maria until 1970. Eventually, he relocated to Florida. He died in 1978.

Immediately before serving as a temporary administrator at St. Therese of Lisieux in Montauk in 1997 and again in 1998, William Singleton was accused of abuse at St. Raymond in East Rockaway, where he was pastor for a period of time starting in 1977 and pastor emeritus beginning in 1995. Temporary posts in Dix Hills, Lynbrook, and Wantagh followed, carrying him through the early 2000s, according to the list in the bankruptcy filing.

After alleged abuse at St. Pius X Preparatory Seminary in Uniondale, where he served on the faculty beginning in 1960, William J. Remey was posted to Sacred Hearts of Jesus and Mary in Southampton, where he served from 1975 to 1980.

Father Andrew L. Millar, who was at Sacred Hearts of Jesus and Mary in Southampton from June 1969 to October 1970 and at Queen of the Most Holy Rosary in Bridgehampton for a single month in 1994, was accused of abusing children at Our Lady of Grace Church in West Babylon, where he served for seven years immediately after his time in Southampton, at a cathedral in Rockville Centre, and at beaches, a private house, and a public library, among other locations. He "was allowed to retire in 1999, but continued to conduct masses at Saints Peter and Paul in Manorville," where parishioners were not informed about the complaints against him, according to BishopAccountability.org. In 2000, he pleaded guilty to sexually abusing a 15-year-old boy, served time at the Arthur Kill Correctional Facility on Staten Island, and is now a Level 3 registered sex offender.

Father Edward J. Byrne, who was with the diocese from 1938 until at least the late 1970s, was at Sacred Hearts in Southampton only from June 1959 through February 1960. He was accused of abuse in his next posting, at St. Barnabas the Apostle in Bellmore.

Father Donald Shane was in residence at St. Andrew in Sag Harbor beginning in June 1985, just a few months after an 11-year posting at St. Kilian in Farmingdale, where he was said to have committed abuse. His time with the diocese began in 1954 at Mary Immaculate in Bellport and continued through the early 2000s, when he was temporary administrator at Our Lady of Fatima in Manorhaven.

The Child Victims Act went into effect in August 2019; the window to file such claims will close on Aug. 14. The bankruptcy court has set the same deadline for people to file claims against the Diocese of Rockville Centre as part of its bankruptcy proceedings.

The diocese said it is "working in conjunction with its creditors' committee on a robust media campaign to alert sexual abuse survivors of the deadline for filing all claims, known as the bar date."