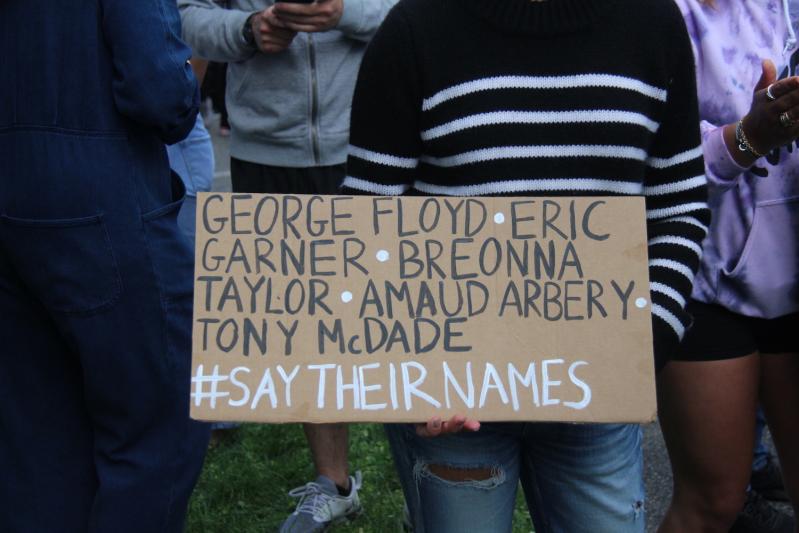 A sign held by a protester at a rally on the South Fork last summer. The death of George Floyd in Minneapolis last year brought protesters to the streets here and across the country to support the Black Lives Matter movement and decry the killing of other Black men and women by police officers.
Durell Godfrey
By Christine Sampson

A guilty verdict read in a courtroom halfway across the country on Tuesday night was heard loud and clear here on the East End and across the nation.

The verdict signaled "justice served" to many people here, including Willie Jenkins, a Bridgehampton native who was an organizer of Black Lives Matter demonstrations on the South Fork last year. He said he had been afraid to watch the trial on the news because he was "scared America was gonna make the wrong decision," he wrote on Facebook.

"I am excited and hopeful," Mr. Jenkins told The Star yesterday. "It's restoring my faith in our justice system and our great country that we are headed in the right direction for equality for all."

NPR has called Mr. Chauvin's trial "one of the most closely watched cases in recent memory." Sentencing will not be for another eight weeks. NPR said Mr. Chauvin likely faces 12 and a half years in prison but could be sentenced to as many as 40 years if Judge Peter Cahill "determines there were aggravating factors."

During a nonviolent incident in which Mr. Floyd was accused of trying to buy cigarettes with a fake $20 bill, Mr. Chauvin had held his knee down on Mr. Floyd's neck for longer than eight minutes, depriving Mr. Floyd of oxygen and causing arrhythmia and a brain injury. Protests in the wake of Mr. Floyd's death ranged from peaceful to riotous and were far reaching. On June 2, 2020, hundreds and hundreds of people attended a rally that shut down Main Street in Bridgehampton, many of them lying in the street to mimic the incident in Minneapolis. "No justice, no peace, no racist police," the crowd shouted. "Say his name: George Floyd."

Bonnie Michelle Cannon, the executive director of the Bridgehampton Child Care and Recreational Center, which has organized lectures and other events that address racism and promote cultural understanding, had two words yesterday: relief and hope.

"Things are going to change," she said. "We still have issues but . . . the Band-Aid has definitely been ripped off. Now we have people talking about police reform. We have people talking about the injustices faced by people of color and the stigma of racism that has been going on for many, many years. In every aspect, it's shining a light on what has been pushed under a rug. We have to face it. That's a good thing, but we have a lot of work to do."

"For too long we have let police go unchecked and unquestioned. They are public servants and transparency is imperative," said Ms. Votino, who is white. "I find solace in seeing my Black friends and family who feel some justice with this verdict, but it shouldn't have taken the entire world protesting George Floyd's death for this day to happen. We have a lot of work, and wins like this help us continue the fight."

Not everyone, however, interpreted the guilty verdict as a straightforward victory. It "was not necessarily justice, but accountability," said the Rev. Tisha Dixon Williams of the First Baptist Church in Bridgehampton. "George Floyd would be alive if it were justice."

America went to bed Tuesday night feeling as if there had been a step forward, Ms. Williams said, but woke up to the shooting death of a Black teenage girl in Columbus, Ohio. CNN reported yesterday that the girl allegedly had a knife and the police officer who fired the gun said he was protecting another young woman at the scene. Details are still emerging, but some are questioning whether the use of a gun -- rather than a taser or other less violent method of de-escalation -- was appropriate.

"We were just hit with another trauma, and this has been the vicious cycle for the whole year. As soon as we begin the healing process, we are hit with a new trauma," Ms. Williams said. "While I am relieved and happy for the Floyd family, it just proves how much is ahead of us."

Still, she said she finds herself more hopeful. "When the verdict was rendered, I paused to breathe all the breath George Floyd couldn't. You don't even realize how much you were holding your breath with something like that, and we as a community were waiting to exhale."

On Facebook, Melissa Berman, a founder of the nonprofit group East End Cares, said she hopes our society is on its way to the day when her neighbors in communities of color feel safe.

"I hope today’s actions of serving up accountability give some small bit of comfort to the family of George Floyd," Ms. Berman said. "I hope we are finally moving forward, if only by one step, toward realizing the promise of true equality."

Mr. Jenkins said details on a local rally marking justice for Mr. Floyd will be forthcoming.

Local police department officials, many of whom condemned the actions of Mr. Chauvin last year, did not immediately respond to requests for comment yesterday.

The East Hampton Town Anti-Bias Task Force issued a statement yesterday that said it "believes that the Derek Chauvin verdict is a moment in time for all of us to affirm a commitment to equal treatment for all and to reflect on our differences and embrace all dimensions of our diversity. We encourage our community to foster a positive climate of inclusion and to speak out against injustice."

In a statement, Suffolk County Executive Steve Bellone described Tuesday's verdict as "an important milestone" and pledged to keep working toward positive change for communities of color.

"While justice for George Floyd will never fully be achieved, the jury today gave us hope that a more just world is possible," he said. "We must use this opportunity to redouble our efforts to fight for racial equality."