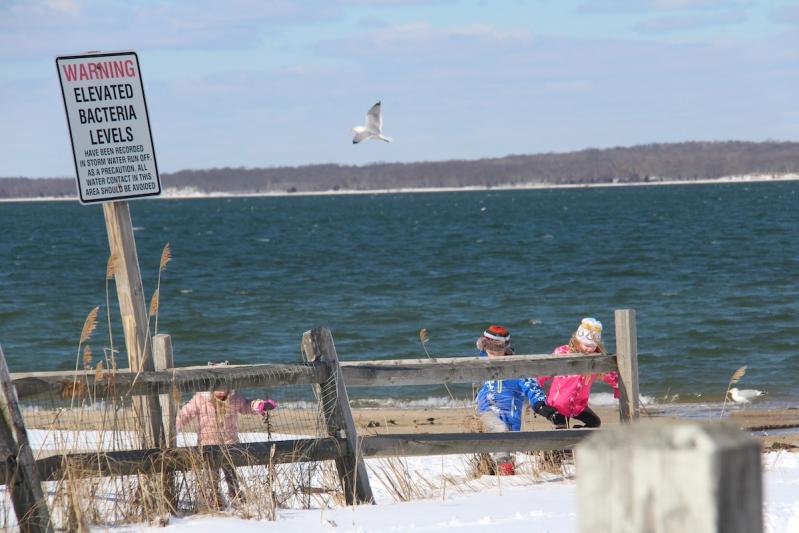 Children can often be seen playing near the drain at Havens Beach.
Durell Godfrey
By Jamie Bufalino

A yearlong study of Sag Harbor Bay, conducted by Dr. Christopher Gobler, professor of coastal ecology and conservation at Stony Brook University, has found its water quality to be good over all, but also has detected high nitrogen or bacteria levels at several trouble spots. Havens Beach was one. At times, the level of fecal coliform bacteria in the water there, emanating from a drainage ditch, was 100 times higher than the state's standard for safe shellfishing, and the level of enterococcus bacteria was 10 times higher than the standard for safe swimming.

In a presentation to the village board on March 18, Dr. Gobler said water sampling devices had been installed at nine locations: the Havens Beach drainage ditch, on a buoy 500 feet off Havens Beach, at the outfall of the village's sewage treatment plan on Bay Street, at the Breakwater and Sag Harbor Yacht Clubs (just east and west of the sewage treatment plant, respectively); in a boat-mooring field in the harbor, at the Ship Ashore marina near Sag Harbor Cove, in Little Northwest Creek, and at the point at which the creek flows into the bay. Fewer tests were done at the latter two sites, which were added in the fall, toward the end of the study.

Rust tide algal blooms caused by high nitrogen levels were detected on "multiple occasions" at the Havens Beach buoy, the outfall, the Breakwater Yacht Club, and the Ship Ashore marina, Dr. Gobler said. Low dissolved oxygen levels, another sign of excessive algae growth, were found at the Havens Beach drain, in Little Northwest Creek, and, to a lesser extent, at the Ship Ashore marina, but not at the other testing sites.

Stormwater runoff that contains wastewater from septic systems continues to be the primary source of nitrogen in the bay, said Dr. Gobler. "The way the village is set up, everything slopes down" to the bay, he said. "You get a mix of runoff down Main Street, from the east and west."

Fecal bacteria were also detected in Little Northwest Creek and the creek's outlet to the bay, but unlike Havens Beach, the State Department of Environmental Conservation has, "thankfully," declared it off limits for shellfishing.

Dr. Gobler used DNA testing to identify the source of the fecal bacteria, and found that animals, birds, and human waste were primarily culpable in the inner harbor, whereas dogs, other small mammals, and birds contributed to the elevated levels at Havens Beach and Little Northwest Creek.

The bacteria were not detected at the buoy 500 feet offshore, "but [I'm] not sure about people swimming closer than that," he said.

The contamination of the water at Havens Beach has been a concern for decades. In 2013, the village installed a filtration system within the drainage ditch to mitigate the amount of human and animal waste that flows to the site, particularly after a heavy rainfall.

John Parker, a member of the village's harbor committee, asked Dr. Gobler if the ongoing presence of the bacteria coming out of the drain indicates that the "smart sponges" in the filtration system are not working. "I'm not saying they're ineffective," Dr. Gobler replied. "It's quite possible it would have been much worse if they hadn't been installed."

Still, something has to be done to improve the water there, he said. The Havens Beach drain is "a source of bacteria that goes right out onto a bathing beach, that is a hazard that must be mitigated . . . I've seen pictures and heard stories of children actually playing in that outfall, that's something you don't want."

Petition to Speed Up Sand Replenishment in Montauk
Artistic Portraits of M.L.K. Up for Auction on Saturday
Wine Tasting for Lions Club
END_OF_DOCUMENT_TOKEN_TO_BE_REPLACED