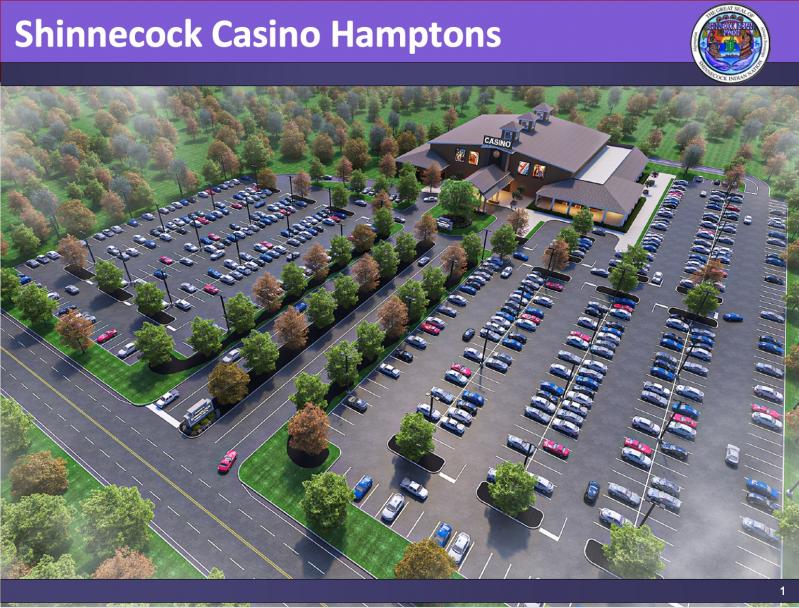 The Hamptons Neighborhood Group's goal seems simple: amicably help the Shinnecock Indian Nation find a different location for its casino, one the group deems "more suitable" than the tribe's territory on Montauk Highway. But it's fair to say the surrounding issues are more complex, when set against a backdrop of centuries of persecution of Indigenous people.

The Shinnecocks say they have tried for the past 20 years to find a place for a casino other than that property, only to be rebuffed by government officials and community members who have opposed it virtually everywhere else.

"If the casino is very successful, then there will be a very significant traffic issue" that will "also impact people in East Hampton, Bridgehampton," and other nearby places, said Jim Wacht, a real estate developer and attorney who organized a Zoom meeting of the group held on Tuesday. "Noise and light — we'll have noise and light pollution potentially, and the potential of crime."

A few suggestions for alternate sites emerged from the meeting, such as Gabreski Airport in Westhampton or the former Grumman industrial site in Calverton. By the end, the group decided to consult lawyers and lobbyists, and to consider paying for a traffic study.

So far, the Hamptons Neighborhood Group has amassed more than 200 members in the three weeks since it was started. On its website, it says its goal is "keeping the Hamptons the Hamptons."

"There is absolutely strength in numbers," Mr. Wacht said. "The more people we get . . . the more numbers we have, the more powerful we become."

He urged people to call and write their elected officials on all levels, from local to state to federal. The discussion will continue tomorrow during a Zoom call at 1 p.m. with State Assemblyman Fred W. Thiele Jr. and Southampton Town Supervisor Jay Schneiderman, both of whom  have opposed the casino from the start.

The Shinnecocks' plan is for a 76,000-square-foot Class II gaming facility, mostly consisting of bingo, video-lottery games, and Texas Hold 'Em table games. Dining establishments and "appropriate, right-sized" entertainment venues are also included. Class II casinos can serve alcohol, according to the New York State Gaming Commission, but are limited in the types of games that can be offered.

"The fact of the matter is that 76,000 [square feet] isn't huge. It's a very modest-sized casino," Mr. Wacht said Tuesday. "But that's only the first stage. . . . They'd love to turn this from a Class II to a Class III casino. Class III is primarily what you would see in Las Vegas. . . . Once they get their foot in the door, then it leads to probably even bigger plans."

The Shinnecock Tribal Council acknowledged on Feb. 17 that building a hotel is also on the horizon, but said the tribe was not planning to expand this particular casino into a Class III facility.

Doubting whether the casino as proposed would even be successful, Mr. Wacht said the only thing worse than a casino was a bankrupt one.

But Don Middleberg, who told the Zoom meeting that he'd been involved with the operation of the Foxwoods casino in Connecticut for five years, predicted that Shinnecock Casino Hamptons, as it is to be called, would undoubtedly succeed.

"I know a little bit about the way the Indian tribes think and what they're interested in," Mr. Middleberg said. "Start thinking about a lobbyist and legal counsel." If the group wants to prevent a casino in the Southampton area, he said, "we're not going to do it as a nice group of people. We're all well-intentioned, but we're going to need some professional support. We need the politicians behind us -- we need lobbyists behind us."

Reached by phone Tuesday evening, Bryan Polite, chairman of the tribal council, did not dismiss the Hamptons Neighborhood Group's stance as hostile. He agreed that the tribe would have liked to find an alternate site, but was left with no choice but to proceed on its own land.

"As long as their resources are being put into a positive direction, and not trying to thwart the Shinnecock Indian Nation's economic well-being, we're all supportive," he said. If the group "tries to stop our economic development, that's when Shinnecock will have an issue."

Mr. Polite said he had spoken with Mr. Wacht on the phone earlier in the day.

"He expressed his desire to see the casino somewhere else, and talked about how Shinnecock got a raw deal," he said. "We emphasized that we've been down this path before. It's not going to deter us from moving our process forward until there are more concrete conversations with the State of New York that isn't just lip service."

From among its participants on Tuesday, the Hamptons Neighborhood Group sought volunteers to reach out for input from attorneys and lobbyists, Stony Brook Southampton Hospital, and local golf clubs.

"Regardless of what happens here, we need to have an open relationship with our next-door neighbors," Mr. Wacht said. "It's unfortunate that we never really did have a relationship with them, and that's the way things are, but we can change that going forward."