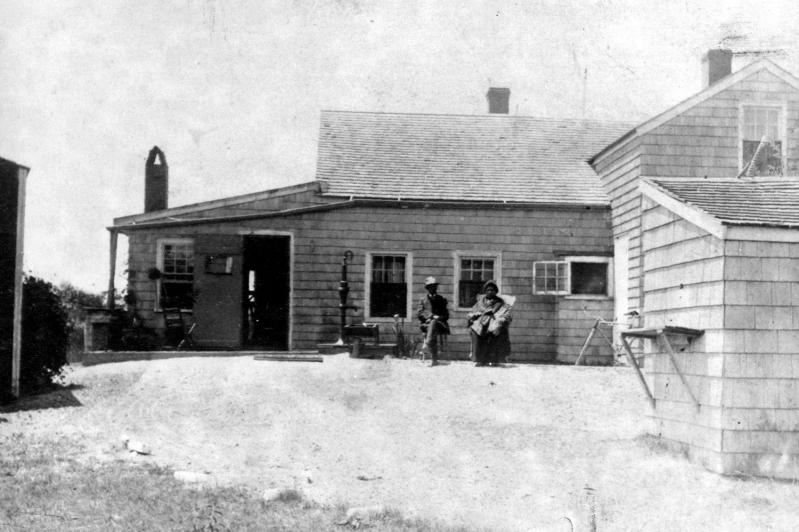 John was the son of Betty and John Fowler (1817-1879, known as Blind John). Jeannette Edwards Rattray described a painting from the Georgica Life-Saving Station from 1871 showing Blind John Horton in a dory haul-seining with Capt. Nathaniel Dominy Sr. John followed his father to sea, working as a whaler.

John's sister, Sarah Melissa Horton (1857-1926), married George Fowler (1860-1931) and resided in the nearby recently restored Fowler House. John and Julia lived on Three Mile Harbor Road, a couple of doors away from the present-day site of the Neighborhood House. Like the Fowlers, the Hortons were usually labeled as Black in government records, but they also identified with their Native American heritage.

Red Thunder Cloud, the controversial local anthropologist, collected and probably copied this photograph. In his caption, he focused on the skill of indigenous whalers here and how the Montauketts taught the early settlers offshore whaling. John Horton supposedly was the last Montaukett to "ship" on whaling voyages and travel around Cape Horn. The last local whaling voyage left Sag Harbor in 1870, when John was only 18, so he probably left the area to work as a whaler, traveling to somewhere like New Bedford, Mass., as other local young men did.

By 1900, the census lists John Horton as a "laborer," and his wife, Julia, is identified as a "laundress" in 1910. The Hortons were active in the community, and John Horton's whaling stories are fondly remembered by Red Thunder Cloud. This newspaper records Julia Horton hosting the "colored Odd Fellows and the sisters of the Household of Ruth" in 1913. By 1916, the house appeared in Raymond's name on the atlas. John lived to be 88 years old, dying in March 1940.

Andrea Meyer, a librarian and archivist, is the head of the Long Island Collection at the East Hampton Library. She can be reached at [email protected]hamptonlibrary.org.