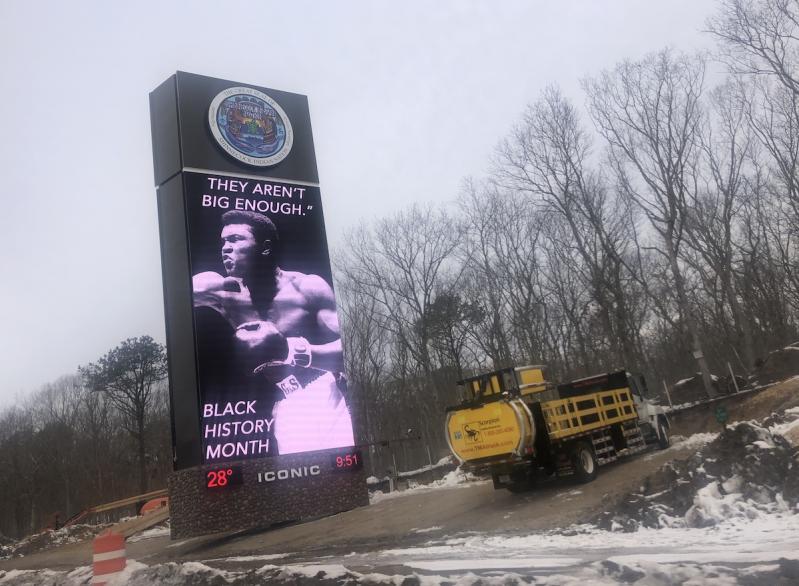 Plans will be announced on Wednesday for a new casino on an 800-acre area of Shinnecock Indian Nation land, a spokesman for the nation confirmed Tuesday.

At 11 a.m. on Wednesday, the tribe and its development partner are expected to provide more concrete details. Construction on the casino is scheduled to start in the summer.

The announcement comes on the heels of the completion of the second of the tribe's two 61-foot-tall electronic billboards, which it refers to as monuments, on historical aboriginal land in Hampton Bays on Sunrise Highway. Bryan Polite, chairman of the Shinnecock Tribal Council, said the sign was illuminated last Thursday afternoon, though with little fanfare because the Shinnecock community is in deep mourning over the loss last week of two of its members, Edward Gumbs and Wayne Crippen.

The Shinnecocks' own enterprise fund has finally started to accrue revenue from the first electronic sign, Mr. Polite said. Proceeds go toward social programs such as day care and utility assistance, along with public works and environmental initiatives.

"Completing these projects is more than economics for us. It’s cultural pride," Mr. Polite said. "We can accomplish things even though we are faced with obstacles that precluded us from doing these things in years past. People are prideful and happy that we are trying to move the Nation forward and moving toward economic sustainability."

Construction of the second sign took only a couple of weeks and proceeded despite a stop-work order issued by the State Department of Transportation that threatened a fine of $1,000 per day that work continued, plus $1,000 per day for the first billboard as well. The state has maintained that the billboards stand upon a state right-of-way, but in May, a State Supreme Court justice rejected the state's request for a preliminary injunction to have the first sign removed.

"All of the accusations they have made have already been litigated and been denied," Mr. Polite said of the D.O.T. "The Nation has always, and still maintains, that we have authority over our own sovereign lands and the D.O.T. lacks authority. The court reiterated our position about sovereignty over the lands."

State Assemblyman Fred W. Thiele Jr. has said while he does not support a new gaming facility and feels the two highway signs are "obtrusive and out of character with the community," the state is at fault for not working with the Shinnecock Nation on the issue of economic development.

"The failure of state agencies to constructively engage the Shinnecock Nation regarding economic development has resulted in the current conflict and controversy that is counterproductive," Mr. Thiele said on Tuesday. "I urge the governor and state agencies to engage in discussions with the Shinnecocks to resolve these issues."

Among the first images that appeared on the new billboard were a public service announcement from the musician Roger Waters in support of the Shinnecocks' sovereignty and a series of messages raising awareness of Black History Month.