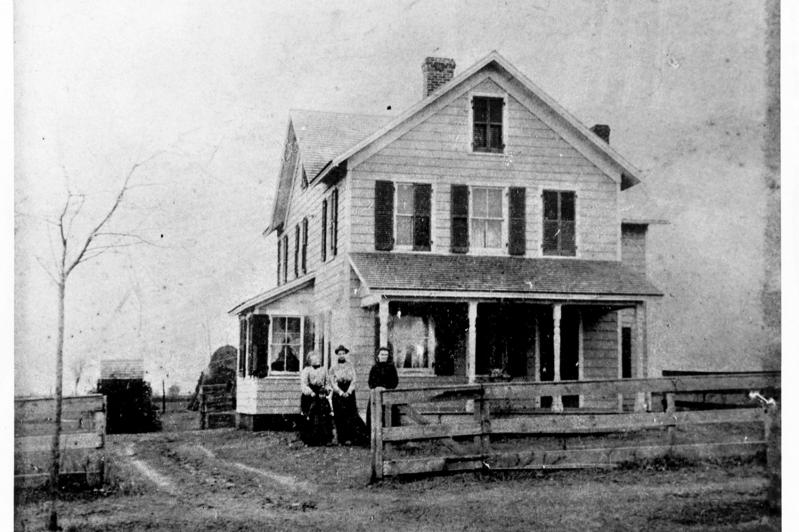 In this photograph, three unidentified women stand in front of Capt. Joshua B. Edwards's (1830-1915) house, which was on Atlantic Avenue and Old Montauk Highway in Amagansett. Local legend holds that sections of this house were made from timbers of early shipwrecks.

Captain Edwards, son of Nathaniel Talmage Edwards (1806-1881) and Irena T. Bennett Edwards (d. 1885), was a well-known 19th-century deep sea whaler. Along with his many voyages and his longtime presence in the community, Edwards is remembered for capturing the last offshore whale off Amagansett in 1907. He married Adelia Stratton Conklin (1847-1929) on Sept. 30, 1868.

This house was the site of a strange story reported in The East Hampton Star on Nov. 24, 1893, when an unidentified man entered the Edwards home through an open window. The intruder built a fire in the stove and began to cook himself breakfast. He fled when Mrs. Edwards appeared and called for her husband. Later, the intruder was found and taken to the Overseer of the Poor, Edward M. Baker (1849-1914). Nothing in the house or on the property was taken.

The property also served as the home for several accessory structures, including Amagansett's original schoolhouse from 1802. Captain Edwards bought the schoolhouse from Marcus Hand, who won it at auction for $212. Edwards moved the building to his property, where he used it as a boathouse to store gear.

Capt. Joshua B. Edwards died on May 20, 1915, at 84. He was buried in Amagansett. Joshua's son Capt. Everett Edwards inherited his father's house, which remained vacant until 1938, when it was sold to Magna Merck Sheldon. When the Edwards family sold the house, it still contained old whaling gear.

Free Car Seat Checks in Southampton
Battle of the Books, and More Fun for Teens
This Week's Happenings in Montauk
END_OF_DOCUMENT_TOKEN_TO_BE_REPLACED