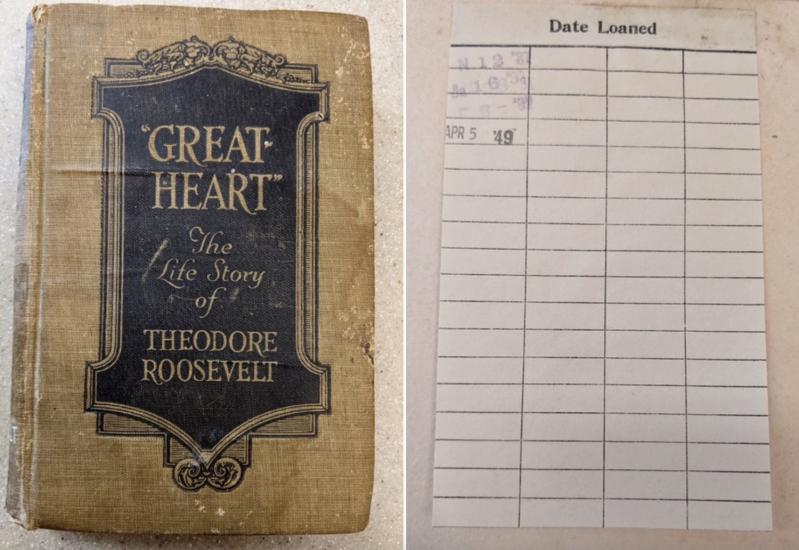 If books could talk, a first-edition copy of "Great Heart: The Life Story of Theodore Roosevelt" might have a fantastic story to tell.

The Amagansett Library's copy of "Great Heart," chronicling the 26th President of the United States, was belatedly returned, the late fee waived. It had been checked out on April 5, 1949, and was returned on Friday, approximately 71 years and nine months overdue.

John Moss, who retired from the East Hampton Town Police Department in 2005, discovered the book while going through cartons in his Mattituck house. "I have a lot of books," he said on Tuesday. "I like reading. Especially now."

He does not know how he acquired the book. It may have belonged to one of his parents, he said -- many in his collection were inherited from his late mother, an Amagansett native -- but he also buys books at yard sales. Noticing a borrowing card affixed to the back page of "Great Heart," "I put it in my truck with the intent of going back to Amagansett at some point." Mr. Moss makes weekly visits to Sagaponack, where his mother-in-law lives and where he keeps bees. "I thought it would be fun to return it."

The library's copy of "Great Heart" was printed in 1919 and features the original bookplate, said Lauren Nichols, the director, as well as the circulation policy on the back cover. "Books may be kept two weeks and if desired renewed at the end of that time except in the case of new books when one week is the time limit with no right of renewal," according to that policy. In 1949, when Jean Talmadge was the librarian, "A fine of one cent per day is charged for books kept over the regulation time," according to the policy.

"I said, 'I'm not paying the late fee!' " Mr. Moss said he told the librarian last week. He needn't have worried: the library discontinued collection of overdue fees last May.

The circulation policy included another, somewhat ironic, note: "Any books exposed to contagious diseases will not be received at the library." The Amagansett Library reopened to the public several months ago, but also offers curbside pickup. During the novel coronavirus pandemic, its many classes, author talks, and other events continue via video conference.

"The book is in very good condition for being over 100 years old," Ms. Nichols said. "There something magical about a library book finding its way home after such a long time!"

With Reporting by Isabel Carmichael