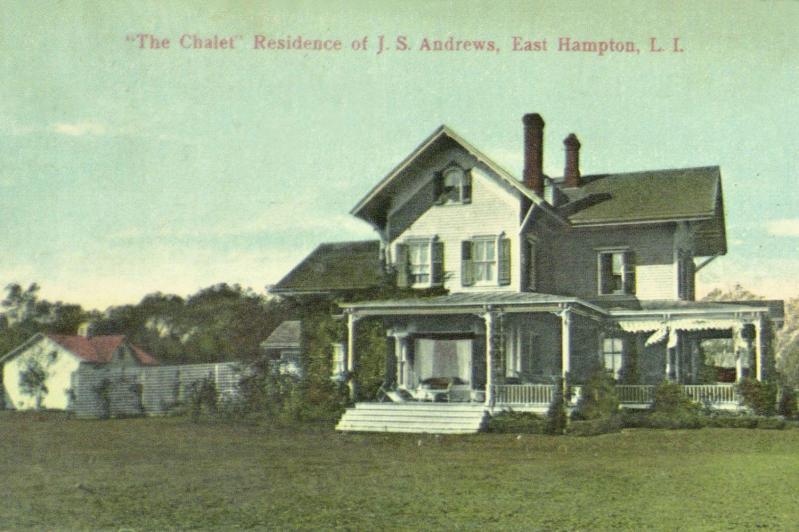 This postcard from the Harvey Ginsberg Postcard Collection shows the house known as "the Chalet" off James Lane in East Hampton. It was built by Charles Peter Beauchamps Jefferys (1831-1910), who in 1866 first came to East Hampton, where he boarded with Jeremiah Mulford and bought several acres of land along Hook Pond.

Jefferys, one of the engineers who built the Pennsylvania Railroad, had a summer house, Sommariva, constructed in 1872. This property was one of the original four summer villas of East Hampton. In 1879, he started construction on a second house for his brother-in-law to live in, and positioned it right next to his own. This property was the Chalet. During its construction, its frame had to be raised twice because it was blown down in a harsh gale that caused severe damage locally.

In 1887, Abraham and Amy Mills bought the property. They brought in George A. Eldredge to build additions to it in 1898, including a large three-story wing. The following year they contracted to have the house painted by W.H. Hooper. In January of 1912, the Mills's property was sold to their tenant, John Stewart Andrews (1864-1912), who had spent three summers there. Coincidentally, like the original homeowner, he was prominent in the railroad industry.

Andrews died of heart failure on May 22, 1912, a few months after he bought the property. His wife and family continued to live there and rent it out for several years. By 1941, Dr. Stuart Craig owned the Chalet. He sold it three years later. Today, Jefferys's property is marked by a private roadway up to James Lane.