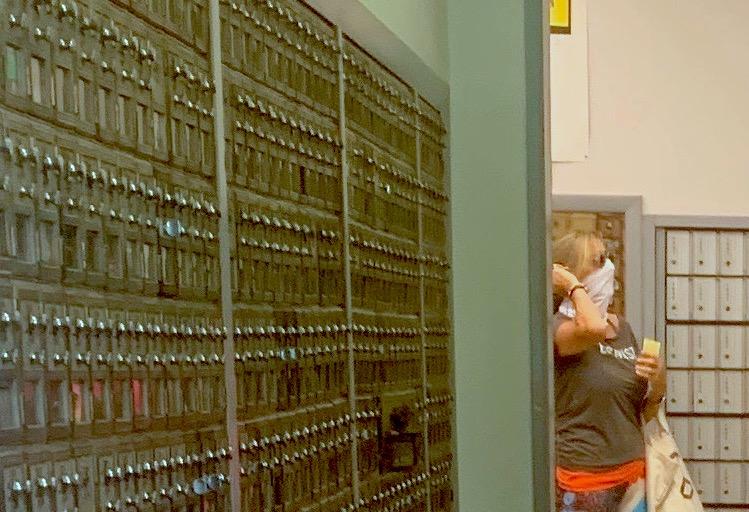 How many of the 1,800 Amagansett boxholders would prefer to have their mail delivered to their physical addresses rather than pick it up themselves?
Doug Kuntz
By Irene Silverman

A long-simmering campaign to bring mail delivery to Amagansett, said to be the only hamlet in town without it, picked up some steam Monday night at a virtual meeting of the Amagansett Citizens Advisory Committee.

According to Jim MacMillan, a former committee chairman who, with Michael Cinque, is heading up the effort, there are 2,004 boxes at the Amagansett Post Office. Since March, with a flood of newcomers washing up here in the wake of Covid-19, demand has increased, and only 200 or so remain vacant. "The post office is inadequate to the population here now," said Mr. MacMillan, citing a mountain of unclaimed Amazon packages he said he had seen out back.

The question is just how many of the 1,800 boxholders would prefer to have their mail delivered to their physical addresses rather than pick it up themselves. Mr. MacMillan, Mr. Cinque, and others intend to find out the answer, starting with a survey of boxholders and continuing, if the numbers warrant, with a petition to the local postmaster, who would then submit it to the United States Postal Service.

The Postal Service says on its website that it "weighs many elements in any decision to create a new service route, including but not limited to customer density, road access and road maintenance, growth conditions in the area, numbers of residents impacted by the change, distance from an existing post office and whether the request for delivery will create sufficient workload to justify a route," adding that "the presentation of a petition is not an assurance that delivery will be extended."

Monday night's discussion centered on raising money to design, print, and possibly mail notices to every boxholder, notifying them that a petition is in the works and to watch for it. Mr. Cinque, the owner of Amagansett Wines and Liquors on Main Street, started a fund in November by asking for $50 donations, and told the committee that he'd collected $350 to date from seven donors. That number almost doubled as the meeting went on and members pledged more. Donations are being accepted at the wine store, which, said Mr. Cinque, will underwrite the printing bill.

Vicki Littman suggested putting fliers in the mailboxes, which would save on postage. "Make sure we get a good design, so people don't toss it," said Michael Jordan. Mr. MacMillan suggested using change.org as well, which helps people organize petition drives.

A State Department of Health informational webinar on the topic of vaccines began at the same time as the committee meeting on Monday, and a number of members chose to attend that stream instead. Because of their absence, Rona Klopman, the chairwoman, proposed that the committee hold a special session on Jan. 25 to discuss the mail delivery question in more detail, and the committee agreed.