A push for change and progress on the East End 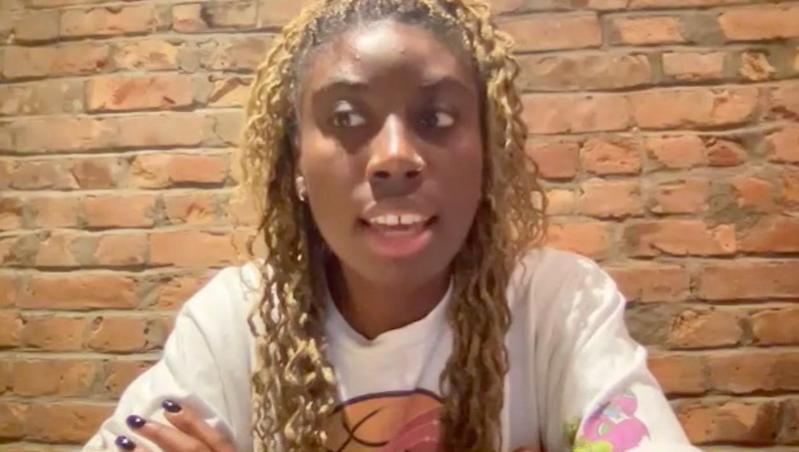 Nia Dawson is one of the founders of Exposing Inequities in the Hamptons.
By Judy D’Mello

There is a line from the groundbreaking anthropology book "Sapiens: A Brief History of Humankind" that springs to mind when speaking with Nia Dawson: "A single priest often does the work of a thousand soldiers."

Ms. Dawson, 22, Black, and a third-generation Bridgehampton native, found herself in the midst of what she believed was a racially fueled incident outside the Sag Harbor Launderette in August. Angered, upset, but not shocked, it led her to galvanize family members, friends, and notable figures in the community to form an organization called Exposing Inequities in the Hamptons, or EIITH.

The Launderette incident happened when the owner, William A. Tabert, reportedly asked to sit on the bench outside his establishment that was then occupied by Ms. Dawson and her 11-year-old brother. When she explained that they were following social distancing guidelines, especially since her brother was unvaccinated because of his age, Mr. Tabert, who is white, became verbally aggressive, she said, and later shoved and pushed her when she tried to enter the laundromat to retrieve her clothes. All of this was filmed by her brother on his phone. During the incident, Ms. Dawson said that Mr. Tabert did not use racist language but did yell that she would need to use the back entrance.

Mr. Tabert was charged with harassment in the second degree, a violation. A court date has been set for Nov. 19. Meanwhile, he issued an apology, admitted he was wrong, and told The Southampton Press he hoped "to rekindle a friendship with her and her family."

This is where the "Sapiens" priest comes in.

"At the beginning of all this, I was asking myself, 'Why me?' Like, 'Why is it happening to me?' " said Ms. Dawson over Zoom last week. She now lives and works in New York City after graduating in May from Baruch College. "But then my mom and my pastor, and everyone else who's been so supportive, said, 'Why not you?' "

Ms. Dawson explained her love for community and the realization that such an incident wasn't isolated or limited to her, but was something far bigger.

"I wasn't so shocked that this happened out there," she said. "But I wanted to take that fuel and use it to push for change on a greater scale. I just wanted to use this to create a community forum and a community-like atmosphere so that everyone can come and pour ideas, and stories, and testimonies that we can use as a catalyst. I see this incident as a catalyst too, to push for change and for progress out there. Because it's so often just swept under the rug."

After she posted details of the incident on social media, there was an outpouring of support from people who asked how they might help. Many even shared their own stories of what Ms. Dawson calls "micro-aggressions," small acts of personal violation -- racism, harassment, gender abuse -- but disguised as a joke, which she said she has experienced throughout her life.

Her mother, Tanya Dawson, who was also raised in Bridgehampton, reiterated Nia's accounts of racial abuse and insensitivity growing up on the East End. She added that more recently, her husband and son also experienced abuse separately. During a Trump rally last year, a random man drove by, made a gun-like gesture with his hands, and aimed it at her husband. Forming EEITH, she said during a recent phone call, is a call to action for anyone who has the courage to stand up and speak out.

"Enough is enough. Our days of bondage are over," she said, while emphasizing that this is a peaceful mission.

EIITH is still in its infancy and according to its website, its goal is, "to uproot discrimination and inequities while changing the narratives that have held the East End African-American community in bondage for far too long."

Its members include Tanya Dawson, Kathy Engel, a professor in the department of art and public policy at New York University, her daughters, Justine and Ella Engel-Snow, both lifelong friends of the Dawsons, the Rev. Tisha Williams of the First Baptist Church of Bridgehampton, Denise Merchant, a former Southampton School District special education director, Bonnie Cannon, the executive director of the Bridgehampton Child Care and Recreational Center, and several others.

The group's first organized event was a peaceful protest outside the Sag Harbor Launderette on Oct. 9. About 30 people attended to "stand up and speak out against social injustice." Subsequently, the group has met behind closed doors to discuss future plans.

"We are intentional about building with great care as we expect to be around for a while," Ms. Engel wrote in an email to The Star. "Which means taking the time to think through, listen deeply, gather information, as we develop. One thing is starkly, powerfully clear to us -- people want and need to be heard, to tell their experiences, uncensored. Another is that the lack of representation and inclusion of Black people, Indigenous, and People of Color throughout all systems on the East End continues to be untenable and unacceptable. We will be addressing these conditions."

The sharing of experiences of inequality is clearly at EIITH's core. "We have to talk about racial issues," said Ms. Cannon of the Bridgehampton Childcare Center. "If we don't talk about it, it will never change. We need to make more people aware and shine an even brighter light on racial inequality. Yes, it does exist in the Hamptons."

Historical amnesia has indeed led to marginalizing the contribution Black citizens have made to the East End's social and economic landscape. Nia Dawson's great-grandfather, for example, was Elick Pinckney, an early Black entrepreneur in the area who owned several properties on the Bridgehampton-Sag Harbor Turnpike. Today, however, only two remain.

"It's really disheartening to see them torn down, all the history torn down, and replaced by megamansions," she said, before adding, "I'm all for improvement, don't get me wrong. Change and improvement are a part of life and they're good. But it's never good when you go forward without acknowledging history."

The Launderette incident is seen by EIITH as a reflection of society at large, which seems these days to be a toxic combination of fierce tribalism, a dereliction of our politics, and a coarsening of how we talk to each other -- all factors that now feel so endemic to our lives as a whole. Tanya Dawson was quick to point out that she did not experience racism growing up on the East End a few decades ago.

"These are definitely different times," she said.

Ms. Engel also pointed to the incident's undercurrent of sexism. "Would the owner have done this to a big, strong man sitting on the bench?" she asked. "And there's probably an age aspect as well. This is a beautiful, powerful, young, Black woman sitting on a bench, eating BuddhaBerry with her little brother. So, there are all of these questions of power and control."