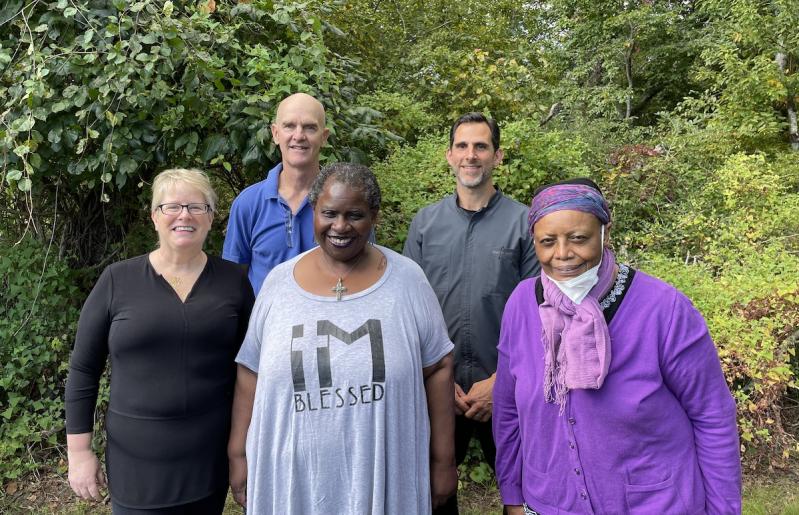 When he began donating such Tapovana Lunch Box offerings as vegetarian curries, soups, chutneys, coconut quinoa rice, and hydrating elixirs to the Bridgehampton Child Care Center's food pantry in January, Corey De Rosa, who has been working out of a fully-remodeled kitchen at the Bridgehampton Community House since January, wondered how the South Indian food would be received.

After all, he said, "the flavors are new to people and there's no meat in the meals; they're vegetarian, but well-balanced and satisfying. . . . They told me, 'Keep it coming.' "

"Everyone loves it," Bonnie Cannon, the center's executive director, said this week.

Ms. Cannon's mother, Gloria, began the center's food pantry 16 years ago, and works there seven days a week. The pantry is housed in a small white cottage at the center's entrance, and on Monday was filled with 70 or so chock-full bags of fresh food that were soon to head out. "Corey does an excellent job," said Ms. Cannon, who over the years has seen the meals the pantry provides to those in need grow exponentially, from 70 a week to 700 a week. The need has been particularly acute during the pandemic.

With Mr. De Rosa's contributions added to those from Quail Hill Farm and Amber Waves in Amagansett, and from Provisions in Sag Harbor, the center is "making deliveries all over now," Gloria Cannon said, "in Southampton, the Reservation, in Bridgehampton. . . ."

When the pandemic hit, Mr. De Rosa, a yoga instructor, closed his studio in Sag Harbor and began to create a takeout menu of South Indian food that he had been offering to his students after yoga sessions, which, by necessity, were switched to Zoom.

Soon, with the encouragement of John Battle, a fellow Sag Harborite who heads the Bridgehampton Lions Club and is also on the Community House's board, Mr. De Rosa was provided with a generous budget to completely redo the Community House's kitchen (the sole leftover being a 10-burner Garland range) so that he could make more meals and distribute them more widely. Now, with the help of a small staff and a couple of volunteers he's up to 40 to 50 meals a day distributed to the Child Care Center and to the Bridgehampton food pantry that Tom White oversees in the Community House's basement primarily. He has given away more than 2,500 meals this year.

Mr. De Rosa has also been selling Tapovana Lunch Box food and drinks at farmers markets and at the Community House. They can be ordered online, as well, through tapovana.com.

"I've been trying to keep up with the demand . . . we're pretty much maxed out," he said, adding that a fund-raiser may be held soon so that he can meet that demand.

"My pockets are empty," he said, with a smile.

But he was doing important work, said his visitor, who was reminded of a Tapovana tenet he had seen in the Community House's lobby: "One individual at a time our community is uplifted, one community at a time our world is uplifted."

It is much the same at the Bridgehampton Child Care Center, where Bonnie Cannon said of its food pantry, "You know, at the beginning of the pandemic 'seniors' were told to stay home, but Miss Mary [Trafton], who just celebrated her 91st birthday, my mother, who is 80, and Miss Carole [Nappi], and Miss Ruby [Madison], who are in their 70s, did not. They wanted to help, they had wisdom to share with the kids -- the kids love them. They wanted to be a part of things. It's a food pantry full of love."