Who doesn’t love a bargain in tough times? 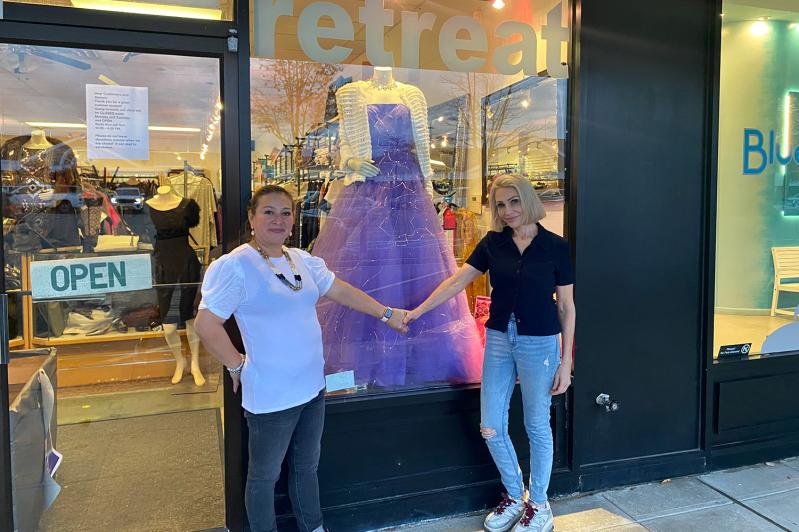 This was a year in which many of us tightened our belts, cleared out our wardrobes, and made conscious decisions to “do better” where the planet is concerned. It’s possible, then, that this pandemic-induced frugality partly contributed to clothing stores across the United States posting a 2.6-percent decline over the summer, with online sales, too, showing a 3.1-percent drop, according to a CNBC report.

But while the headlines about the miserable state of American retail continued to mount postsummer (though it’s trending upward now), something extraordinary was happening at the Bridgehampton Commons.

The Retreat Boutique, the thrift store offshoot of the Retreat, an East Hampton domestic violence shelter, posted end-of-summer takings of over $200,000 — its largest to date.

All revenue from the store, which opened about 15 years ago, goes toward the nonprofit Retreat, which provides free services, advocacy, and shelter for victims of sexual abuse and domestic violence.

When the pandemic forced the shop to close last year, Jessica Burdine, its manager of 12 years, moved the majority of the clothes into her home and tried selling online, to make up for lost revenue.

“But online shopping just wasn’t that successful,” she said over a recent phone call. “Because what really drives the store is the experience of thrifting. Going into a store that’s curated and being able to indulge your love of clothing style and having an uplifting experience.”

So, Ms. Burdine and her assistant, Alexandra Velez, used their downtime to completely revamp the store. They got rid of large furniture items, which Ms. Burdine said took up too much space and often took ages to sell, and, after the store reopened in July, they began focusing on clothing and accessories to create what Ms. Burdine calls “the ultimate shopping experience.”

“We started curating in a really intense way with an emphasis on designer clothes, handbags, costume jewelry, and men’s clothes,” she said. “No other thrift store in the area is curated to such a heightened degree. We now offer a beautifully edited collection of designer items.”

The Retreat Boutique’s new incarnation certainly makes vintage trawling fun. On a recent trip to the store, there was an Audrey Tautou-esque, Yves Saint Laurent dress for $100, a Dries Van Noten jacket for $175, Stella McCartney streetwear, Manolo Blahnik shoes, and a J. Crew sweater for $10. There’s a rack of quality cashmere sweaters for $30 and high-end jeans (Paige, Mother, Citizens of Humanity), also for $30.

Meanwhile, this writer got her retail-related dopamine hit, scooping up a brand-new Prada pantsuit (original tags and labels still attached) for a tiny fraction of its eye-watering original price.

America seems to be in the midst of a “preloved” garments boom. The New York Times reported earlier this month about a resurgence of interest in vintage clothes, stating that thrifting is “a fun way to play around without spending so much money (not to mention being conscious of sustainability).” Indeed, the secondhand clothes market in the United States has grown 21 times faster than retail sales of new clothing over the past three years, according to ThredUp, an online platform that aims to modernize thrifting.

Environmentally, buying preowned garments and contributing to a circular economy is considered the stylish and planet-friendly way forward. The Environmental Protection Agency reported that the average American has been estimated to throw away around 81 pounds of clothes every year — nationally, that’s roughly 13 million tons a year being dumped into landfills or burned. It also takes 1,800 gallons of water to grow enough cotton for a pair of jeans, and recent reports of the working conditions in garment factories, particularly in developing countries, are enough to make any fast-fashion shopper queasy.

However, a spending spree at the Retreat Boutique benefits another reality that’s equally sobering: domestic violence. Surveys around the world show that intimate-partner violence began to spike in 2020, and as the pandemic dragged on, so too did the abuse.

“During Covid in 2021, we have had more requests for counseling than ever,” said Loretta Davis, the Retreat’s executive director. “In September 2021, we responded to 403 emergency hotline calls requesting services. We have not had that many calls in one month since 2015. On average we receive 250 to 300 calls per month.”

“Revenue from the store helps to cover the cost of our free services. Thus, it goes to help survivors,” she reiterated, adding, “There is so much value in the store as a safe place where individuals can learn about all the bilingual resources and services available to them at the Retreat: legal help, counseling, financial empowerment, and job readiness.”

Ms. Davis also pointed to the fact that many customers who might be experiencing abuse at home often visit the store to shop, then leave with the domestic violence hotline number. “Thereby starting on the road to a new life free from abuse,” she said.Anyone who is sheltering at the Retreat receives a $150 credit to spend at the boutique. “Very often, the clients arrive at the shelter with only the clothes on their back,” said Ms. Burdine. “So, we give them a stipend and then they can have a shopping experience at the store.”

For many on the East End, buying secondhand is a necessity rather than an option. So the boutique stocks a large selection of warm clothing and outerwear that’s affordable for the local work force and families in need — a very pertinent point, stressed Ms. Davis, because 95 percent of victims of abuse also suffer from financial abuse.

There was a time when charity thrift shops were just a hodgepodge of pillbox hats, dog-eared Danielle Steel novels, and polyester pants that no one really bothered with, except for a few elderly women and the odd teenage goth. Not anymore. At least not in Bridgehampton, where canny shoppers can now feel the heady rush of scoring a vintage gem and supporting a good cause at the same time.

Celebrate Hanukkah All Across Town and at Home
Stuffed With Turkey? Walk It Off
Blood Drive Tuesday in Bridgehampton
END_OF_DOCUMENT_TOKEN_TO_BE_REPLACED