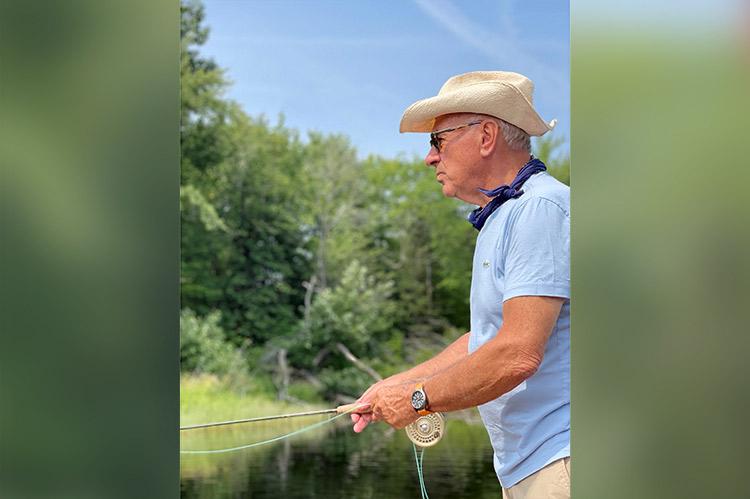 Lenny Ackerman, an attorney, has published a compilation of his columns for a California newspaper in “Here Back East,” a book showcasing his varied interests and experiences.
Geige Silver
By Christopher Walsh

Many residents of East Hampton Town know, or know of, Lenny Ackerman. A successful attorney and longtime principal of the Ackerman, Pachman, Brown, & Goldstein firm on Pantigo Road, he is often seen representing a client before one of the town or village planning or zoning boards.

But Mr. Ackerman is a man of many talents, and interests. These recently manifested in the publishing of “Here Back East,” a collection of his columns for The Mountain Messenger, a weekly newspaper serving Sierra County, Calif. In it, he writes of varied topics, though tales of his fishing adventures in Maine and elsewhere are prominent. But so are family and friends, impromptu conversations with strangers, and the occasional political discussion with any of the above.

“Here Back East” is a breezy collection that follows Mr. Ackerman from May 2020, early in the Covid-19 pandemic, to late August of this year. Brief dispatches are regularly peppered with keen observations of matters large and small. “Offices are still empty and there are no evening lights on along Park Avenue and the lower Wall Street financial district,” he writes of Manhattan in October 2020. “But there are glimmers of normalcy as so many of the restaurants have spilled out onto the sidewalks and bike lanes. . . . The empty stores are like pauses between the busy restaurants. Broadway and Times Square are abandoned as is the West Side around Lincoln Center. From above large areas of the city are dark. It is like a wartime blackout. Perhaps it is a war, but one that wasn’t manmade, and in which the only weapon to ensure victory is a vaccine needle.”

The hardcover book, featuring a watercolor painting by the author on its cover, is for sale at a bookstore in Florida, where Mr. Ackerman has a residence, but those seeking a copy locally have been asked to call Mr. Ackerman’s office at 631-324-3942.

How an East Hampton attorney came to write a column for a newspaper serving a rural county in California is itself an interesting story. “This all started because of Covid,” Mr. Ackerman said last week. “I had all this extra time.” He had also fished in the vicinity of Downieville, Calif., where Carl Butz recently came out of retirement to buy The Messenger — founded in 1853 and to which Mark Twain had contributed stories — when its longtime owner retired with no plans for the newspaper’s continued existence. “There’s wonderful trout fishing there,” he said.

Mr. Ackerman read about The Mountain Messenger’s near-death experience in a February 2020 article in The New York Times, and “struck up a conversation” with Mr. Butz. The men have a potent, and poignant, bond: “Carl lost his wife about the same time I lost mine,” Mr. Ackerman said. Writing, in the wake of Judie Ackerman’s death in August 2017, helped him work through grief, he said.

Mr. Butz’s wife died that same year. “He and I were writing to each other,” Mr. Ackerman said, “and he offered me the opportunity. He said, ‘I like your writing. Would you be interested in writing a column?’ “ The Messenger’s new owner, Mr. Ackerman said, “wants it to be more like The Atlantic, with a lot of people writing different, diverse columns, and make it more interesting. How much news comes out of Downieville, Calif.?” he asked of the town and its 282 residents, according to the 2010 United States census.

Prior to his column in The Messenger, Mr. Ackerman’s writing was in the form of letters to his late wife. “Out of that came these columns that reflected where I was, what I was doing, and what I thought other people might be interested in,” he said. But “I’ve always had an interest in newspapers.” With the late Zig Schmitt, a onetime law partner and former East Hampton Town attorney, he once tried to acquire The Sag Harbor Express. Along with varied interests, including classic cars and watercolor painting, “I’ve always been interested in writing. It’s just an outlet for me to get a couple hundred words done.”

“I never write political,” Mr. Ackerman said, and he tends to shy from disagreement with those depicted in “Here Back East.” One minor exception is “Inauguration,” in which he writes movingly about the poet Amanda Gorman’s recitation at President Biden’s inauguration. “Beyond the who, where and how,” he wrote, “her delivery and the substance of what she said rose to an oratorical level not witnessed in our country for the last four years. It was as if all the windows and doors had been flung open allowing fresh air and sunlight into stale and fetid rooms.” The poet’s reading, he added, returned him to the experience of hearing Robert Frost deliver “The Road Not Taken” more than 60 years prior.

Reflecting the antiquated infrastructure of The Messenger — its publishing software is from the mid-1990s, according to The Times — Mr. Ackerman writes “on very old Olympia typewriters.” Alison Stone, who works in the Ackerman, Pachman, Brown, & Goldstein offices, “cleans them up and sends them to Carl,” he said.

“They all reflect where I am, what I’m doing,” Mr. Ackerman said. “Just what I did that day, that moment, and what I take away from it. Everyone thinks of me as this hard-driving lawyer in front of the Z.B.A., planning, the village board. There’s another side to me.”

Celebrate Hanukkah All Across Town and at Home
Stuffed With Turkey? Walk It Off
Blood Drive Tuesday in Bridgehampton
END_OF_DOCUMENT_TOKEN_TO_BE_REPLACED