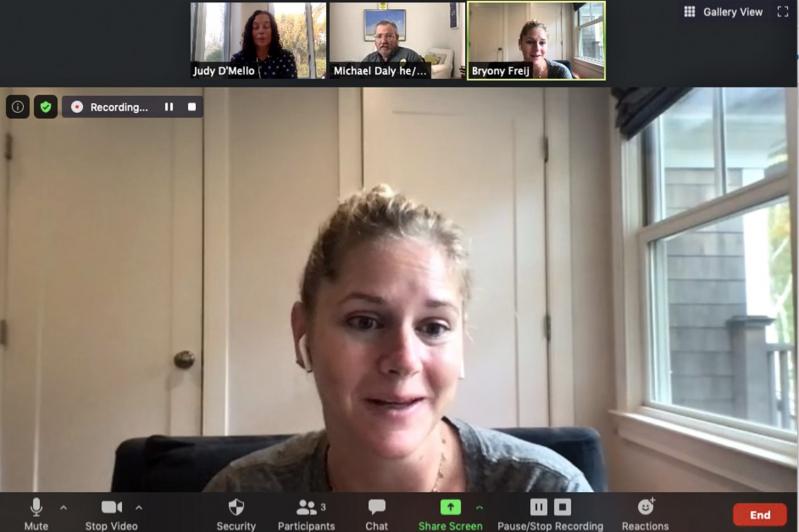 Bryony Freij and Michael Daly of East End YIMBY are campaigning for Sag Harbor Village to change its zoning laws to allow for affordable housing that will help low-income families stay in the area.
By Judy D’Mello

One of the most basic of human needs -- shelter -- is simply not attainable for a substantial number of East End residents.

This is the foundation upon which the Sag Harbor group East End YIMBY (Yes in My Back Yard) was built. Essentially Nimby's dialectical opposite, the group has recently been ramping up its advocacy efforts to create more affordable housing close to home, in response to a nationwide housing crisis fueled by the pandemic that is acutely affecting low-income households everywhere.

At the Sag Harbor Village Board meeting on Nov. 9, Bryony Freij, a Sag Harbor resident and one of East End YIMBY's key members, presented village officials with five recommendations for inclusionary zoning, which the local housing advocates would like to see adopted by Sag Harbor Village.

First on their list: the introduction of a tax levied on property buyers who tear down single-family houses in order to build larger ones. The revenue received would go "solely to community housing initiatives in the village, Ms. Freij said. "Also under this measure, multifamily homes' conversion to single-family dwellings would not be permitted in the village unless a large fee for each unit lost in the conversion was paid to an affordable community housing fund."

Second, the group asked that the village implement inclusionary zoning changes to allow for the conversion of single-family homes to multifamily ones. Third, it wants the village to allow for accessory dwelling units, or A.D.U.s, to be built in the backyards of village houses, and fourth, it advocates creating a work-force housing district, a designated area with affordable housing for first responders, health care workers, teachers, social workers, and other key professionals whose earnings fall short of the East End's soaring cost of living. Finally, Ms. Freij, who is a social worker and psychotherapist, proposed that Sag Harbor allow for existing spaces above retail or office units to be used as residential rental apartments.

Ms. Freij also pushed the board for answers on specifics, such as a timeline for enacting changes that might help address the community's affordable housing crisis. "When will the board take action and what will they tackle first?" she asked.

Her group did not receive a response on the more pointed questions, but Ms. Freij and Michael Daly, a real estate agent who founded East End YIMBY in 2017, remain steadfast in their mission. Over a Zoom chat, the pair expressed their determination and motivation to keep fighting for more affordable housing to be built in Sag Harbor.

"We can't afford to lose the people who can't afford to live here," Ms. Freij said. "I work with children and families at East End Pediatrics and a lot of those families are housing-insecure -- young kids who don't know what school district they're going to be in in the fall, or if they're going to be able to live here. And then we started losing families, especially since the pandemic, people who I want my kids to go to school with. I just started feeling like, gosh, we're losing all these people who are first responders, essential workers, and low-income families, all of whom make up a vibrant community that we need."

Data released by the United States Census Bureau in 2020 revealed that nearly 11 percent of East Hampton's population lives in poverty, compared to 7.2 percent in Sag Harbor, 7.6 percent in Southampton, and 10.5 percent nationwide. By contrast, a recent New York Times article reported that the median property sale price in the Hamptons hit just over $1.2 million in 2020, a 40 percent increase from 2019, and well beyond the reach of low and middle-income East Enders.

As a result, the term "affordable housing," especially in the largely unaffordable Hamptons, has become laden and even oxymoronic.

Mr. Daly's interest in the issue was piqued after a trip to Cape Cod, where he attended an affordable housing advocacy training session. He returned to Sag Harbor, formed East End YIMBY, and offered similar training sessions for local residents, which were never well attended, he said. It wasn't until this past summer, after joining forces with Ms. Freij and her Solidarity Sundays group -- local parents who tackle similar societal issues by campaigning in various ways -- that its efforts became more dynamic. Mr. Daly called Ms. Freij "the catalyst." Then, he added, "She's like the fire to all this dry wood that we've been building up. And we are taking action."

Members attend town and village board meetings in East Hampton, Southampton, and Sag Harbor, as well as housing authority meetings to learn more about the issues around community housing, and become the voices for local advocacy, or, as Mr. Daly put it, "to be a louder voice than the usual cast of characters who show up, you know, the Nimbys, in opposition to these kinds of efforts."

The Sag Harbor Village Board announced the formation of an affordable housing subcommittee in July, co-chaired by Bob Plumb and Ed Haye, both village trustees. Two months ago, East End YIMBY presented them with an 11-page document that outlined a switch to inclusionary zoning from more exclusionary regulations, which, according to Mr. Daly, exists from decades of "local people coming on boards and creating zoning, predominantly single-family zoning, which only serves to protect their little fence areas by making sure that there's no multifamily housing available," he said.

Ms. Freij said she was encouraged by the board's commitment to prioritizing the community housing crisis in Sag Harbor, noting that last week's board meeting was the first she had attended that had affordable housing on the agenda.

"I look forward to being there next month to find out what has been done," she said. "I don't want to just sit around and talk about how it's a problem. We have the will to do something about it and I have hope that Sag Harbor could be on the forefront and an example for the hamlets around us for what can be done."

Celebrate Hanukkah All Across Town and at Home
Stuffed With Turkey? Walk It Off
Blood Drive Tuesday in Bridgehampton
END_OF_DOCUMENT_TOKEN_TO_BE_REPLACED