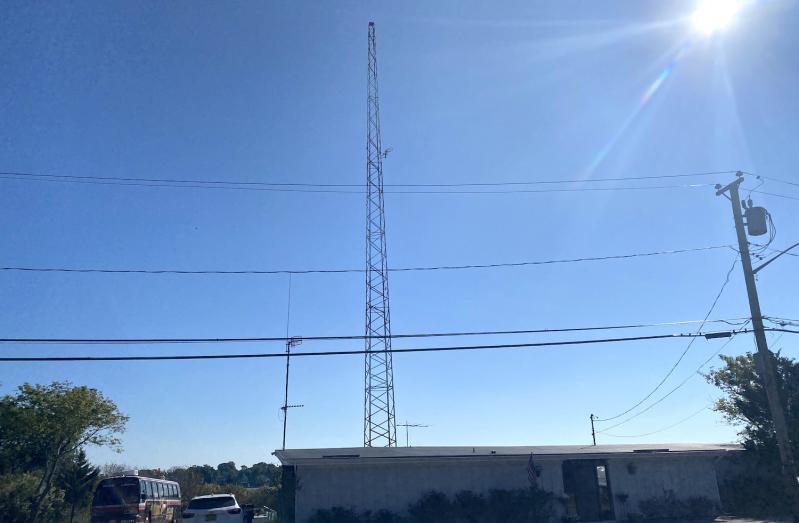 A proposal to replace the WLNG radio tower in Sag Harbor Village with a cellphone tower is facing fierce opposition from neighbors.

The radio station is seeking to replace its existing 165-foot lattice tower with a monopole of the same height that would hold 15 antennas, including eight installed by Verizon, six by AT&T, and one for WLNG’s radio transmissions, all of which would be concealed in a flagpole. Two gas-powered generators would also be installed on the property.

The proposal is opposed by a group of more than 200 neighbors who contend that the tower and the associated equipment would negatively affect the character and property values of the area, create a visual blight that would taint views from the village’s historic district, and pose an environmental threat to nearby Sag Harbor Cove.

“Although the plans call for a concealed tower disguised as a giant flagpole, it will not be just a flagpole, it will be a massive commercial telecommunications compound,” says a statement on a website launched by the group.

In an effort to improve cellphone service, the village board approved an application from Verizon in the summer of 2020 that allowed the company to install a temporary tower called a cell on wheels (or C.O.W.) at WLNG on Redwood Road. The board was set to vote on a proposal to extend the use of the C.O.W. at a meeting on Oct. 12, but after Emma Hamilton, a resident of Redwood Road and a member of the group opposed to the tower, voiced concerns about the proposal, the board tabled the matter.

“The long-term existence of a temporary C.O.W. could set a precedent for the installation of permanent cellular equipment on this site without proper due process,” she said. “There are multiple other options for cellular equipment.” The group’s website suggests the village’s impound lot near the recycling center on the Bridgehampton-Sag Harbor Turnpike, a Suffolk County Water Authority water tower, the firehouse on Brick Kiln Road, and property owned by Verizon on the Turnpike as more suitable sites.

“We’re not arguing that we don’t need an improvement in cell service,” Ms. Hamilton said later that week. “We’re saying the station is not the right spot for the tower.” Although the neighborhood is already home to a 165-foot radio tower, “we’re fond of the lattice tower,” she said. “It’s transparent, and historic.”

The group was pleased to see the C.O.W. application tabled, “but we don’t think the battle is won, we just bought some time.” The cell tower proposal will require approval from the village board, the planning board, and the harbor committee, and Ms. Hamilton and her fellow members plan to keep the pressure on each step of the way. “We’ll be keeping an eye on all village meetings,” she said.