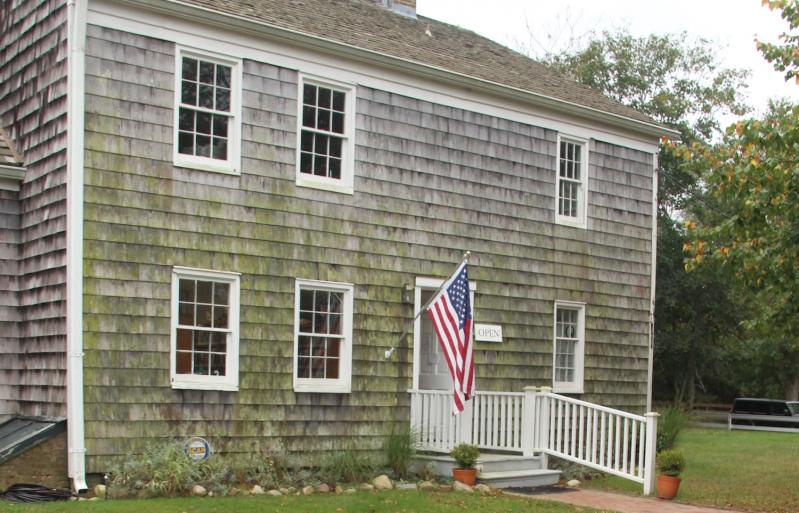 “The condition of the roof and chimney continues to worsen," trustees of the Springs Library wrote in a letter to the East Hampton Town supervisor. "Mold could be growing, exposing the volunteer staff and patrons.”
Durell Godfrey
By Irene Silverman

A long-awaited project to renovate and repair the dilapidated Parsons-Anderson House, home of the Springs Library, has begun.

More than two years after Drew Bennett, a town engineer, submitted a recommendation for repairs, nothing has been done, the library’s trustees wrote on Oct. 9 to Supervisor Peter Van Scoyoc and the East Hampton Town Board, imploring the town to take immediate action. “How much longer can this drag out?” they asked. “A few more heavy rains or snow load melt could cause a flood or ceiling collapse.”

Between June 2019, when the town first asked Mr. Bennett for an assessment, and July 2021, when all three firms that finally bid on the job were judged “unqualified,” several roofing quotes were rejected, chimney work was added to the proposal, the property was surveyed, a tree was removed for “safety reasons,” and there was a termite examination (no termites were found). In May 2020, the town issued a bond authorizing $200,000 for the project, money that still awaits.

“Water stains are now showing up on the ceiling on the second floor,” the trustees wrote. “The condition of the roof and chimney continues to worsen . . . mold could be growing, exposing the volunteer staff and patrons.” Reminding Mr. Van Scoyoc, who is up for re-election in less than two weeks, that he’d promised in his last campaign to repair the building, which is on the National Register of Historic Places, the trustees suggested that “you have no interest in fulfilling your promises to the community of Springs.”

The response was swift. “I want to assure you that the needed repairs to the building are being addressed,” Mr. Van Scoyoc replied. “We have issued a second call for bids on the roof repair project, with a deadline of Nov. 10.” (The town’s legal ad calling for bids, first published in last week’s Star, was actually received by the paper two days before the trustees mailed their letter.)

The supervisor went on to explain that “due diligence and the requirements for municipalities as far as competitive bidding and the like do extend the timeline for public projects. Expert assessments, cost estimates, and plans and specifications must be ordered and produced before the town board can authorize work and expend public money.”

He also noted that “new challenges can arise that require changes to the specifications and plans,” adding that “I proposed and the town board has authorized a total of $300,000 in capital funds for the building, so there is adequate funding in place.”

Asked if she were “satisfied” with Mr. Van Scoyoc’s response, Deanna Tikkanen, president of the library board and of the Springs Historical Society, which manages the facility, said, “I am satisfied that they responded. It’s very frustrating, the length of time it takes to have any action taken. Why hasn’t something transpired since the paper trail? It goes on and on.”

Jackie Wilson, the board’s secretary, had similar concerns. “We have all these damp patches in the ceiling upstairs where the [historical society’s] archives are,” she said. “This has happened recently, and they are spreading. We worry that even if there is a bid, it then has to go through town procedures. Is anyone going to be getting up on that roof in December or January? One tends to think not.”