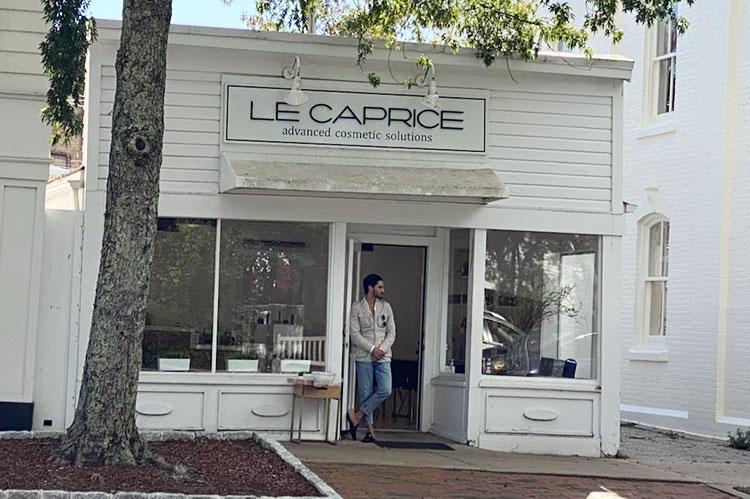 Employees of Le Caprice frequently stand in the doorway and encourage passers-by to sample products.
Jamie Bufalino
By Jamie Bufalino

An 87-year-old Springs woman said employees at the Le Caprice cosmetics store in East Hampton used high-pressure sales tactics to convince her to spend more than $14,000 on unwanted products.

While walking down Newtown Lane on Aug. 13, Carla Bell was stopped in front of Le Caprice by a store employee soliciting customers. Ms. Bell “was asked to try some facial cream, which she did, and then was enticed to enter the store to see other products,” according to a Sept. 14 incident report filed with the East Hampton Village Police Department. After she entered the store, two employees talked up the benefits of other products, applied some samples to her face, and aggressively encouraged her to buy them, said Ms. Bell. “I couldn’t believe how high pressure it was. I kept saying, ‘I have to get home,’ but they were relentless,” she said.

When Ms. Bell found out the suggested products cost $19,000, “I started giggling, I couldn’t understand why it would cost that much.” After she told them she couldn’t afford it, they reduced the price, she said, and offered to throw in products for her two daughters. Being able to provide gifts to her daughters was enticing. “I thought, ‘The girls will be so happy,’ ” she said. But it was a constant barrage from the salesmen that sealed the deal. “I felt completely hypnotized, and could not get out of it.” Suzi Leaver, Ms. Bell’s daughter, said her mother, a Holocaust survivor, is experiencing “some cognitive decline.”

Ms. Bell ended up purchasing four bagfuls of products — including a Thermal X “age-defying facial serum” and a Perfectio light therapy device — with an American Express card. The employee who initially approached her carried the bags to her car, she said.

The impact of what she had done hit her immediately. “I was so ashamed that I hid the stuff in the closet.”

More than four weeks went by before Ms. Leaver discovered the products. “My sister, who pays my mother’s bills, saw the credit card charge,” she said. She returned to the store with the unopened packages to seek a refund, but was told the store does not offer them. A sign posted at the register says, “exchange only within 14 days,” but Michael, a salesman who would only provide his first name, said on Monday that the store sometimes offers refunds for products returned within a week, but not a month. Michael said that Ms. Bell had received “a great deal,” and noted that she had returned to the store after the purchase to receive tips on using the products. Ms. Leaver confirmed that Ms. Bell had returned. “She figured if I’m stuck with this stuff, I should at least know how to use it,” she said.

Dayna Bell, Ms. Bell’s other daughter, wrote a letter to the store’s customer service department seeking to get a refund, and Nikki Weinstein, a representative, replied via email on Sept. 24 that the company’s lawyer had tested positive for Covid-19, but a meeting to discuss the matter was planned for Sept. 29. On Sept. 30, Ms. Weinstein emailed again to say that she too had tested positive. “The meeting will take place after I [. . .] get better,” she said. Ms. Bell also filed a report with American Express, which has credited her mother’s card while it investigates the transaction.

East Hampton Village police informed Ms. Leaver that the incident was a civil not a criminal matter, but Jennifer Dunn, a detective, said she is currently trying to get more information about the company that owns Le Caprice. “This is the first complaint I’m aware of, but I’m looking into whether there’s a larger issue happening.”

Oro Gold, another cosmetics company that previously operated in the same space and similarly had salespeople handing samples to passers-by and inviting them into the store for additional products, has been the subject of several complaints to the Better Business Bureau. “The salespeople used high-pressure sales techniques and false advertising to sell their terrible products for exorbitant prices,” said one aggrieved customer on the B.B.B.’s website. A branch of Oro Gold was one of 11 cosmetics stores that were targeted, and ultimately shut down, by a consumer group in Key West, Fla. The Key West Rip-Off Rapid Response Team organized pickets in front of the stores, said Bruce Mitchell, a co-chair of the group. “It took five years, but the picketing was effective,” he said. “We were successful because the community just wouldn’t stand for it.”

Michael, the Le Caprice employee, said the store is not affiliated with Oro Gold, but Detective Dunn is investigating whether there are connections between the two. “It’s possible they changed the name after the bad press down South,” she said. Still, having aggressive sales tactics is not against the law. Referring to Ms. Bell’s predicament, she said, “It’s an unfortunate situation but, at this point, it hasn’t risen to the level of a crime.”