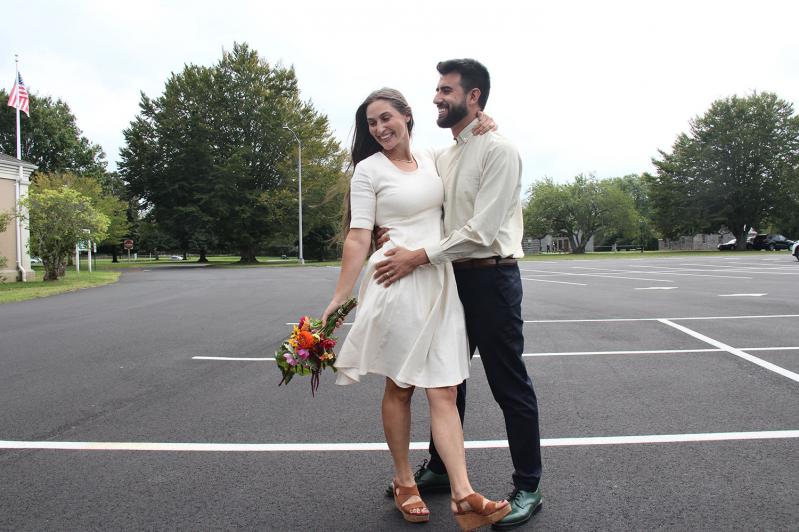 The couple celebrated afterward with their families at Multi Aquaculture Systems, a.k.a. the Fish Farm, on Cranberry Hole Road on Napeague.

The bride is the only child of Vicki Luria and Jay Blatt of Northwest Woods in East Hampton; she grew up in East Hampton. The groom is a son of Christina Fuentes of Brooklyn and Johnny Werbe of Richmond, Calif. He grew up in Brooklyn.

Ms. Blatt and Mr. Fuentes met in Brooklyn in 2010 when he came as a plus-one to a party she was hosting. They will celebrate their 10th anniversary as a couple next month. The bride proposed in 2017 during a camping trip on Santa Rosa Island off the coast of Ventura, Calif., just one of the many corners of the world -- from Calcutta to New Haven to Patagonia -- that the couple’s love of adventure, friends, and family has led them.

Ms. Blatt graduated from East Hampton High School and Brown University, where she studied anthropology with a focus on bioethics in the developing world. She spent summers interning as a reporter at The Star. After several years of working in branding and journalism in New York, her interests turned back to health: She earned a master’s degree in nurse-midwifery from the Yale University School of Nursing in May and will begin a new job as a certified nurse-midwife at Woodhull Hospital in Brooklyn this fall.

The groom is a graduate of Bard High School Early College and Wesleyan University, where he studied sociology and environmental science, and holds a master’s degree in sustainability from City College of New York. His career has focused on occupational and environmental health issues in cities with a special interest in urban agriculture. He is the co-founder of an industrial hemp farming venture in upstate New York.

Ms. Blatt wore a dress from the New York City boutique Meg. Mr. Fuentes wore trousers with a handmade silk shirt he bought on a trip they had made to Delhi. Ms. Blatt's engagement ring as well as the couple's wedding bands were designed and made in the city by one of the couple's best friends, the owner of Tilda Biehn fine jewelry. They will live in Brooklyn.

Pet Food, to Give and to Get
Plan to Repave Part of Route 27 in Montauk
Attention, Comic Book Lovers
END_OF_DOCUMENT_TOKEN_TO_BE_REPLACED