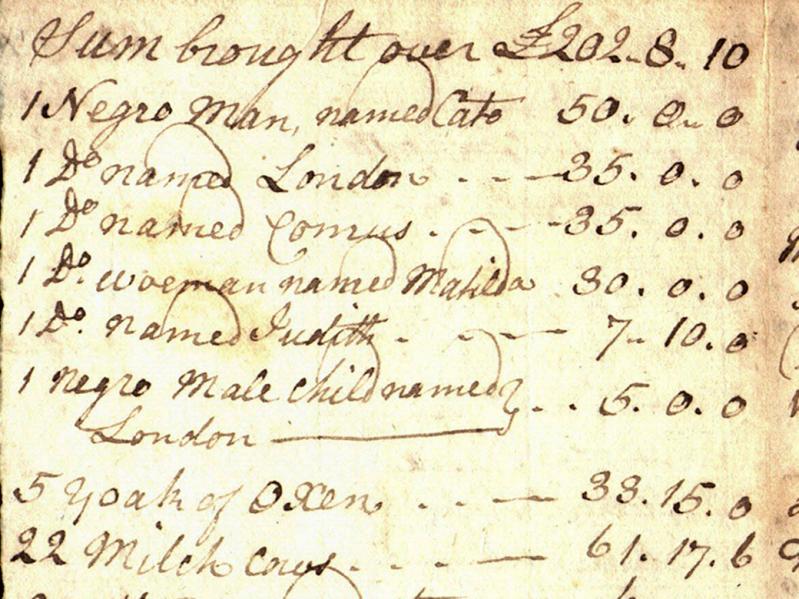 On July 12, 1765, Thomas Dering (1720-1785) created this inventory of his personal effects, along with their value, listed as £700.48. Usually, inventories similar to this are written after an individual's death for tax and estate reasons, but Dering wrote this 20 years before he died. What makes this type of record so useful is that it gives researchers the ability to see the homes and possessions of Long Islanders from Colonial times.

So who was Thomas Dering? He was born in Massachusetts to Henry Dering (1684-1750) and Elizabeth Packer (1684-1747). In 1756, he married Mary Sylvester (1724-1794), who inherited property on Shelter Island when her father died. This estate is well known as Sylvester Manor. In the 1760s, when Thomas Dering's business in Boston failed, the family moved to Sylvester Manor. Thomas managed the manor there while serving as a delegate to the Third Provisional Congress and as Supervisor of Shelter Island. In 1776, when Long Island fell to the British, like many Long Islanders supporting independence, he fled to Middletown, Conn., with his wife and three children.

In his inventory of possessions, there is a wide array of items such as furniture, china, kitchenware, literature, and livestock. Thomas made a few recordings in this inventory that tell a bigger story than his home goods. Six enslaved African-Americans are included — Cato (male), London (male), Comus (male), Matilda (female), Judith (female), and a male child also named London. It is believed that the Dering family left Matilda, 15 to 18 years old at the time, and possibly others, to care for the manor while they fled to Connecticut.

In late 1783 when the British finally left, the Derings returned home to Shelter Island. Those whom they left behind still remained. When Thomas Dering died in 1785, Matilda's ownership passed to his two sons, Sylvester and Henry, and their brother-in-law Nathaniel Gardiner. She was given her freedom in 1795, along with a loan of $75 to build a home.