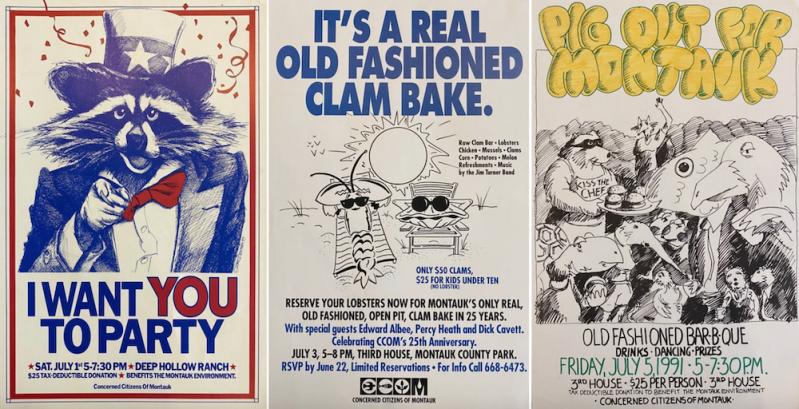 The physical and cultural landscapes of Montauk have been evolving for decades, as shifts in the environment and social scene have wrought even more changes at what seems like a faster and faster rate. One local organization has found itself evolving alongside it.

Concerned Citizens of Montauk is celebrating its 50th anniversary this year. It started out as a small group of residents trying to block

-- and ultimately succeed in halting -- the development of more than 1,000 houses near Big Reed Pond, and has grown into a formal organization with a lot more on its to-do list.

Since 1970, C.C.O.M. has helped usher in the preservation of more than 3,500 acres in the hamlet -- or about 70 percent of its area -- including Montauk County Park, Camp Hero, Shadmoor, and Hither Hills and Hither Woods. It has lobbied against offshore oil drilling and high-speed ferries, saved the Fort Pond House from being sold, helped get the Peconic Bay into the National Estuary Program, and halted toxic dredge spoils from flowing into local waters. C.C.O.M. supported the creation of the community preservation fund in 1998 and, nearly 20 years later, campaigned for the scope of the fund to be expanded to include water quality protection.

In March, just before the Covid-19 virus began to wreak havoc on social and economic norms, the leadership of C.C.O.M. gathered to reflect on the organization's 50 years of service.

"People turn to us, but that was not always the case," said Celine Keating, a C.C.O.M. member since 1990 who serves on its board and co-chairs its outreach committee. "We've brought people together in a way that's really remarkable."

Indeed, "many people frowned on us, called us names" at first, said Shirley Katz, a board member of C.C.O.M. since 1993 and its treasurer for 15 years. "It was a terrible time, and fortunately we are out of it. We are treated differently, but back then, you didn't talk about these things because you never knew who was listening or sitting next to you."

"More pollution of Lake Montauk?" the ad said. "Bulldozing of Indian Fields archaeological sites! Destruction of irreplaceable wildlife, birds, and trees! . . . Support us to plan a better future for everyone in Montauk."

It included a cut-and-mail coupon that said, "I love Montauk and don't want to see it ruined," with a space to write in a donation.

In June of 1971, after the Suffolk County Legislature approved spending $3.9 million to acquire 950 acres as parkland, including an area of Big Reed Pond that C.C.O.M. had fought to preserve, Hilda Lindley was quoted in The Star as saying, "It's quite an improvement over last year's proposition -- that the land be bulldozed for 2,000 houses."

"She got people together. We met in people's houses," Ms. Katz recalled. "Rita McKernan, my neighbor, got me to join. Hilda fought like I don't know what."

Ms. Lindley has been credited as the founder of C.C.O.M. after she brought together the grassroots group for that first campaign. She died in 1980.

One of C.C.O.M.'s latest ongoing efforts is testing of local waters for bacteria, most of which is done by Kate Rossi-Snook, a marine biologist and anthropologist who is an environmental advocate with C.C.O.M., and some is done by students and citizen volunteers. Bill Akin, who was president of C.C.O.M. from 1999 to 2010, said the group evolved from grassroots into a professional organization because "the nature of the issues became more complicated."

Back in the early days, it was parcels hundreds of acres wide that were on C.C.O.M.'s radar, but today, according to Ms. Tooman, it's "three-acre parcels, if that."

"Land preservation is still at the heart of what we advocate for, but on a different scale," she said. "Water quality and coastal issues are more in the forefront. We are still getting a lot accomplished, still on the front lines. Fifty years is a lot of time. Some organizations have lulls, but I don't think we have."

Mr. Braun said the organization's outreach to second-home owners is ongoing, calling them "a new audience who may not be as knowledgeable" about the Montauk environment.

Mr. Akin said he hopes that people begin to realize how important Montauk's resources are. "I'm somewhat frustrated by a lack of awareness and appreciation for the open spaces that exist," he said. "A lot of people don't get much past the beach, the shops, the fishing village, the bars. I wish we could be educating the population that comes out on Friday night."

The Covid-19 pandemic has forced C.C.O.M. to cancel its events, but people can still support the organization by visiting its website, preservemontauk.org, and making a donation.

Ms. Tooman said she believes that "Montauk is so far ahead of the game compared to the rest of Long Island" because of the work of C.C.O.M., but there is more to do.

"Even if you do all this great work to preserve the land, it doesn't mean you won't have issues," she said. "There are still these major issues that will take time and energy to solve."