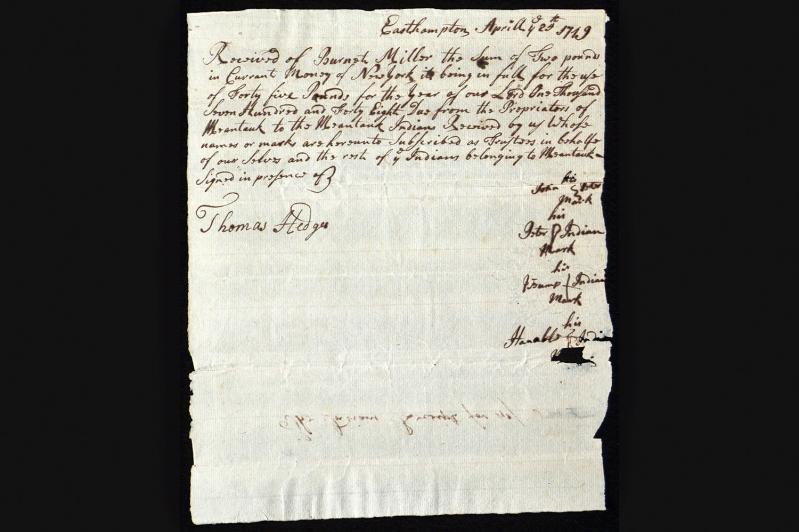 This receipt is for a payment made by Burnet or Burnett Miller for 2 pounds, a payment on the 45 pounds "current money of New York" owed by the East Hampton Town Trustees to the Montauk Indians for the use of land on the Montauk peninsula. The receipt, dated April 24, 1749, indicates that Miller's money was received by "us whose names or mark are hereunto subscribed as Trustees in behalf of our selves and the rest of ye Indians belonging to Montauk."

Thomas Hedges served as a witness, and four individuals were identified with the surname of "Indian." Not all of the Montauk signatories' names are fully legible, but two of them read as "John Indian" and "Peter Indian." Many accounts identify local indigenous people with such a surname. It's possible one of the other names is a phonetic spelling, but it's unclear.

The Montauks who "signed" this document did not use pictographs, but rather a simple mark instead. Other documents signed by members of the Montauk people sometimes include a pictograph-like recognizable signature, but a mark was common for those who were not literate. Typically, the Montauk Indians would sell the trustees and settlers access to land for cattle grazing.

Miller was a prominent resident of East Hampton. Born in 1719, he held the position of town supervisor from 1764 through 1776. He served in the Revolutionary War, and took part in the battle at Ticonderoga. After the war, he and some of his family settled in Plattsburgh, N.Y., where he died in 1797.

Andrea Meyer is the head of collection for the East Hampton Library's Long Island Collection. Questions and suggestions can be emailed to [email protected].